Today’s post is a guest post rom Tom @ High Income Parents. A fellow anesthesiologist and father of five, he has burst onto the blogging scene in the last few months with some wonderful and relevant posts for high-income families.

A number of his articles have landed on the pages of The Sunday Best, and his writing was featured yesterday in a guest post @ The White Coat Investor. I encourage you to check him out!

The following is a dramatization. Names, characters, businesses, places, events and incidents are either the products of the author’s imagination or used in a fictitious manner. Any resemblance to actual persons, living or dead, or actual events is purely coincidental.

The Story of Dr. Moneybags

So you’ve just finished residency a few months ago. You passed your boards (don’t even start thinking about MOC), and you’ve landed your dream job as a private practice physician. Since you’ve continued to live like a resident and your sugar momma/daddy paid the bills while you were in residency, you’ve come out with minimal student loans. You spent the past few month polishing those off and maxing out your retirement accounts.

Since you are a big time specialist now, you are making the big bucks. Let’s put you up near the top tax bracket taking home $470K a year.   So you’ve paid off your loans. You are maxing out your retirement plan at $54K a year (between your contribution, the match and profit-sharing), as well as your backdoor Roth IRA. You work for an amazing group that starts you off with profit-sharing the first year. Oh, don’t forget your HSA at $6,750 since you are married.

You’re an upstanding individual and give a portion of you income away to help those less fortunate than you. Let’s call that $10K donated. You pay 109K in federal taxes and another $14K in FICA.  Let’s say you live in Florida, an income tax free state. There is also $10K getting tossed into a 529 plan each year so your only kiddo can go to college someday. 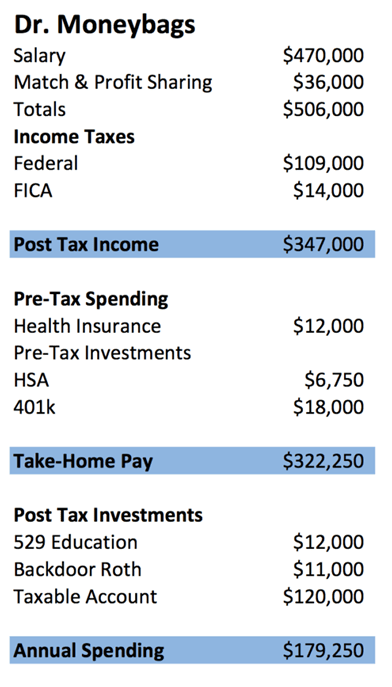 You’re living high on the hog with $15K monthly spending. You have an extra $10,000 a month leftover. Maybe you’ll spend that other $10K on a bigger house or a Ferrari! But no, you are smart, and know that you will grow tired of these material possessions.

You decide to take on Wall Street. Hey, you just graduated medical school and residency in a highly competitive specialty. Plus you finished that fellowship. You are way ahead of your peers who still have $300K in student loan debt and spent their spring break skiing in Aspen drinking $20 cocktails.

Your IQ is in the top 0.1% of smarts.  How hard is it to find some quality companies or even sectors and blow away those pesky Bogleheads with their market returns?

Okay, devote an hour a day to looking at various company prospectuses, watching CNBC and combing the internet for the hot business that no one else has found.  That’s only 365 hours a year.  Nobody will even miss you and you will make millions extra!

So the first year goes by. You’ve been putting in your hour a day, and you pick a few companies to invest in. They are killing it! You are amazing! Some have done better than others but you pull in a solid 15% return.  Phenomenal!

You’re the Oracle of the O.R.

The market in general only went up 7% this year and you more that doubled that.

The next year goes by and you do another 15% return. Dude! This is going like clockwork. Who knew it was this easy?

The years tick by and before you know it, you have ten years under your belt. Your medical practice is solidified and booming. Continuing to jump in and out of the market, you pick the top performing companies almost every year. Well look at that, your portfolio just more than doubled the market return for 10 straight years! Who knew it was so easy?

I mean, sure, you spend a couple of hours each day. It was supposed to only be an hour, but you had to get up early and make sure your trades were entered. Also, you would get on the internet between procedures and clinic patients to look up company financials. Oh, and don’t forget the reading when you got home from the hospital and right before bed each night.

The years ticked by and sometimes you did better, sometimes you did worse. Over the last ten years you average a 15% return.  At the end of the first ten years of your investment career, since you had been putting in $10K a month, you have amassed $1.2 million in principle alone. That is nothing to sneeze at.  With compounding, that $1.2 million is worth $2.78 Million. Or is it?

You pop on the new social networking site SnapFace (which by the way was the IPO you bought last year that absolutely killed it) and see your colleague from residency. [PoF: Darn it! I bought BookChat and it tanked royally!]

He was the guy who told you about those pesky Bogleheads. Look at the poor shmuck! He probably mindlessly followed the Boglehead advice to just bet on the whole market. What an idiot! He probably spent all his time drinking craft beer and kayaking.

He averaged a measly 7% return over the same time. He was a good saver too, but he just threw his extra $10K a month in the Vanguard Total Stock Market ETF (VTI). His taxable account is only worth $1.7 million.  You should have almost double what he has in his account.

The Rest of the Story

But wait. Something is wrong here. You look at your account and by your calculations there should be $2.78 million bucks in there.  Why aren’t the numbers adding up?

Oh, yeah, you remember now. You had to withdraw some funds each year to pay those taxes. Well that couldn’t have made that much of a difference. They are capital gains, right? Oh, short-term capital gains. Wow, so those are taxed at your marginal tax rate. That’s pretty big. What is it, 39.6% plus the other 3.8% ACA surcharge. Ouch!

Hmm, well that Boglehead guy probably had to pay some taxes. Let’s calculate that. Since he invested everything in VTI, the dividend yield was 1.7% and that was taxed at the long term rate. That drops his 7% return to 6.6% after taxes. That is only a 0.4% tax drag.

What about your return?

Well, you made 15%, but when you took out your 43.4% of gains, your account dropped that years return down to 8.49% . Okay, okay, that hurts but you still did better that the average. If you put all the years together that still is a better profit of over $216,000 than the Boglehead.

Or was it? How many hours did you put into all the research and trading? How often did you get up early and stay up a little later just to research your trades and companies? If you are honest, the average was two hours a day worrying about trades and researching.

You start wondering what the hourly rate was on all that time. Aren’t you are a doctor for goodness sake! You have a certain set of skills that is highly compensated. Your time spent on stocks should at least be worth that!

That’s a small fraction of what you earn at your day job. There are lots of people making that much an hour, but they don’t have an M.D. after their name. Since you earn about $200 an hour right now you could have worked about a quarter of that 7,300 hours seeing patients and made the same amount after taxes. 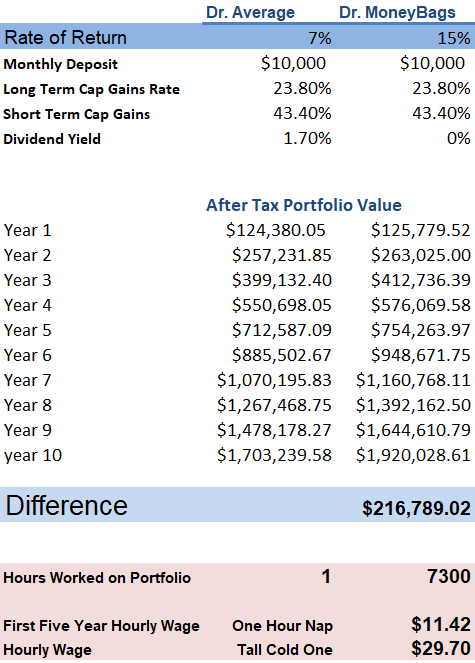 I know that this is only one example, but I think it’s is a reasonable one. The takeaway lesson here is yes, you are smart. You passed thousands of hours of training and tests. But….

The percentage of return here is arguably better that 99% of fund managers who look at the market and businesses for a living. Their entire day is devoted to researching and trade execution. They have a team of analysts combing the world for the next hot company. It’s rare that any of them beat the market over a ten year stretch.

Even if you are the next Warren Buffet (who didn’t make his money by buying stocks from a brokerage account), you don’t have enough money to leverage when you first start for it to be a worthy endeavor.

Over the first five years the return is $11.42 an hour. Would you take on a part time job for that wage? I don’t think so.

There are much better ways to spend your time and the odds of losing money are much greater than making a profit when you attempt active management.

Go volunteer your time somewhere. Go read a book to your kids an hour a day. That will truly pay way more than researching individual companies and getting up early to make sure your limit order is placed correctly.

What do you think of this scenario? Does it ever make sense to actively manage an account?

[PoF: Were you as relieved as I was when we got to the end? It started to read like a pro-stock-picking, anti-index-fund post. Of course, Tom came to his senses and recognized that repeatedly destroying the indexes is an extraordinary feat that mere mortals fail to do time and time again (just like the pros).

Not only do stock-picking fund managers and individuals usually fail to beat the indexes (and / or fail to replicate that success after they do), but the tax implications for the high-income professional make buying and selling stocks even more likely to be a loser’s game. Be like my current houseguest and Learn to Stop Picking Stocks and Love Index Funds.]

51 thoughts on “The Story of Dr. Moneybags”