The U.S. Dollar is the strongest it’s been in 20 years. A strong dollar can produce winners and losers, both in America and on foreign soil.

What can you do to ensure you’re among the winners?
Certain activities will be relatively less expensive, as will some goods and investments.

There are also business types that can prosper in this climate and others that will struggle.

Let’s explore five ways you can take advantage of this strong dollar while it lasts. Note that I’m not saying that you should do any or all of these things, so this is not a list of recommendations, but rather a list of activities and ventures that make more financial sense to do now as compared to a time when the dollar is weaker. 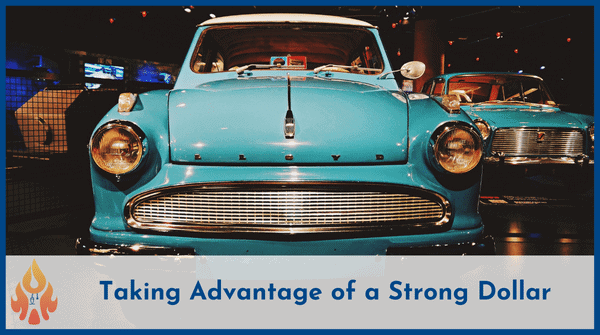 What Is a Strong Dollar?

When we talk about a strong dollar, we’re indicating that a U.S. dollar buys more foreign currency than it normally does.

Anecdotally, I can see that the dollar is stronger in Europe than it was fifteen years ago. I recall trading about $1.35 for one Euro and about $2 USD to buy one British Pound in 2007. Visiting Europe in the fall of 2022, one Euro was worth slightly less than one U.S. dollar, and the British Pound cost me just $1.14. These numbers have softened a bit very recently, but we were able to take full advantage beforehand.

Why the Dollar is Strong

The U.S. Dollar is still seen as the world’s reserve currency. While it is fashionable in some circles to predict that cryptocurrency or a different country’s money will soon replace the dollar as the dominant world currency, what we’ve seen in 2022 is evidence that it’s unlikely to happen anytime soon.

When economies look shaky and recessions appear to be imminent, there is a “flight to safety” to invest in U.S. Dollar-based assets. The recent series of Federal Reserve rate increases has led to stronger yields for U.S. government-issued bonds, which also attracts people around the world looking for a safe place to park funds.

Global macroeconomics is a bit more complex than that, but those are two primary reasons we’ve seen the U.S. dollar grow more valuable than many other currencies around the globe in 2022.

Just How Powerful is This Strong Dollar?

In the fall of 2022, the U.S. Dollar and Euro have been roughly equal in value, with each currency taking turns being worth a few pennies more than the other.

A British Pound has cost anywhere from about $1.07 to $1.20. The cost of a New Zealand Dollar has generally been 50-some U.S. cents, an Australian Dollar 60-some cents, and the Canadian Dollar 70-some cents.

An easy way to compare the U.S. Dollar to a broad basket of global currencies is to look at the U.S. Dollar Index. While the index had a rough couple of days after it was announced that inflation was lower than expected (boosting the stock market but weakening the dollar), the index has had a strong 2022 and is up about 11% year-to-date in what is essentially a zero-sum game.

The Downsides of a Strong Dollar

The strong dollar isn’t good for everyone, obviously, and that’s true even within the United States.

U.S. businesses that do a lot of business overseas may be getting paid in weaker currencies when they sell their goods and services. The same is true for large, multinational companies that are headquartered in the U.S.

Foreign companies who have debt denominated in U.S. dollars may have a tougher time making those debt payments, as their local currency in which they operate is worth less.

The U.S. tourism industry also takes a hit, as those from other nations find it more expensive to vacation in America due to the strong dollar.

In essence, any person or entity who needs to trade a weakened currency for U.S. dollars for any reason is negatively impacted by a strong dollar.

Taking Advantage of a Strong Dollar

Now that we know where we are and how we got here with our “George Washingtons,” let’s look at ways we, as investors and consumers, can take advantage.

Once you arrive to your foreign destination, you’ll find that your dollar goes a lot further than it once did.

As an example, when I visited Europe with my then-fiancée in 2007, I recall trading about $1.35 for one Euro and over $2 U.S. Dollars for a British pound. Compare that to today’s costs outlined above, and you can see how a trip in the fall of 2022, which we’re currently taking, is much more affordable.

Accommodations, food, drinks, museums, transportation, shopping…. all of it. Our savings are offset by the fact that we’re now traveling as a family of four, but the cost of attractions, goods, and services are noticeably cheaper than they were fifteen years ago.

If you’ve been itching to travel anywhere outside of the U.S., try to do so while we’ve got the luxury of a strong dollar.

As a current Michigander, it’s my duty to say buy American-made, but… I can’t ignore the fact that any auto priced in a foreign currency is a better deal now as compared to when the dollar was weaker.

Since, by law, individuals can only import cars that are at least 25 years old thanks to the Imported Vehicle Safety Compliance Act of 1988, buying a foreign classic isn’t exactly hurting U.S. automakers, anyway. Additionally, U.S. automakers are struggling to keep up with demand for new vehicles amid supply chain issues.

I’m not saying that you should buy yourself a Porsche 911 that was never made available in the U.S., but if you’re going to do it anyway, you might as well do it when your dollar is worth more Euros than it normally is.

If Japanese vehicles are more you’re style, here’s a list of 10 affordable used cars from 25 or more years ago that might suit your fancy and turn heads.

You can invest in foreign real estate in any number of ways. The easiest would be to invest in an international REIT like Vanguard’s Global ex-U.S. Real Estate mutual fund or ETF.

If you’re interested in actively managing investment real estate or purchasing a place for your own use, there are plenty of law and real estate firms set up to assist U.S. citizens and attract their dollars in just about any place where you can legally buy real estate as an American.

If a second passport or foreign residency or citizenship is a part of your long-term plan, citizenship by investment plans look more attractive in times when the dollar is strong.

I’d be lying if I told you I haven’t browsed Spanish real estate on Idealista in recent months. I wouldn’t want to be a Spanish citizen and pay their wealth tax and high income tax rates, but a Golden Passport that gives me unlimited time in the Schengen Area sounds awfully appealing at times!

Once again, I’m not recommending you import or export any of these things, but a business that primarily imports goods to the United States will be better positioned to do well when the dollar is strong.

It can take years to go from idea to execution when starting a business, sourcing materials, arranging manufacturing, etc… To truly take advantage of the strong dollar, it makes the most sense to focus on a product that’s already being manufactured and can be imported in bulk relatively quickly. An Amazon dropshipping business can be set up rather swiftly, for example.

I’ve taken advantage of the strong dollar by traveling to Europe where we traded U.S. Dollars for Polish Złoty, Swedish Kroner, British Pounds, and of course, Euros.

How will you take advantage of a strong U.S. Dollar?