Pull up a comfy chair, have a seat next this cozy FIRE, and listen in as Dave Denniston and I have a Physician Fireside Chat with Physician on FIRE  on the Freedom Formula for Physicians Podcast.

OB / Gyn Kirti Patel, MD makes an evidence-based decision to step away from her practice, as described @ Medium in A Personal Post: Living the Scientific Method.

Last week, I featured a bit of satire regarding the homeless and early retirement. Today, we have a more heartfelt post from Lyn Alden who has truly been homeless (and not by choice). What Being Homeless Taught Me About Money and Happiness from Budgets are Sexy.

Let’s talk about my favorite funds: index funds. Could The Popularity Of Index Funds Reach A Danger Point? from Andrew Hallam of Asset Builder.

More on the topic from the Wall Street Physician: Race To The Bottom: Will The Price War Between Vanguard And Fidelity Lead To A 0.00% Expense Ratio Index Fund?

What can we expect from our stock-heavy portfolios in the coming decade? An opinion based on some serious methodology from Big ERN, Ph.D. of Early Retirement Now. U.S. Equity Returns: History and Big ERN’s 10-Year Forecast

You may not want to rely solely on equity returns to fund your future. Enter the Millennial Money Man with a though guide on How to Make Passive Income: A Guide for Real People.

A U.S. based physician plans to travel the world while earning physician income. How will Dr. Mo pull off this feat? Location Independent Income Put Into Practice. A Guide For Earning an Income While Living Abroad.

The ChooseFI guys like to ask listeners to share their frugal wins. Yesterday, my musings on frugality for physicians were featured in a repost on The White Coat Investor entitled The Frugal Physician: Self-Serving or Self-Denying.

In summary, I suggested the day-to-day little choices make little difference in the long run when you earn a salary in the multiple six-figures. But if it feels good to spend less, by all means keep doing what makes you happy. It’s the big expenses that make a real difference in your pursuit of FI, though.

We’ve reached a point in life where we don’t benefit greatly from saving a few dollars here or a few hundred there, but we’re pretty much hardwired to celebrate those little victories known as frugal wins, and despise wasteful spending. This week, we had a couple frugal wins.

We’re spending the week at our cabin, which is near a town that’s not exactly thriving, despite the natural beauty all around. The local K-Mart is closing, and that means deep discounts that the frugal physician cannot resist. Frugal Wins galore! 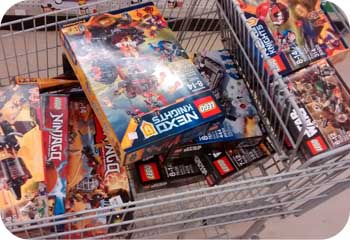 All toys, including Legos, were 50% off. Now, if I wanted to take full advantage of this anomaly, I could have bought every set on the shelf, shipped them off to Amazon to be sold at 25% off, and made a healthy profit. But it would have been a hassle, and not all that much fun.

Instead, I bought one of each set from the series they’re into (I wasn’t done yet when I snapped that pic), and we’ve got gifts for our boys and their friends for birthdays and Christmas for several years to come. You could say I saved over $300. You could also quite accurately say I spent over $300. Either way, I’ve never seen a single brand new Lego set half off, let alone every Lego set in sight half off, so I couldn’t help but take advantage.

About six years ago, I saw this amazing nine foot long mid-century modern couch for sale on Craigslist, and I thought it would look great in our cabin. I picked it up for $175, refinished the wood, and had a professional rehab and reupholster the sofa. When all was said and done, it was about a $900 couch, but a really swanky one at that.

After a few years, we noticed a split in the fabric. Then another. And another. By the time this summer rolled around, the darned thing was half covered in duct tape. The fabric we had used was clearly not a good choice — anywhere it was pulled taut, the upholstery was at risk of coming apart. I was afraid to look at it.

To have it redone again would have meant hauling the beast out of our little second story cabin, down the stairs, and into town, where it probably would have had to wait until after all the boat work was done (the upholsterers primary business in the summer) to be fixed so we could pick it up next spring. Not to mention over $1,000 in labor and materials. 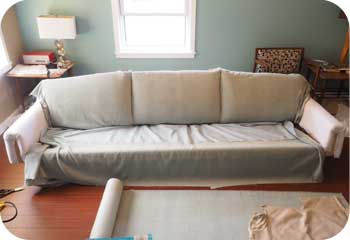 Instead, my wife and I decided to give it a shot ourselves. Armed with a sewing machine and, a staple gun, and a few other handy tools, we knocked it out over parts of three days and under $300 in materials, most of which was fabric. The buttons were pressed by the professional (for 50 cents apiece!), but we did the rest ourselves. 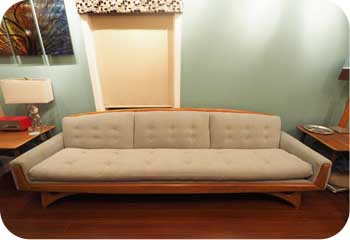 While one could easily argue that our time would be better spent on other endeavors, taking on a project like this is quite satisfactory. Yes, I earn enough in a day to pay for a new couch or to have this one completely redone, but I’m not looking to work more at this point. I’m looking to work less.

I picked up some new knowledge and skills that I just might use again someday. Believe it or not, we have this exact same couch at home, still in the original 1960s burnt orange upholstery.

You’re still not using Personal Capital? Track all your accounts in one place like I do.