A new year is upon us, and I can’t think of a better time to look back and take stock of what we’ve got in the portfolio and analyze its performance.

We dealt with the lingering threat of raising interest rates from historic lows. There was the Brexit vote, which rocked the markets for about a week, then completely blew over. We had a vote of our own in November that had profound effects on the markets. After it looked like the bottom was falling out in the overnight futures, the markets recovered and major indices have seen record highs in the closing weeks of the year.

I’ll start with a review of the retirement portfolio, since it’s been the better part of a year since I first shared it with you. The following spreadsheet tracks our balances in percentages and is current as of the end of the calendar year, 2016. 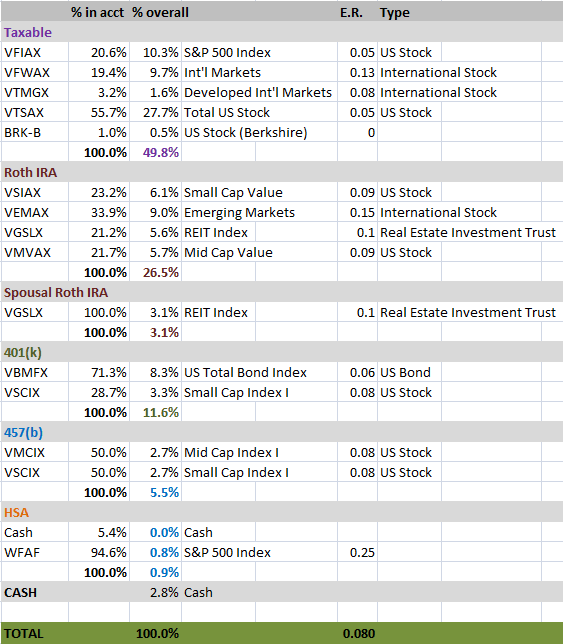 This retirement spreadsheet includes our taxable account, Roth IRAs, HSA, and two retirement accounts. What you don’t see are the 529 accounts, our donor advised funds, or our microbrewery investments. I don’t plan on using those in retirement, save for the perks as owner and lender to the breweries. #freebeer

Our first and second home are not included above, although I do add them in when we calculate our net worth.

The portfolio is right where I want it to be in terms of asset allocation. We’re a little cash heavy as I am about to invest $10,000 to the 529 accounts, $5,500 each to two Roth IRAs via the “backdoor,” and will be making my monthly taxable account investment. Furthermore, my first few paychecks of 2017 will be on the small side as I front load my 457(b), so it’s nice to have built up a cash reserve.

Here’s the spreadsheet’s breakdown of my current and desired asset allocation. REIT is a bit deceptive, as there is some overlap between small-cap US stocks and REIT. While I look underweight, Personal Capital reminds me that I’m actually a little overweight. 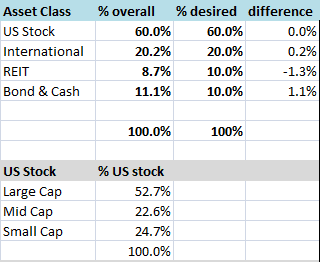 You’ll notice a tilt to mid and small cap stocks. Based on market capitalization alone, large cap stocks would be closer to 80% of the total. I don’t have it broken down in the spreadsheet, but I also tilt to value stocks within the mid and small caps, with the index funds in my Roth account being value funds.

2016 Returns for the PoF Portfolio

Let’s take a look at the You IndexTM  representing my entire portfolio, provided by Personal Capital, which is plotted against the S&P 500.

Personal Capital likes to make you feel good about yourself by apparently reporting the S&P 500 returns without dividends reinvested. With dividends reinvested, the S&P 500 actually returned 11.96%. So we didn’t win, but came pretty darned close. Considering we were well diversified with a 10% bond allocation and 20% international, I’d say we did well to approach the returns of the S&P 500.

At the end of the year, the orange line does come out on top. For much of the fall, my portfolio was ahead by 3% or more, but that all changed on the second Tuesday in November. US stocks have solidly outperformed other classes since then.

Winners in the PoF Portfolio

Small cap value stocks had a banner year, with VSIAX ending the year up nearly 25%. The fund had outperformed large caps by a few percentage points, and really took off after the election. It’s easy to see the launch point towards the end of the year.

Mid cap value stocks followed a similar pattern but to a lesser extent, with VMVAX finishing up just over 15% on the year.

Losers in the PoF Portfolio

Impressively, no asset class lost money for me this year. There were a couple that underperformed, though. Which were the bums that only returned a few percent or less?

Developed international markets were not terribly exciting this year, unless you found the Brexit scare exciting. In hindsight, it was but a blip. Just a drop in the Thames when looking at the broader picture. Can you even spot it?

After a series of ups and downs, my developed markets fund, VTMGX, finished up 2.43%. International stocks are trading at much lower P/E ratios compared to their US counterparts. Time will tell if this proves to be a buying opportunity, but it is fair to say that developed market stocks look relatively cheap right now.

The 10% bond allocation in my portfolio is held entirely in the Vanguard Total Bond Market index fund, VBTIX. It eked out a 0.14% gain this year, after being a top performer for the first 5 months or so, slowly gaining in value while stocks lost around ten percent early in the year. The graph certainly demonstrates how a bond allocation acts to “smooth” your returns compared to more volatile investments.

Speaking of volatility, a couple classes didn’t perform particularly good or bad on the whole, but took me for quite a ride over the course of the year.

Let’s look at emerging markets first. Recall that half of my international allocation, or 10% of my portfolio is invested in this asset class. Yes, I do enjoy rollercoasters.

My emerging markets fund, VEMAX, ended the year up 11.72% but for about four months looked quite dominant. When did it change course abruptly? Right after that election. Are you seeing a theme yet?

One more class that also comprises approximately 10% of my portfolio is REIT. These are interest rate sensitive. They gained when rate increases were postponed, and fell when rates were on track for an increase.

Vanguard’s REIT index fund, VGSLX gained 8.47% for me by year’s end, but over the summer was outpacing stock funds by about 10%. It will be interesting to see the performance in the coming years as interest rates presumably rise.

I’d say it was a great year. Returns of 11.5% in the portfolio were enough to cover our annual spending (post coming soon!) three to four times over. Returns were slightly ahead of long-term averages and well ahead of what most forecasts predict for the years and decades ahead.

The tilts served me well last year. Having a higher proportion of mid cap and small cap value stocks compared to their market capitalization worked out in my favor as the year came to a close.

My tilt to emerging markets within the international allocation also served to boost my return in 2016. Despite a downturn at year’s end, emerging markets ended the year with returns nearly identical to that of the S&P 500, while developed markets lagged behind significantly.

Blue for the win! Taking all my funds into account, along with the percentage I have in each shows a long-term advantage over the S&P 500 (145% versus 130%) if you consider 16 years to be long-term. Note that there were brief periods after each of the two big downturns where blue dips below orange. In other words, this is not the best asset allocation to be holding in a bear market, but it has performed well when the markets are rising.

Do I need this many funds?

I could have similar returns with a simpler portfolio, without a doubt. Some of the complexity comes from tax loss harvesting, which results in me holding four funds in the taxable account, rather than two. Also, I added Berkshire Hathaway stock for its no-dividend feature, and for the “free” tickets to the annual stockholder’s meeting in April.

Additionally, only certain funds are available to me in my 401(k) and 457(b). In both of these accounts and in my Roth accounts, I intentionally avoid holding substantially identical funds to those which I hold in the taxable account, so as to avoid a potential wash sale when dividends in the tax advantage accounts are reinvested, or when automatic investments are made.

I fully anticipate having a simpler portfolio in early retirement. Maybe not three fund portfolio simple, but I should be able to whittle down the number of funds a fair amount.

If you sign up for Personal Capital via any links on the page, I receive a commission that will help support the site’s charitable mission. I appreciate your role in making it happen!