We humans would love to be able to see the future.

That need naturally makes us gravitate toward experts and forecasters who tell us what’s likely to happen, to peek around the corner.

But the hard-learned truth of investing is that no one knows anything and anyone can predict anything.

In this post, from Of Dollars and Data, we see how in investing prognostications, even a broken clock can be right twice a day. 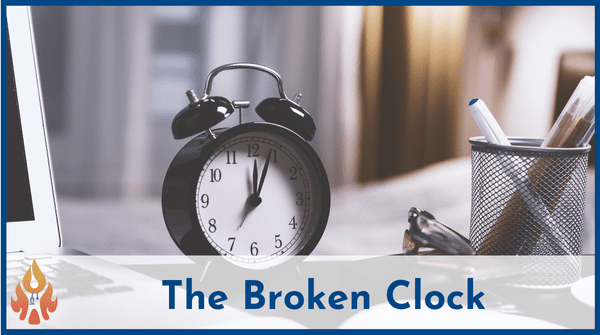 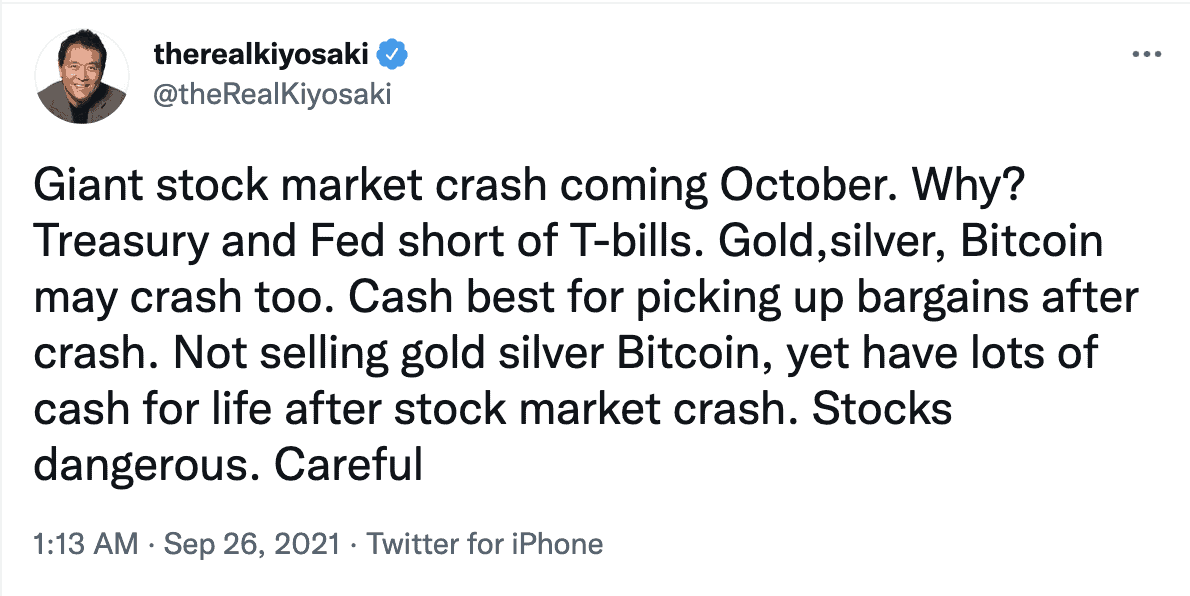 Unfortunately, this isn’t the first time that Kiyosaki has called for a major crash in the last decade, as FinTwit was quick to point out.

As soon as Kiyosaki sent his tweet, the replies started pouring in. Luc ten Have beautifully responded with this chart showing the increasing price of the S&P 500 alongside all of Kiyosaki’s prior incorrect calls:

Cullen Roche took a huge screenshot of all Kiyosaki’s wrong tweets together as a sort of mosaic of failure. And my favorite response came from my colleague Ben Carlson who simply stated:

I don’t mean to pick on Kiyosaki because many others have made equally wrong predictions in the past. But, Kiyosaki is the most popular person doing it, and as the chart above illustrates, he has been doing it for a long time. Given the size of Kiyosaki’s audience, it’s irresponsible for him to call for crashes so often, especially considering that he is trying to help peoplewith their personal finances.

One Day, He’ll Be Right

But the real tragedy here is that one day he will be right. One day a crash will come and Kiyosaki will take a victory lap for all to see.

Will his prior incorrect calls matter? Not at all. You can try to point out his flawed track record, but it won’t make a difference. Most people aren’t going to see your reply. But what they will see is his tweet. They will feel the pain from the crash after it happens and then they will think, “Kiyosaki knew it all along.”

Oh he got it wrong eight times before? Who cares? He is right now, isn’t he?

The saying goes that even a broken clock is right twice a day. Well, if that clock happens to predict the next time you could lose money, you still might listen. It doesn’t really matter that the clock doesn’t work all the time, does it?

Because, as I have stated before, failed predictions don’t matter. They don’t seem to have any impact on someone’s brand. If failed predictions mattered then people like Scott Galloway, John Hussman, and Robert Kiyosaki wouldn’t have their audiences. But they do. They do despite being wrong so many times. How can this be true?

Because most people don’t care about the objective truth, they just want an answer. Any answer will do. And the more confidently you can provide that answer, the better. It reminds me of the famous reply given to the Nobel laureate Ken Arrow after he discovered that his long term weather forecasts were no better than chance:

The Commanding General is well aware that the forecasts are no good. However, he needs them for planning purposes.

So, while we are all enjoying a good laugh at Kiyosaki’s expense today, he will have the last laugh in the long run. Not because he will be right eventually, but because he knows that people want predictions. They crave them.

This explains why the biggest story in FinTwit right now is about a hamster who is beating the S&P 500 by trading cryptocurrencies. The hamster, known as Mr. Goxx, has been trading from the Goxx Box, a room outfitted to turn his behavior into actual trades. Mr. Goxx uses a hamster wheel to select a cryptocurrency and two decision tunnels to either buy or sell that particular cryptocurrency: 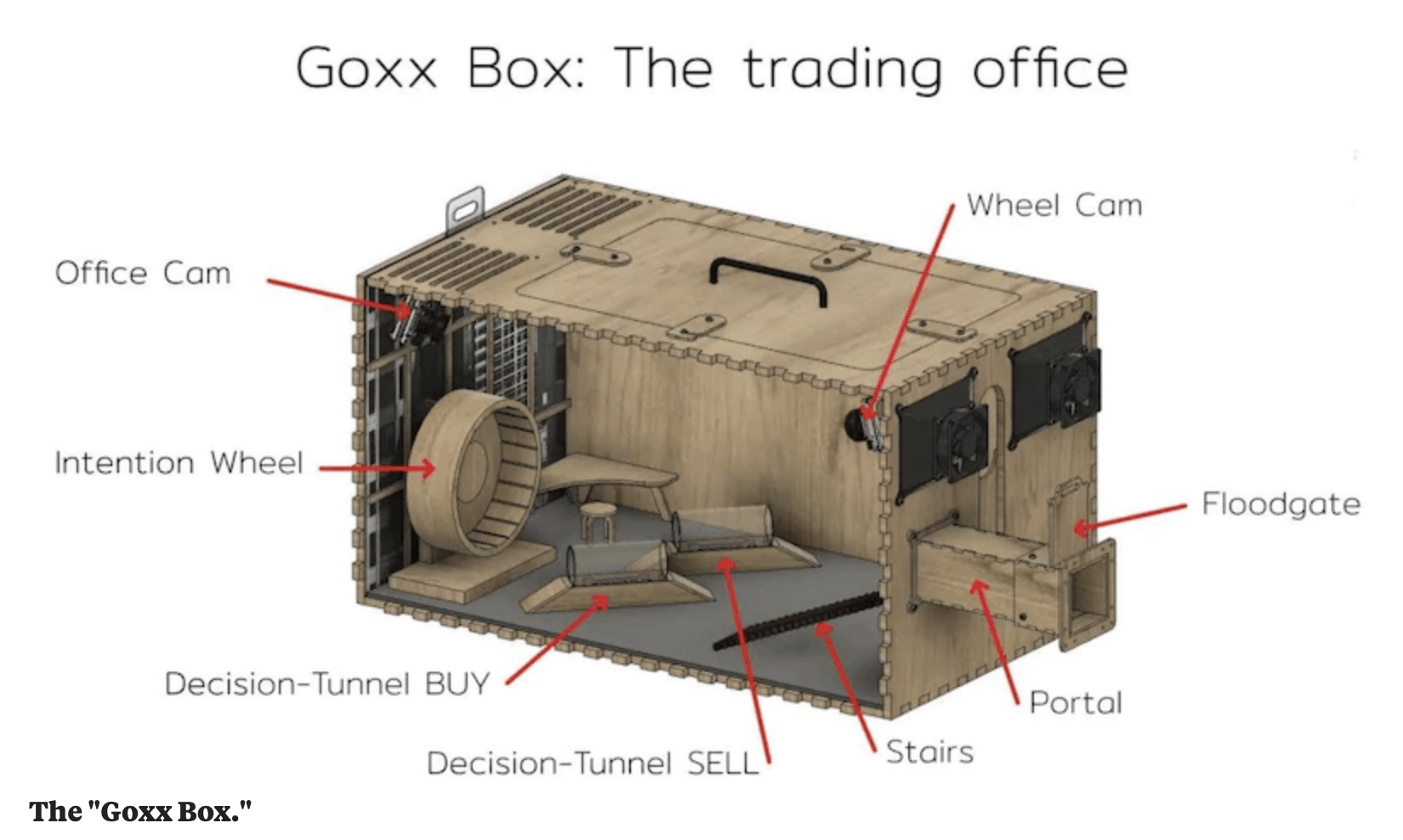 We both know that these trades are completely random, but that hasn’t stopped Mr. Goxx from growing a following. The fact that he is beating the S&P 500 only tells me that a random selection of cryptocurrencies would probably have beaten the S&P 500 as well. If this is true, then case closed. Mr. Goxx is merely an entertaining random number generator.

But what if a random selection of cryptocurrencies hasn’t beaten the S&P 500? Even then, there is still an easy explanation for this—survivorship bias.

While Mr. Goxx has done well against the S&P 500, where are all the other trading animals that haven’t done so well? Where’s the Crypto Chameleon? Or the Bitcoin Bunny? Or the Ethereum Eel? Let me guess. They didn’t do so hot so no one talked about them and they didn’t gain any publicity. Shocking.

But we’ve seen this story before. Remember Paul the Octopus who correctly called 12 out of 14 matches in the 2010 World Cup? Just replace “World Cup” with “cryptocurrency” and the octopus with a hamster and welcome to 2021. After all, how many animals were outfitted with these prediction rigs in the first place? We have no clue. As a result, we only hear about the lucky ones.

But, this is the oldest trick in the book. Financial companies have been doing it for decades and many still do.

For example, let’s say you want to raise a bunch of money to start a fund. You want to know the easiest way to do it? You try out 50 different strategies over the next three years. How do you come up with these strategies? It doesn’t matter. Throw darts at a wall full of tickers for all I care.

After 3 years, you close down the 48 worst performing strategies and go on a roadshow promoting the best two. Make sure that you create an entire narrative for how these two strategies came about and how they will continue to provide consistent alpha into the future. Of course, this narrative is created after the fact, but who needs to know that? Just praise your systemic process and your thorough level of diligence and the rest will take care of itself.

Voilà! Now you’ve got a billion dollars on your hands and your investors are none the wiser. Do they need to know about the 48 strategies that failed behind the scenes? Of course not, don’t be silly. By the time they realize you aren’t as good as you say you are, the checks will have been cashed and you will be enjoying your life, preferably on a beach somewhere.

This game has been around a long time because it works. It works for funds, it works for animals being promoted as oracles, and it will work for Robert Kiyosaki. There’s always a market for broken clocks. Just make sure you don’t get sold one.

Thank you for reading!