As a seeker of financial independence, have you placed FI status on a pedestal? Do you see it as a solution to a slew of problems you’re facing?

If so, Dr. Jim Dahle says, you may very well be disappointed when you get there. Maybe not as disappointed as the crooks who drank from what they thought to be The Holy Grail in Indiana Jones & The Last Crusade, but still, it could be more of a letdown than a cure-all.

Dr. Dahle first shared his thoughts on this topic before he was financially independent and revisited the post with a recent update now that he’s easily post-FI. He’s sort-of-happy to report that his original hypothesis does indeed ring true. Rather than focusing on reaching FI, it’s best to fix what’s not working for you in your life right now. 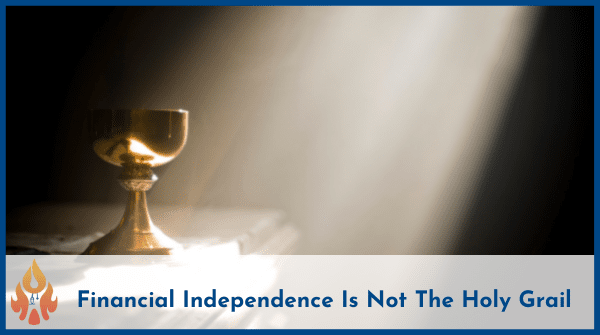 In the financial blogosphere becoming financially independent and sometimes retiring early seems to have become the end-all and be-all of our financial, and sometimes even non-financial existence. I think we’re giving it too much credit.

What Is Financial Independence?

First, let’s define financial independence. We’ll do it very simply—you can live the rest of your life without changing your lifestyle or receiving earned income. Traditionally, using the 4% rule, that means having a portfolio that is something like 25 times what you are actually spending.

If you have passive sources of income (Social Security, pension, rental property, etc.) then a portfolio 25 times the difference between your spending and your reliable passive income.

Now, let’s assume you have a portfolio that is 24X your income and so you work and save a little more and compound interest does its thing and WHAM! You hit your number, 25X, and you are now FINANCIALLY INDEPENDENT! You’re FREEEEEEE!

The next morning you go into work, flip off the boss, moon your co-workers, take your Bobblehead dolls out of the cubicle, and you’re off to a life of leisure, fulfillment, and happiness!

Really? That’s how this is supposed to work? I just don’t buy it.

Hitting your number isn’t going to increase your happiness much, if at all. Hitting that number allows you to do only one thing that you couldn’t do before hitting it—stop working. If stopping work is going to dramatically increase your happiness, I would submit that you have allowed yourself to live a terrible, regrettable life. Life is short, you cannot plan to live a significant portion of it doing something you detest and expect to have a happy life.

“Instead of wondering when your next vacation is, maybe you should set up a life you don’t need to escape from.”

My Perspective on Financial Independence

Let’s take a look at financial independence from my perspective since that’s the person I know best. I may or may not be financially independent. It really depends. As George Foreman says, “The question isn’t at what age I want to retire, it’s at what income.”

If I had to retire 5 years ago, when this post was first penned,  on just the investable assets we have had accumulated at that time, we could do have done it for the rest of our lives. We would have had an income higher than that of the average American household. But that would be have been a significant drop from our then current standard of living.

In 2016, I was certainly independent of any need to practice medicine given the income from WCI since it now makes more than my practice, but in some ways, I’m just exchanging one job for another. The retirement police would deny that’s really retired.

I don’t really know what this site’s residual income would be if I quit writing, interacting with others, going on speaking gigs, marketing, writing books, and writing for other sites and publications. I would guess I would still get at least half the income for quite some time, which we could also quite comfortably live (and save) on. But in reality, given our desired lifestyle/spending, if we had to support it just from investable assets in 2016, we would have been just fine.

Guess what? I no longer care.

Over the  years, I’ve been trying to mold my life into exactly what I want my life to be. I cut back from 15-16 shifts a month to 12 (and now 8). I no longer work the overnight shift.

I’ve offloaded many of the unpleasant tasks associated with WCI onto others. I’ve scheduled more trips. In fact, as I write originally wrote this we are were en route to Zion National Park to do some canyoneering, my fourth of nine trips/vacations in a three-month period.

About half are with my family and the rest are “adventure trips” with friends. I have nearly aligned my actual life with my ideal life. Being financially independent today doesn’t change my life or my happiness level one iota. As I think of ways in which my life would be even happier, I implement them.

Crossing the threshold to financial independence did not make me any happier. In fact, it may have made me less happy. Mo’ money, mo’ problems. The more money and stuff you have, the more time and effort you have to spend taking care of it.

It is certainly harder to motivate myself to work as I have to rely SOLELY on my passion to do so, rather than my passion plus the improvement of my financial situation as it was prior to FI.

How Much Money Is Enough?

So what’s the point of this rant? The point is that you need to figure out what is going to make you happy, and then work toward that goal. Maybe for you that does not include any paid work. Maybe it involves cutting back at work, changing jobs, or dropping some unpleasant duties. 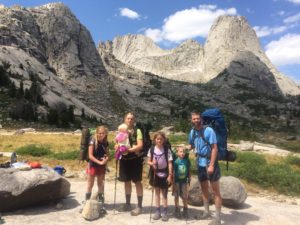 How much income is enough? How much net worth is enough? Once you have those numbers, it will be easy to see that, most likely and for most readers of this site, that you will hit those numbers long before you actually want to stop working.

I would submit that financial security comes before financial independence and that it is really financial security that adds to your happiness. Once you have maxed that out, your life is not going to get any happier from financial sources, no matter how much you make, have, or spend.

If you want additional happiness, you will have to seek it outside the financial realm. As Bogle related in his book, Enough,

The Good News About Financial Independence

There is some good news out of all this.

What do you think? Do you think financial independence is oversold? Are you financially independent? Did hitting that point make you dramatically happier?

8 thoughts on “Financial Independence Is Not The Holy Grail”