Quote unquote “quiet quitting” was never a viable option as an anesthesiologist, but I can see where it makes sense as a concept for some, based on how The Fioneers explain it. The Case for Quiet Quitting.

Some people quit more loudly and completely, like the 29-year old FI Mechanic. I don’t want to work anymore, so I quit.

Should he quit when they’ve hit their FI number as a dual physician couple or work 4 more years for the lifelong benefits? The dilemma discussed in FIRE Crossroads 033: Government-Issued Golden Handcuffs.

Why do we spend so much time reading about money, thinking about money, earning money, and getting the most for our money? The Blissful Budget starts with a more basic question. Why Does Money Exist?

There are a lot of falsehoods surrounding money. Rick Kahler with Advisor Perspectives lists 15 money facts in What is True About Money?

Can money make you happy? The White Coat Investor shows us 3 ways in which it can. Buying Happiness: 3 Lessons for Physicians from the Literature on Happiness.

Money could help buy the ticket to the life of your dreams, but it’s going to take more than money, as Passive Income MD points out. What’s Keeping You From Your Dream Life?

A latte a day is unlikely to be the culprit, but Michael Morris with Pursuit of Passive Income suggests you be on the receiving end of that common transaction. Starbucks: Buy the Real Estate, Not [Just] the Coffee.

No bear market has reached a new low after recovering half of its losses, suggesting we’re out of the woods. On the other hand, high inflation is never tempered without a recession. Ben Carlson with A Wealth of Commons Sense looks at this difficult duality in Exceptions to the Rule.

Speaking of exceptions to the rule, how hospitals and physician practices get paid via insurance is completely bonkers. The Investing Doc explains Why The Rate Negotiation Process With Insurance Companies Is Broken.

Your house is worth a lot more than it was two years ago. That’s generally a good thing, but The White Coat Investor wonders, Is the Wealth Effect Making You Think You’re Rich?

If having millions of dollars makes you rich, these five folks interviewed by ESI Money make the grade.

I’m spending about $800 to spend 3 nights in a hotel next week, and Our Woven Journey says I’m doing it all wrong. Save Money on Hotels: Book Redweek Resort Rentals Instead.

Does a Timeshare Ever Make Sense?

I’ve written exactly one post on Timeshares, and it’s titled A Timeshare Presentation Survival Guide: Getting to “No”.

That would indicate that I’ve taken a pretty staunch anti-timeshare stance, but that’s not exactly true. I do firmly believe that you should not buy a timeshare directly from the salesperson working for the company when they give you their timeshare pitch.

That’s exactly what Dr. Cory S. Fawcett did as a resident about 30 years ago, and while he regrets the manner in which he acquired his 2-bedroom lockout unit in New Orleans for a week that usually falls during Mardi Gras, he does not regret owning a timeshare, even if he’s never stayed at his home resort.

I’ve looked pretty closely at several of these programs, and I’ve come to understand that you can get a lot of value for your money under the right conditions, assuming you acquire your week or points on the secondary market for very little money down.

If you understand the ins and outs of the program and how to exchange your points or weeks to stay at different resorts at different times, you can make out pretty well. It helps to have lots of vacation time, flexibility in when and where you’re willing to go, a preference for off-season and shoulder season travel, and the ability to plan trips out far in advance.

Dr. Fawcett gives a more exhaustive rundown of who is a good candidate for timeshare ownership and who is not in his brand spanking new book, A Guide to Loving Your Timeshare: How to Get the Most for Your Money in Family Fun and Experiences.

He was kind enough to send me a digital copy in advance, and now that it’s available for all, you can get your for just 99 cents for a limited time. If you prefer to read a physical book, it’s launching at just $9.95. If you’ve ever considered a timeshare and want to learn how to get the most bang for your buck, this book will pay for itself hundreds of times over.

To give you an example, the author has spent 8 weeks at what he considers 5-star resorts in the past year, and the weeks have cost him an average of $311 apiece. I’ll be seeing the good doctor later this week at FinCon, where I’ll be paying nearly triple that price for less than half a week at the conference of hotel.

Meanwhile, Cory will be a short Uber ride away at a timeshare resort that costs very little to rent in the off season that is September in Orlando.

Site sponsor DLP Capital recently announced a number of new initiatives that current and potential investors may find intriguing. They’ve got over $1 Billion in acquisitions under contract, and they’re incentivizing investors with enticing fee reductions.

Also, the minimum investment has been lowered from $500,000 to $200,000. As a Physician on FIRE reader, you already had that lower minimum, but it has been extended to all through the end of October. If you’ve got more to invest, here are the incentives for the month of September.

➔For a $500,000cinvestment in the the DLP Housing fund you receive 2 FreeAdmissions to our Puerto Rico event.

For all the details on their mission, recent results, and current offerings, view the slides from their most recent presentation here. 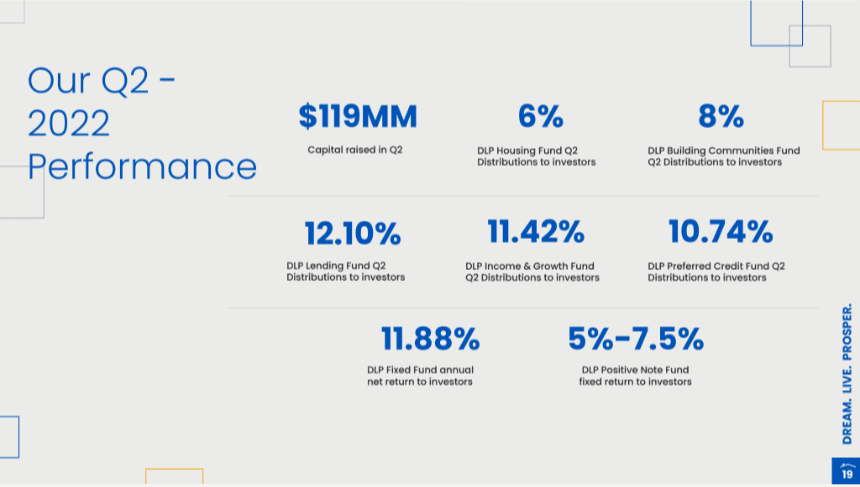 DLP’s next Capital Dinner Capital Dinner and update will be hosted at the Dunwoody Country Club in Atlanta on September 21, and a virtual option will be available as well. Register for in-person or virtual here.

If you’re a blogger or podcaster or Youtuber or whatever, and you happen to be joining the party at FinCon this week, be sure to look me up!

I’ll be around from the start of the conference until early Saturday morning; I’ve got to catch a flight bright and early to make it to the stadium for an 11 a.m. kickoff for my Golden Gophers in Minneapolis. The first game was a lot of fun, and I hope to see more of the same next weekend in this soft portion of the non-conference schedule.

Back to the conference — I’m looking forward to seeing a bunch of old friends (this is my 7th year blogging), making new friends, and attending FinCon in person for the first time in three years and the fourth time overall. Two years ago, the meetup was canceled due to the pandemic, and I canceled my FinCon trip last year for the same reason. I wish the new BA.5 booster shot was made available a few days earlier this month, but what can you do?