I had a great chat with Joe and Denis on the Retirement Wisdom podcast. At 1.5x speed, you can take in How to Retire Early and Live Your Life Fully – Leif Dahleen in just over 20 minutes. Have a listen!

I’m now the only member of the WCI Network without a podcast, and I don’t expect that to change anytime soon. It’s much easier to be a guest than the guy in charge. Passive Income MD introduces The Passive Income MD Podcast!

How much is the average American saving each year? What are they saving for (retirement is not #1!)?  The Fioneers dig into the numbers. Saving Money: Run Your Own Race. Coincidentally, I ran a half-marathon with 23,000 others this morning. I would have rather run my own race. That’s a lot of people to run with!

How many Americans are invested in the stock market in some way, shape, or form? Not nearly as many as I would have guessed. Nearly half of our nation failed to benefit from last year’s 30% rise. Wallet Hacks explores this and more intriguing statistics. Who Owns Stock in America? The Answer May Surprise You. Those clickbait titles get me every time!

“In two years a machine will be doing my job,” a quote from 1959. How about this one from 1890? “The rich have grown richer and the poor have grown poorer… this problem must be solved or there will come a cataclysm which will destroy modern society.” Full Time Finance hits 88 mph in the Delorean in This Time It’s Different. Is it, though?

My 0.5 year quitiversary came and went this week, and I didn’t even notice. I guess it was Wednesday. ESI Money doesn’t miss the half-year celebrations, though. How’s the early retired life in Colorado? Retirement Update: 3.5 Years.

I do know that charitable giving plays a prominent role in ESI Money‘s life these days. His readers are also finding ways to give back. How ESI Money Readers are Giving and Volunteering.

Generosity can help an early retiree deal with any guilt from leaving the workforce early. I’ve donated over $220,000 from this website, for example. People will say you owe something to society, your spouse, and try to take you down in other ways. The White Coat Investor and I respond to these allegations in Dealing With the Guilt of Early Retirement.

Maybe your normal, busy working life is leaving you guilt-laden as your children grow up way too fast. Joe & Kristen of Play Louder did a hard reset at the same age I did. From L.A. to Austin to Florida, they left behind lucrative careers for a new adventure. In a guest post at Making Sense of Cents, they share The Ups and Downs of Reinventing Your Life At 43 With Kids.

Physicians and pharmacists, Register with Incrowd before 2021 ends to qualify for 1 of 2 $150 Amazon gift cards to be awarded to new registrants referred by Physician on FIRE in December.

You'll also get the opportunity to earn money with quick "microsurveys" tailored to your specialty.

If you make good money, but aren’t making much progress towards financial independence, you may be a HENRY, says Kevin of Just Start Investing. Don’t be a HENRY. High Earner Not Rich Yet – How to Avoid Becoming a HENRY.

Trust me, you’ll that money later on. Max from Max Out of Pocket ties together some of our biggest dreams and fears in The 4% Rule, HSAs, and Healthcare Costs in Retirement.

Wash your hands often. Don’t touch your face. The Great Wall will have to wait for a later date. What else should you be doing to stay healthy? Do you know what the stock markets have performed during previous viral epidemics or pandemics? Cut the Crap Investing digs into the data and offers some advice. How to Prepare Your Portfolio for the Coronavirus Outbreak.

We’re slated to take a slow boat to Shanghai this fall. We’ve got more than eight months before setting sail, and I’ll be keeping an eye on the evolving situation. Last fall, we took the family to Mexico for two months, and it was everything we hoped it would be. Slow Travel in Mexico: A Family FIRE Adventure, Part II. If you missed Part I, find it here.

David Baughier has made the companion workbook to his Financial Independence resource website absolutely free. 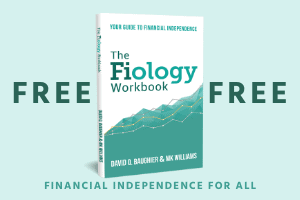 Fiology has now compiled top articles to help you learn all you need to know about 53 individual topics related to all things FIRE. That’s enough for one lesson per week with a bonus lesson, and he’s conveniently set up an email subscription that will deliver one lesson per week.

You can jump right in and view all of the lessons right here right now.

If you would like the companion workbook, subscribe to the email list and you’ll have a chance to download it on the web page you’re sent to, as well as in the first email, Lesson 0.

You can always purchase your own paperback copy of The Fiology Workbook here. But I’d take a free digital copy any day!

Fun fact: David is the identical twin brother of Camp FI founder Stephen Baughier. I met them at the same time in the same place and confused them for one another all weekend long!

I might as well have called them Daven or Stevid as I had no idea which one I was talking to until someone told me to look at their shoes. Then, they probably switched shoes.

I took the last week off completely from running to give my legs and joints a chance to rest and heal up after a pretty intense training regimen to get my wife and I ready for today’s race. Some right knee pain I had went away, but I developed some new left foot pain after a run last weekend.

The good news: I finished the race! I was about a minute off my training half marathon time from two weeks ago. I felt like Muhammad Ali out there, bobbing and weaving through people, and resisting to urge to throw punches to save some energy for the later rounds.

I must say the organizers did a good job to get 23,000 people through the course in a reasonable time, though. There was a lot of energy all around. People cheering us on, bands playing along the route, and my kids hollering for me as I passed the 5k mark and again near the finish line.

The not-so-good news: I’m pretty much non-weight-bearing on my left foot now. To say that I’m walking with a gangsta lean would be a gross understatement. Those lovely endorphins got me through the race, but within five minutes of finishing, I could barely put any weight on it, especially on the ball of my foot.

Looking at some Netter drawings, I’m self-diagnosing it (like any bad doctor would) as a 4th metatarsal or cuboid bone issue. I don’t want to use the F-word; I’m hoping it’s not something that rhymes with dress rapture. It’s tender to the touch, there’s a small purplish discoloration over it, and it hurts like hell when I try to amble down the hall.

My wife’s aunt, a school nurse, is with us for the week. She’s already hooked me up with Ice, Elevation, and she tolerates my Complaining. Thanks, Shell! Can you get me a beer, by any chance?

Congratulations to my wife, who also finished the race — the first offical half marathon for both of us. Way to go, love!

Here’s my official time. I’m very happy with the way it went, especially considering the congestion along the route and the bum foot. 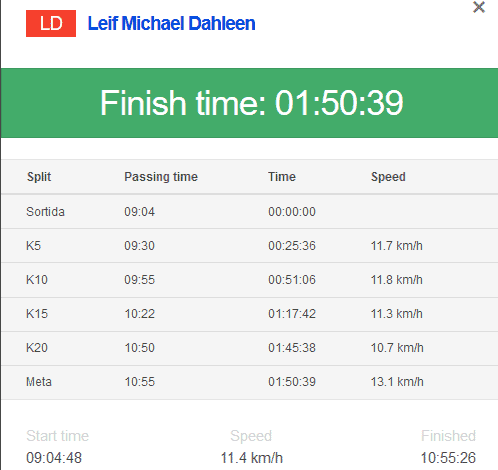 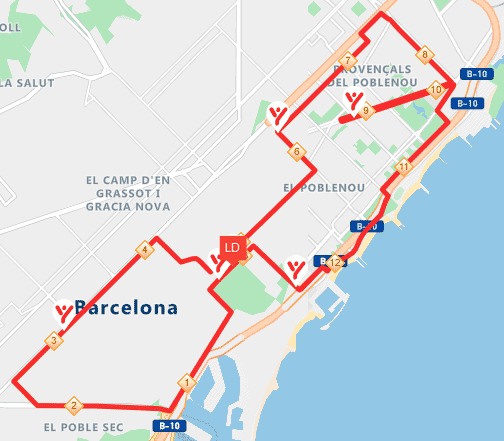 I’ve got about 14 weeks to heal up before I’m scheduled to run another half marathon in northern Michigan. Plenty of time to heal up, but I’ve got a lot of sightseeing I’d like to do here yet in Barcelona and Madrid, so I hope this foot thing gets better sooner than later. Wish me luck!