FatFIRE was the topic of discussion when I was hanging out with Doc G, Paul David Thompson, Mrs. Frugalwoods, and the Millionaires Unveiled on the What’s Up Next Podcast. Should You Pursue FatFIRE?

The good Doc Green of DiverseFI wrote a companion piece of sorts as he attempted to define what fatFIRE meant to him. FatFIRE is a State of Mind.

Does this topic intrigue you? We’ve got multiple discussions going on every day in the fatFIRE Facebook group, which is now over 6,100 strong. There are no prerequisites to join other than an interest in a less-frugal style of financial independence; join us!

The non-frugal Friday thread in the fatFIRE group is always popular. My Money Wizard might cringe at the pics and comments, though. How to Build Wealth and Happiness by Killing the Myth of Status Symbols.

The Financial Mechanic is definitely not into status symbols. Why We Plan to Downsize from 1,000 Sq Ft. Interestingly, my only dwelling at the moment is about 700 sq ft.

One reason to downsize is to make FIRE more easily achievable. The Physician Philosopher doesn’t think that should be the goal, though. Choose FI Over FIRE.

You don’t have to do everything right to retire as a multimillionaire in your early fifties. You don’t have to be a doctor, either. ESI Money shares the Top 10 Money Mistakes I Made on the Way to FIRE.

Learn to invest in a lower-tax manner and you’ll have fewer mistakes to lament. From Money With a Purpose comes a great overview of Tax-Efficient Investments.

The White Coat Investor details tax-efficient retirement account strategies with numerous examples to help you decide between traditional and Roth contributions. Roth versus Tax-Deferred: The Critical Concept of Filling the Brackets.

Is it more important to fill your brackets correctly or fill your days correctly? Read about the struggles of the young Dr. T from Reflections of a Millennial Doctor. I think T stands for Troubled in What Do You Do for a Living?

What do you find more difficult? Discipline with money or discipline with physical fitness? I think they’re related, but I’ve done a better job of building up my dollars than my deltoids. Ben Carson of A Wealth of Common Sense poses the question: Which is Harder to Follow: Fitness Advice or Financial Advice?

He’s almost two years into his quest to attain FI in his first decade out of anesthesia residency. How’s his progress? Ether to FI: Waste Not Want Not & a Net Worth Update.

I hosted a whopper of a guest post from the FI Physician exploring how to best make your money last when faced with lousy investment returns to kick off your retirement. Buffer Assets, Bucket Plans, and Sequence of Return Risk.

The White Coat Investor isn’t running for public office (not yet, anyway), but he’s got some great ideas on how to reform our retirement savings system. 10 Reforms That Would Improve Our Retirement System

Now that the Physicians on FIRE Facebook group is over 13,000 strong, there are numerous locales with dozens or hundreds of physicians in the same geographic area.

Based on the success I’ve seen with other local groups — the ChooseFI groups come to mind — I’ve begun to create local groups for members of the main group to better connect with like-minded physicians close to them.

These groups are a great place to ask questions that are more specific to a city or region and to organize local meetups.

If you are a physician (MD, DO) and have a Facebook account, I encourage you to join in on the conversations. You must first be a member of the main Physicians on FIRE group, where we verify your status as a physician, and then you will be automatically approved for a local group you request to join.

I started by creating groups for the 20 or so metro areas with the most members and a few more that were requested. I’ll probably add another 20 or 30 in the coming weeks as the requests come in and I find time to create the groups.

Here are the groups we’ve got thus far:

Apologies to the non-physician followers. I do have a group for you; it’s called fatFIRE. When that group grows to at least 10,000, I’ll consider adding local groups there, too. We’re at about 6,100, so it’s just a matter of time.

If you follow me on Instagram, you know I’ve had a lazy few weeks leading up to the summer solstice. There’s been plenty of time to bike and jog on the rails-to-trails, sleep in, and perform quality control at the local brewery.

In the next two weeks, I’ll be putting in four days at our surgery center and 192 hours at our hospital. Technically, some of those hospital hours are “home call,” but having sold our home, I’ll be living in the hospital call room, anyway.

For those of you who would rather not DIY your investments, I maintain a short list of recommended financial advisors. Among the good guys and gals who work frequently with physicians, only the lowest cost, fee-only fiduciary advisors were invited to be on this short list. Among them is Shearwater Capital.

As you’ll see below, Shearwater’s fees drop rapidly and precipitously as your net worth grows. That’s a rare AUM model I can stand behind. Additionally, the group is physician-led. They know what we’ve been through as they’ve been through it, too. 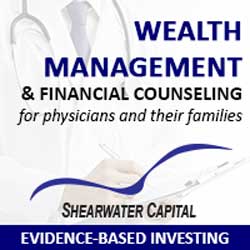 Shearwater Capital was founded in 1999 by two physicians, Dr. Jeff Brown and Dr. Eric Malden, who were MBA classmates and faculty members at the Washington University School of Medicine.

Our vision is to provide an evidence-based approach to wealth management to physicians with an emphasis on tax-efficiency and low costs. We have 20 years of experience in helping physicians save for retirement and manage their financial assets. This provides us with a unique ability to help our clients develop sound financial plans, invest wisely, and attain financial security. At Shearwater Capital, your financial success is our only priority.

Compensation is based solely on assets under management: