A year ago, I had the pleasure of meeting up with Nii Darko, MD, a trauma surgeon and podcaster @ Docs Outside The Box. A couple months ago, we recorded a conversation, and you can listen in here: 028 – Financial Independence with Blogger Physician on FIRE.

The Happy Philosopher performs a case study on a fellow radiologist (not to be confused with a radiology fellow). A Military Doctor Can Retire Early. Should He?

The aftermath of Hurricane Harvey is on many blogger’s minds, including Amy of Life Zemplified. She encourages us to step up in Giving Back Can Help Us All Heal #Donate. *** I will be donating 100% of proceeds from Personal Capital signups for a week as outlined here.

To invest abroad or not to invest abroad. That is the question addressed by Big ERN, Ph.D. of Early Retirement Now in How Useful is International Diversification?

Lowering expenses ain’t easy. Veronika @ Debts to Riches wallows in comparisons in Keeping Up With the Mustachians. That title alone earned her a spot here.

Lowering expenses ain’t easy with Disney. From SightseeMD, The Hidden Costs of a Disney Cruise. An $800 daily cabana rental, what?!?

Perhaps we should focus on happiness instead. Author Jonathan Clements of Humble Dollar does. Jonathan’s Story: Five Takeaways From Happiness Research.

ESI Money has interviewed a bunch of Millionaires since I was featured in Millionaire Interview # 5. I like to share them in batches of five.

ESI Money sent me a tee shirt. Fritz @ Retirement Manifesto sent me one, too. Mr. 1500 sent me some of Vermont’s finest beer, which I shared with my brother and other friends. I appreciate my blogging friends’ generosity, as do my brother and friends.

I’m comfortable in a tee shirt and it’s not every day I get to drink Heady Topper, but my new friends at Fortified Bicycle managed to one-up the bloggers. Somehow, they caught wind of my frequent bike commuting, and they sent me a commuter bike to ride.

What have I, what have I, what have I done to deserve this? Nothing, as far as I know, but I’m reminded of a scene from Swingers in which Trent tells Mikey in the casino “Now the trick is we gotta look like we don’t need this s$*! and they give us the $h!* for free.” I’ve unwittingly followed a similar approach.

My Current Stable of Bikes

Until about a month ago, my stable consisted of three types of bikes.

I have a pair of mountain bikes which are great for biking with friends who visit at some nearby mountain bike trails. I also use one to commute to the hospital. It’s not ideal for commuting, but it gets the job done, as the hospital is a little under a mile away from home.

I also have a road bike, which is well suited to smooth roads and the paved rails to trails bike paths. I also used it occasionally to commute to the surgery center a little over three miles from home. It’s not perfect, since there are a few curbs and rough patches to navigate, but it gets me there.

The third style of bike I have is a vintage single speed Schwinn Predator. It’s my bike of choice when I want to feel twelve again, give my quads an intense workout, sit on hard plastic, or be confused for a high school dropout riding to the corner store for a Monster energy drink. I love the way it looks, but haven’t found many practical uses for it.

Enter the new bike. I didn’t know I needed a commuter bike until I started riding a commuter bike. The model I’ve been cruising around on is the 8-speed version. I like the fact that there’s only one front gear — less bulk and gears to ruin your pant leg compared to the mountain bike or road bike. 21 gears is overkill for getting around town. 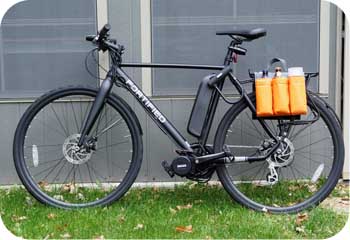 This bike is a great hybrid / compromise between the bikes I was using to commute, and it has made both commutes better. It gets me from point A to point B nearly as quickly as the road bike, but it’s much more rugged and handles curbs, potholes, and sandy or grassy patches with ease.

Mine is also tricked out with a number of accessories. I’ve got front and rear fenders, which came in handy as I rode home the other night in the rain. I’ve got the headlight and taillight combo, which I’ve used before 0600 and after 0100 within the last week. I’ve also got the rear rack, which I’ve learned can easily carry three 4-packs of 16-oz. beers in a grocery bag as long as you have a bungee cord. 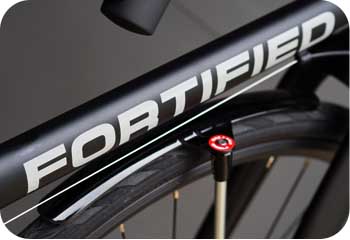 Another cool feature of this slick, matte black machine is the theft-proofing that they’ve done. The seat post and wheels can’t be removed without special tools, and most components are also secured with a modified hex wrench specific to these bikes. If you live in a theft-prone area, you can purchase theft protection for a fee. 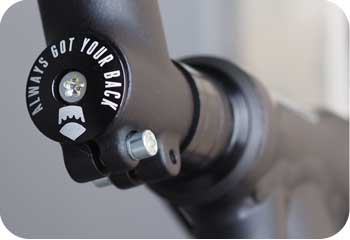 Speaking of purchasing, if you are in the market for a ride like this, the code POFORTIFIED in September will get you 15% off their bikes and gear. Be sure to check out the MMM Special Edition packages — yes, Mr. Money Mustache rides a Fortified bicycle, too. I have no affiliate relationship with Fortified (I won’t be paid a commission), but I’m really hoping they let me keep this black beauty of a bicycle.