I knew that borrowers with federal student loans were benefitting from temporary interest-free loans during the pandemic, but I was quite surprised that some who had chosen variable rate refinancing via private companies are also benefitting from 0% interest or close to it.

In two threads in our physician-only Physicians on FIRE Facebook group, more than a dozen borrowers with refinanced variable rate student loans reported paying under 1% currently.

These great interest rates were not limited to one company; the borrowers had refinanced using five different refinancers.

One thing they all had in common was a variable interest rate and a 0.25% autopay discount. Let’s dig into how these borrowers were able to score such a low interest rate. 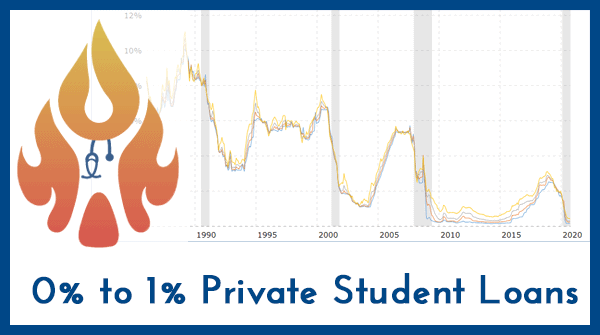 First, I’d like to reiterate that if you’re reading this in 2021, most federal loans are currently at 0% interest until the end of January, 2022. If you’ve not taken out private loans or refinanced at any point, stick with what you’ve got! It’s a great deal for as long as it lasts.

Also, if you are pursuing Public Service Loan Forgiveness (PSLF), you absolutely do not want to refinance your student loans. Doing so would make you ineligible for the program.

When you refinance student loans with most companies, you will be given the option of a fixed rate or variable rate loan.

The difference is what you’d expect from the names and was detailed in a recent post diagnosing debt. When you choose a fixed rate loan, the rate you lock in will remain in place for life.

With a variable rate, the rate will rise and fall in accordance with other interest rates. Most often, your variable rate will be tied to a benchmark based on the LIBOR (London InterBank Offer Rate), usually equal to the one-month LIBOR rate plus a small premium.

Which should you choose? There are a number of factors and some guesswork involved, but there are a few key considerations.

The higher your loan balance, the longer it will take you to pay them off. Owing multiple six-figures would tend to favor a fixed rate. There will be no uncertainty in your interest rate over the entire payback period.

If you have a lower balance that you think you could pay off in five years or less, you might take a chance on a variable rate, which will usually be lower than the fixed rate offer.

The larger the gap between your earnings and your spending, the better able you will be to direct more money toward your student loans if and when you want to focus more on paying them down.

If you expect money to be tight after meeting your retirement savings goals and monthly student loan payment, a fixed rate may be the better option.

Conversely, if you’re easily able to max out your retirement accounts and meet your student loan obligation with money to spare, you would be in a position to pay loans down more quickly if the rate were to rise. This would favor a variable rate scenario.

The higher your savings rate (calculate yours here), the less risky a variable rate refinance would be.

When rates are low, it makes sense to lock them in at a fixed rate, even if you will pay a slightly higher interest rate to do so. Consider the extra interest paid early on as insurance against rising rates that you’d have to contend with if you had gone with a variable rate.

However, when rates are low and expected to stay low, variable may still be an excellent option. We don’t have a crystal ball, but we do have guidance from the Federal Reserve, and they often forecast what they expect to do for the months and years ahead. In September of 2020, Fed Chair Jerome Powell indicated that the benchmark rate would remain close to zero through at least 2023.

Variable Rate Refinancing is Like an Adjustable Rate Mortgage

When I bought my first home with a physician mortgage, I went with a variable 5/1 Adjustable Rate Mortgage (ARM). The rate was locked in for five years and could then change with the prevailing rates annually.

As a variable rate, the interest was lower than it would have been on a fixed mortgage, and I figured after residency, I’d either be selling the place or able to pay off the remaining balance pretty quickly.

That gamble paid off as the five years were up in 2011, and the interest rate on the loan dropped even further for several years until I eventually paid off the balance entirely.

One factor that determines your interest rate is whether you opt for a fixed or variable rate. Another factor is the length of time over which you will be expected to pay the balance in full, the term.

Generally, the shorter the timeframe, the lower your interest rate. Thus, a shorter-term variable refinance will generally get you a low rate, and a longer-term fixed rate will come with a higher interest rate.

As an example, these are the ranges of variable rates offered by Splash Financial in August of 2021. I am publishing these as one example only, and I expect them to be out-of-date before long, so please view our current rate chart for the latest rates (and cash back bonus offers). The current rates for Splash can be found on their Disclaimers page.

Note that Splash reports the Variable rate “Low” with a 0.25% autopay discount and the “High” end of the interest rate range without. On their page, they do not apply the autopay discount when reporting fixed rates at the low end, but I have applied it so that we can compare apples to apples in the table below.

There are some peculiarities in the rate table. I don’t know why anyone would go with the 7-year variable when the 8-year term has a significantly lower interest rate. When looking at the 10-year rate, a fixed rate is actually lower than the variable rate.

It’s important to look at all your options, and preferably from more than one company so that you can compare and contrast. Below, I’ll list each of the companies that readers reported refinancing to a current rate of under 1 percent.

The Role of the LIBOR

When you refinance, you’ll most likely be offered a rate that is based upon the LIBOR. How much extra interest you pay on top of the LIBOR depends on factors based on your profile — your loan balance and credit score, for example, and factors independent of you —  like how high or low the current LIBOR is.

Those with excellent credit who refinanced in the latter part of 2018, all of 2019 and early 2020, when the LIBOR was near or above 2%, were often charged a rate very close to the actual LIBOR. The premium above the LIBOR was quite low, and that premium (or lack therof) above the LIBOR was locked in when they refinanced. The interest rate can and will fluctuate (once per quarter with most lenders) but the additional interest tacked on to the LIBOR will not change.

Now that the LIBOR is back to under 0.25%, companies are, unfortunately, adding on a higher premium to the LIBOR so that they can better cover their operating expenses.

For a look at the current LIBOR and a 30-year history, see this chart at MacroTrends.

As I mentioned in the introduction, more than a dozen physicians reported paying under 1% now. All but two of those who shared their details were under 0.5% and two are paying no interest whatsoever after private refinancing.

What do they have in common? We can assume they have a good credit rating and went with a 5-year variable rate term, as all were offered the lowest rates available from the companies they refinanced with. They are also benefitting from an autopay discount of 0.25%, which is common.

Each of them reported refinancing sometime from 2018 to March of 2020. Surprisingly, they refinanced with five different companies.

One reader had refinance with Splash Financial (offering $500 cash back)  in 2020 and reported a current interest rate of 0.36%. One slick benefit of checking your rate with Splash is the fact that they offer a low-rate guarantee (see details). If you check with them and refinance with someone else (using the same loan data), they’ll hook you up with a $250 Amazon gift certificate.

Five readers, including the two with 0% interest rates, had refinanced with SoFi (offering $500 cash back). One physician with 0 interest had three discounts — one for autopay, one for his excellent credit score, and a member discount for having cosigned a loan previously.

The three that were paying interest on their loans reported rates of 0.15% to 0.40%.

One reader who refinance with Laurel Road (offering $300 cash back) reported a current interest rate of just 0.08%. Another reader whose rate was a flat 2% had that as a fixed rate for the duration of the loan.

Finally, one reader had refinanced with Figure (no cash back currently) reported a rate of 0.42%, having refinanced in March of 2020 with an initial rate of 1.92%.

Refinancing today will not get you a rate under 1%, but many of our refinancing partners are offering a rate of under 2% as the best variable interest rate. The following table is updated frequently and can be considered current.

I’ll say it one more time because it’s so important. If you are going for PSLF and/or have federal loans currently at 0%, keep doing what you’re doing. Refinancing could cost you dearly.

On the other hand, if you have private loans and/or previously refinanced loans and are paying 3% or more, it’s absolutely worth a look at refinancing.

If your balance isn’t huge, could be paid off in about five years, and your credit score is solid, you could very well score a rate under 2%. You’ll also be eligible for up to $750 in cash back and there are typically no closing costs when you refinance student loans (unlike your mortgage).

I don’t expect that you’ll have the luck that others have had with rates floating down close to zero, but policymakers worldwide have suggested that you’re likely to continue to enjoy historically low interest rates for at least the next few years.

What’s your current interest rate on your student loans? Do you know others with private loans paying close to zero? Let us know below!