I don’t make the rules. I just try to play by them. And the rules tend to favor those who have wealth rather than those who are working hard to obtain it.

We’ve seen how an early retiree can pay no income tax, even with a multimillion dollar portfolio funding their post-work lifestyle. It’s how much you have; it’s how much taxable income you have, and that can be minimized in any number of ways.

Dr. Jim Dahle is here to describe a number of ways in which the rich pay less in taxes than those of us with ordinary W-2 income. Not all hope is lost for the wage-earner, though. There are plenty of ways ordinary folks can keep their taxes down, as well. 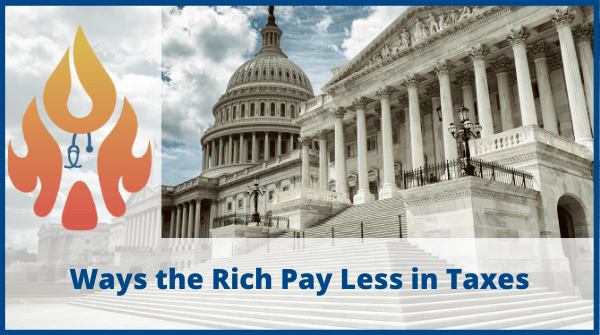 “How’d you like that clickbaity title? I’m very proud of that one. Hopefully, this post goes super-viral because of it.” – Dr. Jim Dahle

The title is actually an accurate summary of this post, however. I hear statements all the time, usually on social media, such as the following:

It’s time for the rich to pay their fair share. #TaxTheRichhttps://t.co/0wuTQ1Mb05

It has become politically expedite to blame our nation’s budget issues on the rich; surely Jeff Bezos could give up a few billion and still be awfully wealthy, right? However, oftentimes efforts to tax the ultra-wealthy end up hurting those who may not consider themselves affluent such as Physicians and small business owners.

To hedge against raising tax rates, it can make sense to take a few plays from the ultra-wealthy playbook. Here are the top tricks the rich use to pay less in taxes.

7 Tricks to Pay Less in Taxes like the Rich

Buildings and equipment go down in value over time. In recognition of this fact, the IRS lets owners of these sorts of business assets take a deduction each year equal to an estimate of how much the asset went down in value that year. That seems reasonable, right? Structured properly, some real estate deals allow for more depreciation than the property even generates in income, basically sheltering all of the property’s income from taxation.

Since rental income isn’t earned income, it isn’t subject to payroll taxes either. Upon learning about this tax break, some newbie real estate investors get a little too enthusiastic and feel like they’re getting some massive free lunch. They really aren’t because the building really is depreciating. That’s why every few years you have to put a new roof on it or a new water heater in it, and eventually, the thing is bulldozed to make room for something new. But there is a little free lunch there.

So for high earners, depreciation recapture does provide a genuine tax benefit. Not only do you get to delay paying the taxes (there’s a small amount of value there available to anyone), but when you pay them, you pay them at a lower rate (a moderate amount of value there). Appreciation is also taxed at long-term capital gains rates, but we’ll get into that more in the next section.

So, is this tax break only available to the rich? No. Anyone can do it, although it is more beneficial to high earners. There are two real estate investing benefits only available to low earners that kind of makeup for it, though.

Sometimes on social media, you run into people who are, frankly, communists. There’s a reason communism didn’t work, of course. It’s not that capitalism is all rainbows and unicorns either. It’s the worst economic system out there except for everything else we’ve tried so far. In capitalism, you put your money (capital) to work for you. Then you get paid for what your labor earns AND for what your capital earns. This is paid to you in interest, dividends, and appreciation of your assets.

Through its elected representatives, our society has decided to encourage the long-term investment of capital, offering lower tax rates on qualified dividends and long-term capital gains (i.e., invested income) than on earned income.

In addition to encouraging investment, this policy also acknowledges that we pay capital gains tax on nominal gains—inflation is often a large chunk of that long-term capital gain. It really isn’t fair to have to pay taxes on something that didn’t actually increase in value. Interest, ordinary dividends, and short-term capital gains are, of course, taxed at ordinary income tax rates. In addition to the lower tax brackets available to long-term investors, you also don’t have to pay payroll taxes (Social Security and Medicare) on unearned income.

So, is this tax break available only to the rich? No way. In fact, high earners pay up to 23.8% on long-term capital gains and dividend income. Low earners pay $0. You, too, can dodge taxes like the 1%!

Another tax-saving tactic occasionally employed by the wealthy is to borrow money instead of earning it or getting it from selling assets. The problem with this tactic is that it usually involves paying interest. If the interest paid is much less than the tax cost, it can make sense. Examples of this tactic include borrowing against cash value life insurance policies, borrowing against real estate, or borrowing against an investment portfolio (i.e., a margin loan).

Is this tax break available only to the rich? No. Anyone can borrow tax-free at any time. Now the wealthy likely have more assets they can borrow against and are likely to be offered better terms on the loan, but the tactic is available. Borrowed money spends just like any other money, of course, as most of us learned in medical school.

However, if you’re delaying tax payment, it probably isn’t worth all the interest you’ll pay. But if you can reduce or eliminate the amount paid by delaying the tax, it may be worth it. For example, if you’re going to be in a lower tax bracket later, it can make sense to borrow against an asset instead of selling it. If you can delay until the day you die and take advantage of the step-up in basis, then it can really make sense.

The wealthy often sock money away into tax-protected accounts like Roth IRAs, 401(k)s/profit-sharing plans, defined benefit/cash balance plans, 529s, and health savings accounts. They can even, in effect, move money from a non-qualified/taxable investing account into a tax-protected account through the Roth conversion process (taxable plus tax-deferred = tax-free). Inside these tax-protected accounts, their money grows faster and is often protected from creditors.

As you are probably going to guess, this tax break is also available to low earners. In fact, a certain amount of earned income is required to make retirement account contributions. You can’t use them if you don’t do any work at all.

Low earners are actually much more likely to be able to put ALL of their retirement savings inside tax-protected accounts (rather than a non-qualified, taxable account) and don’t have to hassle with the traditional IRA income deduction limit and the Roth IRA income contribution limit.

Wealthy people are much more likely to own businesses than the poor. Businesses generate wealth. Not only do they produce income, but if managed well, they become more valuable over time. A business can deduct all of its legitimate expenses and depreciate its equipment and property. When you own a business you can hire others. Since employees, on average, are not paid what they are worth, at least in the long-term (or the firm would go bankrupt), the business owner benefits from their labor as well.

Is this tax break available only to the rich? No. In fact, lower earners using this tactic may save a much higher percentage of their income. A higher earner will only save the 2.9% Medicare tax, but a lower earner may save 12.4% in Social Security tax AND 2.9% in Medicare tax.

Another tax break the rich take advantage of is to split their income into salary and distributions. By forming an LLC or a corporation and making an S election, the business is taxed as an “S Corp.” The portion of the business’s income determined to be distributed is not subject to payroll taxes like Social Security and Medicare.

Is this tax break available only to the rich? No. In fact, lower earners using this tactic may save a much higher percentage of their income. A higher earner will only save the 2.9% Medicare tax, but a lower earner may save 12.4% in Social Security tax AND 2.9% in Medicare tax.

Carried interest is the share of the profits of an investment paid to its managers. For example, a typical deal might be set up that the investors get an 8% preferred return and then any profits above split 80/20 with the managers. That 20% of profits paid to managers have traditionally been taxed at long-term capital gains (LTCG) rates, even if paid out every year from a hedge, private equity, or real estate fund.

The origin of this tax break is actually a fascinating bit of historical trivia—Sea captains were paid 20% of profits after a successful voyage. It was carried into oil and gas exploration ventures at the beginning of the 20th century and around the turn of the century into the blossoming hedge fund industry.

The carried interest tax break has been the target of a great deal of criticism from both sides of the political aisle for years, and so it was no surprise to see the 2018 Tax Cuts and Jobs Act limit it somewhat. To qualify for the lower LTCG rate on these profits, the assets must now have been held for at least three years (rather than the usual one-year hurdle the typical investor faces). It is likely only a matter of time before this tax break is eliminated. However, the private equity and hedge fund industries are among the biggest political donors on both sides of the aisle.

Is this tax break available only to the rich? It’s worse than that. It’s only available to the rich in the financial services industry. Although the door is wide open to you if you would like to start a hedge fund, the reality is that very few people with less than a seven-figure income will ever benefit from this tax break. Being able to use six out of seven of the “tax breaks of the rich” isn’t too bad, though.

The Chase Sapphire Preferred is an excellent first (or only) rewards card. New 8/2021 is a $50 annual hotel credit for bookings via the Chase UR tavel portal & 5x points for all travel via the portal. 3x points on dining, 2x on other travel. Flexible rewards good for cash, travel, or transfer to travel partners, great travel protection & new Peloton, Lyft & DoorDash perks! $95 Annual Fee

What do you think? Which of the seven tax breaks of the rich have you implemented in your life? What plans do you have to implement some of the others? Comment below!