Today, we’ll add another chapter to the saga of the 4 Physicians. We’ve already explored the benefits of Dr. Anderson continuing to work beyond attaining FI. In today’s remix, we’ll revisit Dr. A and see how things might pan out if she were to work part-time.

To recap, Dr. A was relatively frugal when compared to her colleagues, spending $80,000 a year on a $300,000 household income, which gave her a gross savings rate of nearly 50 percent.

Content to drive her Honda, live in a nice if not extraordinary home, and send her children to well regarded public schools, Dr. A thought perhaps she was putting in too much time at work. Working 50 to 60 hours a week for about 10 years was one way for her to become financially independent, but it couldn’t be the only way.

Could she make it happen without sacrificing so much time while her children were young? Could she cut her hours and stave off the physician burnout that was starting to gnaw at her well-being and affecting her more experienced coworkers more noticeably?

The Impact of Part Time Work at Different Times

Let’s take a look at the financial ramifications of Dr. A taking a part-time job with half the pay, while keeping her annual spending constant. Dr. A could go part time from day 1, or decide to go part time after some years of full-time work, let’s say four or eight years.  This gives us four scenarios: 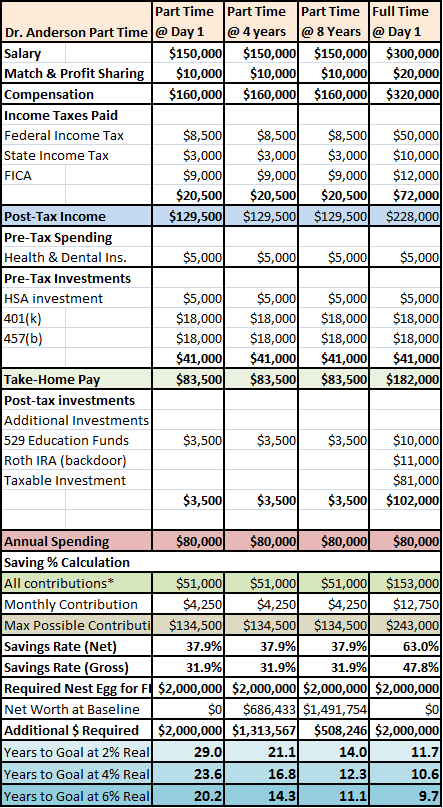 As in other exercises, the assumed real return was 4% real until our Doctor decided to enact change. When Dr. A works part-time from day one, she more than doubles the length of time to FI, as compared to full-time work. She is looking at a 20 to 29 year path to FI with real returns of 2% to 6%.

Allow me to repeat that: working the first 4 years full-time rather than half-time can shorten her working career by six to eight years. And those four years of full-time work come when she is young and used to working harder as a resident. I would take that trade-off 11 times out of 10.

Full Time Work Has Its Advantages

If she works eight years full-time before going part time, she’s already got a $1.5 million dollar nest egg. An additional three to six years of part time work will get her to FI.

Alternatively, two to three years of full time work at that point will get her the same $2 million dollar nest egg required.

As she approaches her FI goal, going part time has a lesser effect. It will delay FI certainly, because she is only contributing 1/3 of what she could when working full time. But the difference is more linear. One year of full time work is roughly equal to two years at half time. Some of the heavy lifting is being done by her $1.5 million portfolio bulit up over the first eight years of her career.

It’s worth noting a couple more differences in the part-time versus full-time scenarios. Note that at part-time pay, Dr. A doesn’t have money left over to contribute to a taxable account or a backdoor Roth IRA. These are investments that are very useful for an early retiree.

Also, she is contributing less to the 529 accounts for her children. In this exercise, we are looking at a $150,000 income as a part-time income.   The math would be identical if we were comparing two different specialties or jobs where the income differential was 2:1, illustrating the financial benefit of a higher paying position / specialty.

The Benefit of a Working Spouse

In the first set of scenarios, we assumed that Dr. A was the sole provider (not to be confused with the Soul Provider

). How might the different scenarios change if her spouse was working full time? 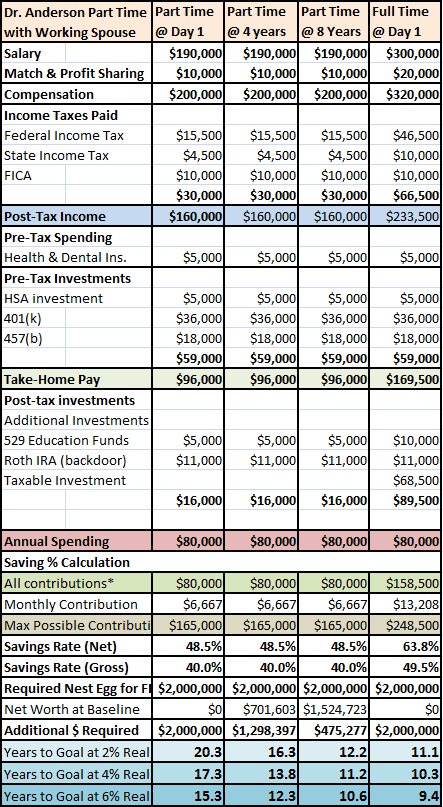 If Dr. A works full time the first four years, they will be FI five around years earlier. The longer she works full time, the less impact each additional year has. Extending her full-time work from 4 to 8 years only shaves off one to four years in this scenario. Not such a great trade-off at this point.

Notable differences from the “sole provider” scenarios stem from the extra $40,000 in salary. The couple is able to fully fund a backdoor Roth IRA and contribute more to the 529s. Also, the 401(k) portion of the nest egg will be double, as each income earner can contribute the $18,000.

What did we learn from this exercise?

[Post-publication update: I have decided to be more like Dr. A, and have now dropped to a part-time position as of October 1, 2017. For details into my decision-making process, and the surprising math behind the tax code that makes it worth my while to work less, see my post entitled So Long, Full Time Employment.]

What did you learn from our analysis of Dr. A today? Do you work part-time, or are you considering it as an option prior to retirement? Commence commenting!

15 thoughts on “4 Physicians Revisited: Dr. A & the Impact of Part-Time Work”