Are you tired of all these rules yet? It’s starting to seem like personal finance and retirement have more rules than kindergarten.

These guidelines can be interesting, though, and this one from Fritz Gilbert comes from someone with a few years of retirement under his belt. Before he retired, he focused intently on the numbers. Dollars and cents occupied his thoughts. Nowadays? Not so much.

I would expect his to be true for many, but it’s a bit surprising coming from someone who regularly writes about retirement and even wrote a book on the topic. Personally, I think I’d spend 90% less time thinking about investing and personal finance if I didn’t have a blog keeping these things at the forefront.

This Friday Feature was originally published on The Retirement Manifesto. 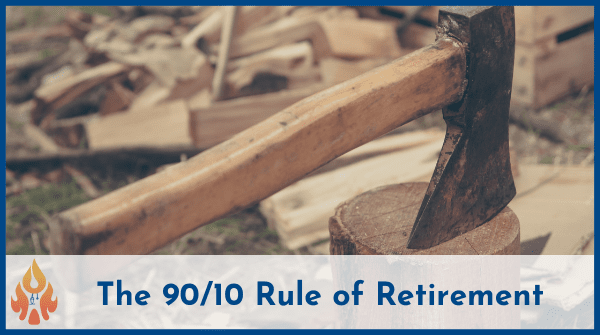 I never thought it would happen to me.

Sure, I’d heard about the phenomenon from folks who had retired before me, but it didn’t seem possible.

Not in my case.

But, I was wrong.  Now 3 years into retirement, I’ve realized those folks were right.  I never thought I’d write these words, but I’ve changed my mind on this mental shift that I’d been warned about.  Until now, there wasn’t a name for it.  Today, I’m changing that.

I’m introducing a new rule.  A name, if you will, for the phenomenon I’ll be discussing in this post:

I had coffee recently with Tom, a long-time reader of this blog.  He’s 2+ years away from crossing his “Starting Line” and wanted to meet me while he was in town on vacation.  We had a great chat, and I’m pleased to report he’s doing all of the right things as he prepares for retirement.

Like many of us do as we’re trying to figure out “When Can I Retire?”, Tom is running “his numbers”, and he’s done some excellent work.  We spent a fair bit of time reviewing his spreadsheets, and it brought back a flood of memories from when I was going through the exact same process in the final years before my retirement. After we got done reviewing his numbers, I told him I thought he’d be in good shape to retire on his targeted timeline.

And then, a thought struck me.

I recalled discussions I’d had with retired folks when I was in Tom’s shoes, and how they told me something that had stuck in my mind.  I later found it to be true in my own life, so I shared it with him:

“When we’re planning for retirement, it’s amazing how much time we spend working through the numbers.  What I’ve found interesting is how little time I spend focused on the numbers now that I’ve retired.”

Tom, knowing that I enjoy metaphors, suggested the time spent analyzing the numbers in pre-retirement is a good example of “sharpening the axe,” where the effort spent “sharpening” on the front end (crunching the numbers) leads to an easier job of chopping down the tree (enjoying a worry-free retirement).  Smart guy.

Bonus points for Tom.  He bought my coffee, he used a metaphor, and he added value to the discussion.

Thanks for stopping by while you were in the area, Tom.  The pic below is for you…

I hearby declare “The 90/10 Rule of Retirement” as follows:

In full transparency, I cannot claim credit for this “rule”.  While I’ve thought a lot about the topic in the three years that I’ve been retired, I had never summarized the phenomenon in words.  That honor goes to my friend, Kevin Lyles (AKA “Beach Walker” in Roger Whitney’s Rock Retirement Club).

Recently, I appeared as a guest at the Retirement Coaches Association Conference. In this LinkedIn post promoting the conference, Kevin left the following comment: 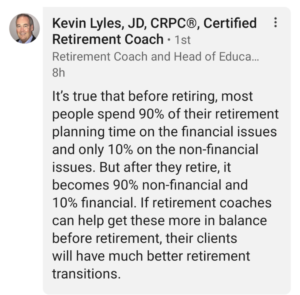 For history’s sake, I’m hereby claiming that the posting by Kevin was the first public declaration of the 90/10 Rule of Retirement.  Congratulations, Kevin.  You’ve once again proven your wisdom, and I value your friendship.

The Implications of the 90/10 Rule of Retirement

Rather, the point of the 90/10 Rule of Retirement is to make soon-to-be retirees aware of a likely shift in their pre- vs. post-retirement focus.  As Kevin said in his comment above, “if retirement coaches can help get these more in balance before retirement, their clients will have much better transitions”.

Maybe for you, it’s 70/30, and it’ll move to 50/50.  Perhaps it’s not a “Rule” at all, but rather a guideline to emphasize the reality of a phenomenon that many retirees experience.   And, of course, I realize that many retirees struggle with money throughout retirement, so there’s that.

This concept, then, most likely applies to folks like you, the readers of personal finance blogs who make the effort to plan their financial futures.  Apply it as you wish, but it’s a big mental shift to be aware of as you’re planning for your retirement.

Whatever you want to call it, consider it valuable advice from those who have walked the path before you.  Your perception of, and focus on, “The Numbers” will likely change dramatically after you cross The Starting Line. Recognize it, and try to focus a bit more on the non-financial aspects of your retirement during your planning years.

Perhaps it’ll be helpful to share what I was thinking about when I was in my pre-retirement vs. post-retirement years.  What better way than to take a journey through Every Article I’ve Written, which I’ve stored chronologically so you can jump in and read regardless of where you are on your journey.

If you’ve not yet retired, you’re likely very focused on the numbers.  I know I was.  Looking back, I would consider myself nearly obsessive on the topic.  I enjoyed the process of laying out spreadsheets to determine if my retirement income would cover my expenses.  Playing with different scenarios, spending shocks, bear markets, long-term care, longevity risks, etc.  Fun stuff, actually. Interestingly, I can count on one hand the number of times I’ve opened any of those spreadsheets since I’ve retired.

A good way to demonstrate the pre-retirement thinking of many of you, perhaps, is to lay out my Top 10 posts (based on the number of views).  “The Numbers” are clearly a topic of interest, which makes sense given that many of my readers “find” me when they’re starting to plan for retirement:

If you scroll through my archives for all of the articles I’ve written since my June 2018 retirement, you’ll find a significant shift in focus, which reflects the reality that I’m now thinking more about the non-financial aspects of retirement.

Looking through the history of my mind as captured in my writing, here are the most frequently read non-financial articles since my retirement:

I find it interesting that all of my “Retirement Reality” Series (#1, 5, 6, 7, 9) posts have been among my most popular post-retirement articles.  I didn’t realize that until I compiled the list above for today’s post, but I’m pleased to see that folks are interested in the “reality” of my retirement transition.

Bottom Line:  I’m spending a lot less time looking over “The Numbers” these days, and a lot more time focused on the things that bring true contentment in life.  It shows in my writing, and it’s a reality in my life.

The Key Take-Away of The 90/10 Rule of Retirement

If you remember nothing else from this post, remember this:

To ensure your best possible transition into retirement, find a way to bring a bit more balance into your retirement planning.  Increase your focus on the non-financial aspects of retirement.  It’s been demonstrated that those with the smoothest transition were those who spent the most time thinking about what their life would be in retirement.

Finding a way to focus on the non-financial aspects of retirement has been a major topic of mine in the 3 years since I’ve retired.  Heck, I even wrote a book about it.  Consider this “90/10 Rule of Retirement” my humble attempt to shine a bit of light into the unknown world of retirement for those who haven’t yet experienced it.

If you’re like me (and countless others), you’ll soon realize that a successful retirement is about a lot more than money.  If you do it right, you’ll also find yourself thinking about it a lot less after you cross The Starting Line.

Then, Enjoy Cutting Down The Tree.

Your future self will thank you.

Not yet retired?  Do you think this rule will apply to you?  Why or why not?

Already retired?  Have you experienced the shift in focus I’ve attempted to explain with this 90/10 Rule of Retirement?  What have I left out that those approaching The Starting Line should be aware of?