[PoF: The following is a guest post from The Frugal Vagabond. After I saw his excellent new site, The Earth Awaits, I asked him if he would like to showcase the site while doing some deep digging for me. I am not necessarily interested in retiring abroad, but would like to spend a year with my family in a true Spanish immersion situation.]

Despite the differences in our lives, our professions, and families, PoF and I have a lot in common. We aspire to FIRE, or at least downshift, because we recognize that time is the most precious commodity we have. We’re lateral thinkers who love travel and adventure. We want our children to grow up with a rich set of experiences that includes exposure to other cultures and ways of life.

A few weeks back, PoF issued me a challenge: could I find a place abroad where he and his family could spend a year honing their language skills, living the good life, all on a reasonable budget and meeting a few basic crime and pollution parameters?

Anyone who knows me won’t be surprised to hear that I practically leapt out of my seat and shouted, “Yes! Of course!” My sincere belief is that the world is filled with places that tick all the boxes, if only one has the means to discover them.

Retirees with limited means, families or individuals wanting to live abroad, those aspiring to a very lean early retirement— all of these scenarios played in my mind when I began to develop The Earth Awaits, my tool to build custom budgets based on every individual’s budget, family size, housing needs, and other important factors.

Here are the parameters that PoF asked me to use when hunting for a place to live abroad:

Impossible? Not even close!

I knew that there were some great options out there that would fit the bill— mostly in Spain, but possibly in Mexico and South America, too. Full disclosure: this challenge did force me to up my game and add a primary language filter to the site, so everyone has PoF to thank for that feature! [PoF: You’re welcome, world.]

With the new primary language filter added, I performed a search on The Earth Awaits with the following parameters: 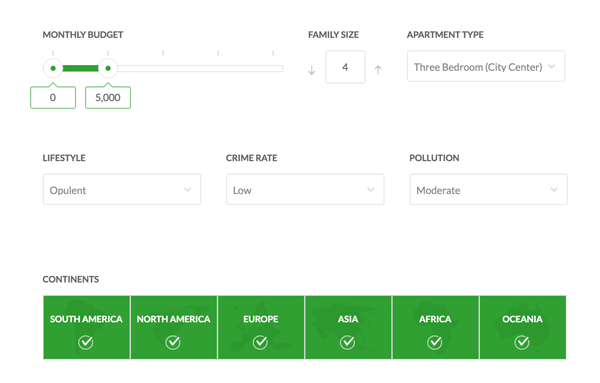 I opted for a city center apartment to minimize the need for a car. Though the PoF family may end up using one, being in the center reduces those costs, improves the availability of services, shopping, and entertainment, and generally would keep the family steeped in culture and activities.

According to PoF’s request, the crime rate is set to low and pollution to moderate, which is average pollution or lower. I chose a lifestyle of opulent, the maximum allowed in the search, to allow for some serious overhead in the budget for things like exploration of the local area, family activities, and to partially account for the costs of school, which we’ll cover later.

In order of Quality of Life index, from high to low, they are:

These results give a great range of costs, geographic location, weather, and lifestyle. Roughly speaking, this list of results can be divided into “Spain” and “everywhere else.”

The Spanish cities have the advantage of being safe, adjacent to other wonderful European destinations, well-developed, and filled with great education options. The cities in Ecuador and Mexico are much less expensive (freeing up funds for private school tuition) and close to home, but there’s a tradeoff in level of development and education opportunities.

Though it’s not the primary aim of this post to discuss all of the possibilities, there are a few destinations here that are extremely interesting.

Córdoba has some of the richest history in all of Spain, having been traded back and forth between pre-Christian, Catholic, and Moorish cultures several times. The old city of Córdoba is the world’s largest urban UNESCO world heritage site. The city is driving distance to the sea, and the budget lies on the upper-middle end of the range, leaving a little bit extra every month to put towards tuition. On the downside, Córdoba has Europe’s highest daily average temperature during the summer. It’s hot!

Sevilla is the capital of Andalusia in southern Spain. It is cosmopolitan, full of things to see and do, and would be an easy place to immerse oneself in language and culture. The tradeoff is that it is among the most expensive locations on the list.

Las Palmas is one of the Canary Islands. That means it comes with all the advantages and disadvantages of living on an island. Limited opportunities for travel, education, and exploration, but great beaches and a more relaxed lifestyle. Because everything must be imported, it is the most expensive city on the list.

Querétaro, Merida, and Playa del Carmen are all expat enclaves in Mexico, making them comparatively safe. Each has a sizable community of English speakers. This might be helpful when feeling homesick, or a hindrance when it comes to truly immersing oneself in the language. Merida has a beautiful old town, Querétaro has incredible geographic diversity (from deserts to rainforests), and Playa del Carmen is an extremely popular tourism beach town. All are inexpensive compared to some of the better options in Spain, leaving plenty of room in the budget.

Cuenca is one of the most notable retirement destinations in South America, and there are plenty of English-speaking expats. Its location in the mountains means it is cool and seldom gets punishingly hot. Ecuador uses the US dollar, eliminating the need for a mental or actual currency conversion. It’s also very, very affordable. However, it’s somewhat remote, and the options for education are more limited than in large cities in Spain.

Ultimately, each of these cities would make a great destination for a year of study and experience abroad. Because of PoF’s specific needs, there’s one item in particular that may weigh more heavily than the others.

The cost of education in each of these cities can vary from almost nothing to extremely expensive, depending on whether the family chooses to opt for public or private education. Schools like the British School of Córdoba and St. George’s of Sevilla can range from 6,000-10,000 Euros per year, per child. There are some private schools that discount a second child, and some which are a comparative bargain, but private education in Spain is bound to account for a huge portion of the budget.

That said, Spanish public school is predictably far better than public schools in the other locations on the list. Assuming the PoF family enters on a visa that allows them to use the public school system, and assuming a certain level of Spanish preparation before the first day of school, the “public option” may be viable.

In Ecuador and Mexico, private education is far less expensive, but also far more necessary. It’s unlikely that the PoF family would want to use the Mexican or Ecuadorian public school systems. In Cuenca, CEDEI, Colegio Santana, and the German School are the most common private institutions used by American expats. Their monthly tuitions are in the low hundreds of dollars per child, rather than nearing a thousand.

Broadly speaking, for the best cultural and lifestyle options, spending the year in Spain is probably the best bet from this list. For the best options that strictly respect the budget while allowing for a quality private education, Ecuador or Mexico may be a better bet.

Of course, it’s not possible to calculate a decision like this on a purely numerical basis. The family’s experience can’t be summarized in a list of pros and cons, or derived into an equation. There’s so much research and reading to do before making a move, but I’m excited about the options available to PoF and his family. With such amazing destinations, it’s really tough to go too wrong.

I can’t wait to see where they decide to go!

[PoF: I can’t either! This adventure is a few years off, so we don’t need to nail down any specifics just yet, but it’s great to know that this resource, The Earth Awaits, will be there when the time comes. By then, I imagine it will be even more robust.

While the query results above gives us plenty of options, there are some places we would consider that didn’t make the cut. Places like Costa Rica, Argentina, and Chile. Tweaking the search parameters to allow for “moderate” crime or pollution would open up quite a few additional possibilies, including those nations I mentioned.

Do I want to live in a place with a moderate crime level? Not particularly, but those statistics are city-wide. Chicago’s got a decent crime rate, but there are many parts of the city where I feel quite comfortable. The same could be said for most medium to large cities around the world.

Would you consider retiring abroad? If not permanently, perhaps for an extended stay? We’re looking at spending one school year abroad while our boys are in middle school. Until then, we’ll continue to practice our español, using Duolingo and other resources.

27 thoughts on “The Earth Awaits: Where in the World is Our Family Going to Go?”