I published this post the day after winning my 12-member fantasy football league in 2016. It wasn’t because I was good (I had a 6-7 regular season record and just snuck in to the 8-team playoff). It was mostly luck, but I did pay attention.

Unfortunately, I didn’t win the following year, so the rollover pot continues to grow.

In the meantime, I’ve continued to win in at investing, collecting market returns with my diversified portfolio while keeping my fees extremely low.

Every fall, armchair managers across the country devote countless hours to studying football players, matchups, injuries, and projections. If these same people would put in half the effort toward their personal finances, they’d all be winners.

You do your homework before the season. You read a few previews, print out some rank lists, and study up on rookies and free agents most likely to make an impact. On draft day, you’ve got everything you need on paper or eleven open tabs in your browser. The beer is cold, the dip is warm, and the chips at the ready — no double dipping. Please. 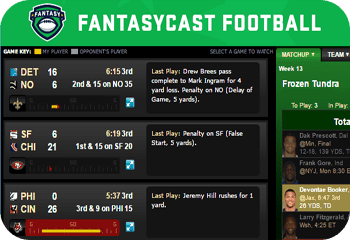 Early in the season, you check the injury reports. You look for the surprise player that went undrafted only to catch 8 balls for over 100 yards and two touchdowns in week one. I’m looking at you, 2012 Kevin Ogletree . Seriously, where you the rest of the season?

Throughout your league’s season, you’re checking the waiver wire, seeing who is being added most in other leagues, and negotiating trades to improve your team as much as possible. You navigate your player’s bye weeks, plugging players in and out of your lineup as if they were Browns quarterbacks.

If you’ve done your job, and your players have done theirs (Why, Cam? Why did I draft you so high?), you will reach your league’s playoffs. With a little luck at the end of the season, you might end up in the money.

On the other hand, if you autodrafted, forgot to set your lineup a few times, and don’t bother much with the waiver wire, the odds of success are stacked against you. Yes, Andrew, that’s probably why you miss the playoffs pretty much every year. Those habits, along with stacking your roster with your favorite team’s players, is really working against you.

I don’t have the data to support this theory, but it would be an interesting survey. I’d be willing to bet that most fantasy football players spend much more time on their fake football teams than their own finances. The game with dozens or hundreds of dollars at stake garners more attention than the other game where millions could be on the line.

Why would I make that bet? I was one of those who spent more time managing my fantasy football team than managing my own money. 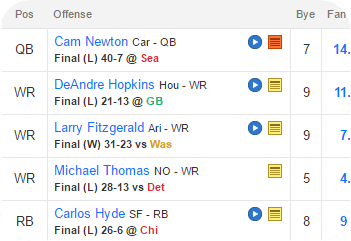 In the first five-plus years of my career, I was good at saving, but I didn’t know much about investing when I started collecting a doctor’s paycheck. I knew enough to stay out of trouble, having read The Only Investment Guide You’ll Ever Need back in medical school. So that was all I needed, right? I mean, Mr. Tobias gave it that title for a reason, No?

I hadn’t read the book in six or seven years. I put my money into target date funds. I didn’t know the difference between a 401(K) or a 457(b). I didn’t start a taxable account until I had been out of residency for four years. I didn’t have an IPS, or even a desired asset allocation. That’s what the target date fund was for. I could have done worse, but I certainly could have done better.

Meanwhile, I was killing it in fantasy football. I won the 12-team league the first year I joined. Call it beginner’s luck, but I put the time in. Throughout the fall, I spent at least a few hours every week devouring statistics and optimizing my lineup. In eight years, I’ve finished in the top four (a.k.a. in the money) half the time. Meanwhile, I paid little attention to my finances early on, other than checking the balances every once in awhile.

Give Equal Time to Both

I won’t try to convince you to give up fantasy football or to spend less time on it. I will insist that you try to spend an equal amount of time on your own finances. So much more depends on it.

When you do your homework before the fantasy draft, read a book like Mr. Tobias’ $11 book, the Bogleheads Guide, or if you’re a doctor, The White Coat Investor.

When you pay your annual league entry fee, analyze the fees on your investments. Most investors who choose not to DIY are paying 1% to 2% or more. Fees can be as damaging to your portfolio as a blown out knee can be to your team.

When you set your ideal lineup, set your preferred asset allocation. By the end of the 15 or 16 weeks, you should have had time to develop a simple but complete Investor Policy Statement.

At playoff time, do some end-of-year tidying up. Is it time to rebalance? Have you maxed out your tax-deferred space? Do you have money ready to contribute to your personal and spousal backdoor Roth IRAs in early January. And please don’t tell me your ability to max these out depends on how well you fare in those playoffs.

Your fantasy football squad will look a little different most weeks. You drop the underperformers, pick up the next big thing, and by the end of the season, your team scarcely resembles the roster you assembled on draft day.

This is exactly what you do not want to do with your finances. Dropping your underperformers will lock in losses. Buying into the next big thing is pure speculation. If you want to play the individual stock picking game, use your “play money,” which should be limited to maybe 5% of your portfolio.

Your roster of investments should look very similar at the end of the year that it did at the beginning. Beat most investors and professionals by selecting a simple three fund portfolio or similar lazy portfolio. Complexity is the enemy in this game.

You don’t have to be a fantasy football player, or fantasy anything aficionado to be guilty of similar distractions. If you’re choosing to trust your money to someone else, or just picking a few funds and setting things on autopilot, you’re deciding something else is more important.

We’re all busy, juggling as much or more than we can handle at times. It’s nice to have a distraction. Hobbies are welcome and required to find a workable balance. I simply suggest you make personal finance one of them. It’s guaranteed to pay dividends.