Gwen was one of the first “FIRE people” I met in person, and back in 2016, she was all about it. She was on a pace to retire in about 10 years from her position with a large corporation in Iowa.

That didn’t happen. She didn’t stay with that employer. She didn’t stay in Iowa. She moved out east and, as of a few days ago, is back in the Midwest, ready to start the next chapter in her  life story.

Since discovering the FIRE movement over a decade ago, she’s come to realize that the fast track to financial independence doesn’t work for her. Will she retire at a relatively young age? My guess is yes, but it will be on her own terms, without any urgency or substantial sacrifice. 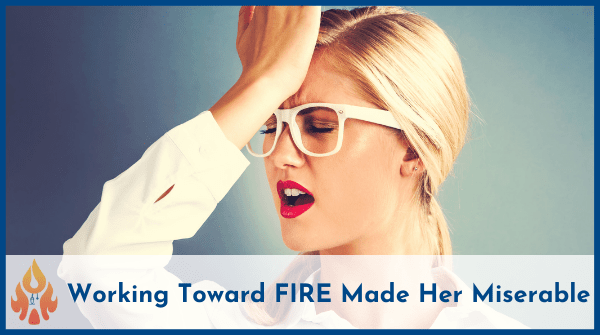 I’ve been on the path to Financial Independence and Early Retirement for close to 10 years now. I don’t remember precisely when I stumbled onto Mr. Money Mustache’s blog but it was somewhere around 2011/2012. As a college kid, there wasn’t much I could do about accumulating assets, but it was incredibly helpful in avoiding debt.

I was listening to the Earn and Invest podcast hosted by my friend, Doc G. This particular episode featured J.L Collins, Jillian Johnsrud, and Brad Barrett and discussed whether the FIRE movement has evolved since it began and hit mainstream.

I think it was Brad that said something like “at the beginning, FIRE was mostly about earning a ton of money to save as much of it as possible to retire as quickly as you could.” As someone who was around the FIRE space then, I can definitely say that was the case. The biggest voices at the time were Mad Fientist, Mr. Money Mustache, and Jacob Lund Fisker. All 3 were earning lots of money, saving lots of money, and retired early.

If they could do it, so could I. I took a lot of inspiration from them at the beginning of my FIRE journey and you can definitely see it in my status reports from 2014–2016 ish. I was feverishly saving as much as I could, optimizing every aspect of my life, and counting down the days until I could retire at the age of 35.

One reason I started my blog 6 years ago (6!?!?!) was because I went looking for someone like me and couldn’t find anyone. They were all married male bloggers in their 30s and I was a single woman in my mid-20’s. They had a lot to teach me, but there was also something missing. I so wish I had had a community like the one Angela from Tread Lightly, Retire Early has created. (Ladies, check out Women’s Personal Finance! It rocks!!)

I think the thing that was missing was the voice of moderation. Yes, you can save 70% of your income, but are you happy? Or are you miserable today just to get to the promise of a happier someday once you save a lot of money?

One of the biggest pivot points in my FIRE journey was talking to Brandon the Mad Fientist. He told me he really regretted saving so much money at the expense of their happiness then. (He goes into way more detail in his podcast episode with Ramit Sethi that I highly recommend listening to.)

At the time, I was miserable. I was working for a big corporation with limited vacation time and an aura of fear about it. They were constantly reorganizing departments, aligning their workforce according to “agile practices”, and trimming benefits. Rumors abounded about the next division to face cuts.

I couldn’t see myself staying there for 40 years and there were no other big companies in the area that paid as well. Yay living in the middle of nowhere. So I saved and saved and saved to position myself better if I did get laid off or downsized.

But I wasn’t happy. I even managed to convince myself that investing in real estate was a good idea.

Narrator: It was not a great idea for me. Sure I was getting paid to live somewhere, but the stress of managing the property was making me so unhappy.

After I sold my property and broke up with my partner at the time, I realized I couldn’t just go back to the working and saving world. I needed to stop hoarding all my money and live a little now while I could. I stopped calculating how much longer I had to work.

I reset my FIRE goal to something a little more realistic for my income level and partnership status. Instead of retiring at 35, maybe 45 or later. I also tried out changing my physical location. While this Midwestern gal learned she didn’t like living in huge cities on the East Coast, she still had a good time and learned a lot of valuable life lessons.

I learned I didn’t hate work. What I needed was a balanced work environment for a company that was doing good in the world that didn’t have this atmosphere of fear woven into their business model. I needed to be appreciated while performing a job that has me doing more work time than sitting around bored time. My current position fits this criteria well. It’s technically a non-profit so there are no shareholders to weigh in on business decisions.

Outside of work, I came to the realization that I like having nice stuff and room for all my nice stuff. I’m not going to go crazy, but I’m going to spend some money on hobbies. I bought a way nicer house than many in the FIRE world would say I need.

Our house might be huge, but it’s under 20% of our budget and we’re not trying to save every dollar. Living in a smaller space might save money, but having to keep my stuff in cardboard boxes makes me stressed out and sad.

Now I am on the path to what some call Coast FI, or Slow FI. I believe Jess from the Fioneers was the first person to coin the term. With $300,000 in assets working for my future in the background, I don’t need to save more funds in retirement accounts to have a comfortable retirement. (I still save about 10% to fully get the match from my employer and cut down on my taxes but I’m nowhere near maxing them out anymore.) I “have” to work until I am 55.

Well, my employer offers both a traditional defined benefit pension plan and allows retirees to stay on the employee health insurance. It would cost so much more money for health care if I left before 55.

If you take my previous employer’s pension plan, this pension, any dredges of Social Security, and all my personal retirement accounts, I’ll be doing well in retirement. I just have to get there, first.

I am 30 years old. I will turn 55 in 25 years. I don’t plan on working a full 9–5, 5 days a week schedule until I retire. My employer offers flexible working schedules — 4 10’s, every other Friday off, etc. I might even try to see if I can drop down to 32 hours if I can keep full benefits.

But, I also have my partner to consider in this. Just because I have to work until 55 doesn’t mean he does, too. His job is great but leadership in the office makes it a tough place to be sometimes. I would love for him to be able to exercise his FU money if it gets to be too much one day.

He’s in software development, so chances are high he’ll be able to get a job with more pay with little effort. Or, he can do a sabbatical and work on developing his own video game. Or, he can be a stay-at-home dad when we have kids.

And I’m even more grateful I was allowed to try all the different lifestyles to find the one that works best for me and my partner.

What will your FIRE journey look like going forward?

15 thoughts on “Working Toward FIRE Made Her Miserable, So She Changed Course”