We’ve explored how the definition of a millionaire hasn’t really changed, but what it means for your wealth and your future most certainly has. Over the 100+ years since the term became popular, the spending power of one million dollars has been greatly diminished.

Jim from Route to Retire, the millionaire early retiree who moved his family to Panama when he retired, knows this very well. He penned today’s Friday Feature, a popular post from a recent Sunday Best. This post originally appeared on Route To Retire. 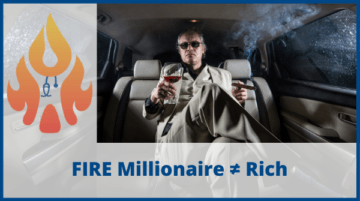 There’s an interesting mentality that I notice creeps up periodically.  It’s the idea that some people think that being a millionaire makes you filthy rich with plenty of money to throw around.

Folks who aren’t as entrenched in the personal finance world tend to think that you actually have $1 million ready to spend if you’re a millionaire.  In other words, if you’ve hit that mark, you must be sitting on bushels of cash, just ready to be spent.

This is probably a common way of thinking if you don’t fully understand how early retirement works.  I know I thought the same thing before we continued to grow our finances.

However, that’s really not true, particularly with those who are LeanFIRE or regular FIRE folks.

In all actuality, many folks in early retirement are running around with the same amount of money to spend as they had when they were still working and saving.  If I wanted to, I could run to the local bank and come up with around $2,500, but that’s about it.  Everything else is tied up elsewhere – and purposefully so.

Before I start this, be aware that this is not about most people in my life.  I’ve only heard this a few times overall, and it doesn’t really bother me – I just find it interesting.

Maybe we’re planning to go somewhere or do something with people we know, and the comment comes up, “Well, you guys are retired – you can afford it.”

Maybe we’ll be out to dinner or just at a bar for some beers, and you hear, “You guys should pay – you’re rich!”

These kinds of remarks are mostly jokes but with an obvious hint of sincerity behind the words.  The suggestion is that clearly, we’re actually rich and just have overflowing wallets.

And the thinking isn’t too foolish.  It’s just some naivety in not understanding the area of money and investing.  Ask me about why we don’t have carburetors in cars anymore, and you’ll likely see my own naivety in that subject.

P.S. What the heck do carburetors do anyway?

A million dollars is a sizable amount of money.  It’s not the “most” money, and having a lot of those millions is certainly better than having one, but it’s still nothing to balk at.

Regardless, once you start having money beyond an emergency fund, you need to start something.  If you stash it under your mattress, it’s going to disappear in one of three ways:

That third one’s actually the most interesting, though, because inflation can hurt you even if you put your money safely in the bank.

So let’s say you save up enough money to live off of and keep it in the bank.  Most banks are paying ridiculous amounts of interest right now (our credit union offers up to 0.15%).  But even online banks like Ally (which I love!) offer rates of less than 2.5%.

Look, the online banks are much better than the rates at local banks and credit unions for sure (actually almost 17 times better in this case!).

But the problem is that these rates aren’t giving you enough return to save your money from inflation.  Cost of goods rise, and at an average inflation rate of 3.10% since 1913, the value of your money sitting in the bank becomes less and less over time.

So what do you do?  When you begin to understand this concept, you start to find other places to put your money.  You look for investments that will at least keep up with the rate of inflation, such as TIPS, but preferably you strive to do even better to get the most bang for every buck.

Put concisely; you need your money to keep making money.

Many of you probably already get this.  You’re putting money into the stock market, real estate, or other investments so your money can grow for you.

It would be great if you could just sit tight on your money and not have to worry about it.  Unfortunately, though, it’s really a situation where you invest it or lose it over time.

And when all’s said and done, the goal is to have your nest egg provide you with enough income to pay for your lifestyle.  Not only that, but it has to last until you die and possibly longer if you have a desire to pass some of your wealth onto any offspring.

Because of that, being a millionaire doesn’t mean that you’re sitting on buckets of cash.  It ends up meaning that you have your money invested and out-of-sight for the most part.

Because we made it to millionaire status a couple of years ago, we should have tons of money at our disposal, right?  Wrong.

The irony is that we’re basically on a fixed income now.  Sure, it’s not a fixed income in that we technically could take out a little more or less from our portfolio every year if needed.

However, if we want to ensure that we have enough money to live off until we die and possibly leave some to our daughter, we literally can’t spend as we please.  As a regular FIRE retiree, we need to spend in the same ballpark as we always have.

The reason for this is that we’ve based our early retirement on the premise that we’re only going to be taking out X number of dollars per year for expenses.  If we take out any more, we could possibly be removing too much principal.  And that would mean less money in the pot that could continue to grow.  Spending more than our allocated amount each year could be throwing our future out the window.

The 4% rule in effect on a million dollars means that you would have about $40,000 per year at your disposal (adjusted annually for inflation) for all your expenses.  That’s great, but that’s not a ton of dough in your pocket.  In fact, the average American household blows through almost $68,000 per year!

If you go by those numbers, a millionaire early retiree household can actually seem poorer than most families in the U.S. overall.

P.S.  They’re not – they’re actually just a little more efficient with how they decide to spend their money!

In other words, it’s really a matter of choices.  And there are no wrong ones if what you do makes you happy and you’re considering your future.  But $40,000 per year is not necessarily the life of the rich and famous.

The idea of “well, you can afford it” isn’t exactly true.  I could probably afford whatever it might be, but only if I wanted to take the chance of needing to go back to work again.  And I definitely don’t want to do that!

Just because your net worth looks good doesn’t mean you have gobs of cash to throw around.  Many people think that your net worth symbolizes how much money you have sitting in your wallet or the bank… it’s not.

Most folks that have started to sock a decent amount of money away know that money is tied up in investment and retirement accounts, real estate, businesses, etc. – not usually in the bank.

People sometimes think – with no ill-will – that we now have money just to blow, but that’s really not the case.  Your net worth is not the same as your available cash.

Your net worth is definitely a crucial number and much more vital than just having a good income.  However, it’s not synonymous with cash on hand, or you could end up in a world of hurt if you spent it as such.

Just a reminder, I’m talking specifically about “lean” and “regular” FIRE folks.  There are a good number of FatFIRE people who very well might have enough money set aside to live out their wildest dreams.  Those are the folks I like to hang out with!

We’re not rich – we have only enough to maintain our current standard of living.  And guess what – I’m absolutely fine with that.  I’m happy that we’re blessed enough to enjoy each day without the necessity of working in an office any longer.

But this millionaire doesn’t consider himself rich by our money alone.  I do, however, feel that we’re rich with the freedom to enjoy every day now as we see fit.

No spam. Unsubscribe at any time.

Do you think being a FIRE millionaire means you’re rich?