The millionaire definition is pretty straightforward. It’s a person who has a million-dollar net worth. Always has been. Always will be.

What does it mean to be a millionaire, though? How can that coveted status elevate your lifestyle, and to what extent?

There was a time when becoming a millionaire meant living a life of extreme luxury. Today, while $1 Million is nothing to sneeze at, achieving that net worth number doesn’t mean it’s time to visit the Rolls Royce dealership, either.

Let’s take a look at what it means to be a millionaire today and how that meaning has evolved over the decades and centuries. 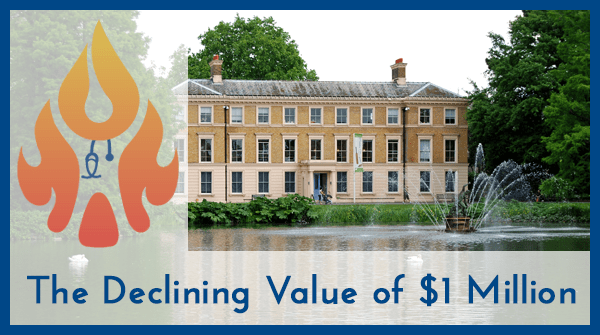 The Millionaire Definition Hasn’t Changed, But Its Meaning Has

What Can You Do With A Million Dollars?

“When most people say they want to be a millionaire, what they really mean is “I want to spend a million dollars,” which is literally the opposite of being a millionaire.” -Morgan Housel

What can you buy with $1 Million dollars in the 2020s if you don’t mind blowing it all? Let’s see.

A million dollars will buy you a McLaren Senna, which I promise you is faster than Tracy Chapman’s Fast Car.

A million dollars gets you a 8,000+ square foot home in parts of Ohio, Alabama, and Texas, among other places.

A million dollars might get you a 900 square foot condo in the outskirts of California’s Bay Area. Maybe.

A million dollars can buy a 50′ to 90′ used yacht. Gas, storage, maintenance, and staff cost extra.

A million dollars will get you 1,086,967 13 oz. bags of Great Value tortilla chips in many Walmart locations. Man, those things are a bargain, or as one could say, a great value.

A Million Dollars in a Retirement Portfolio

Since the goal of having a million dollars is usually not to spend it in a day or a weekend or to overload on processed junk food, but to use it over decades to afford a decent retirement, let’s look at what it’s worth in that regard.

That’s enough for an individual to have a decent middle-class lifestyle in a low-to-moderate cost of living area.

For a family, it could be tight. There are families who live on less — Justin and his family of five routinely spend about $30,000 a year, but my family spends closer to triple that amount.

The average American household spends around $63,000. Attempting to live on that with a million dollar retirement portfolio would require a potentially non-sustainable 6.3% withdrawal rate, and a very real chance of your money not lasting.

Can One Retire When Reaching Millionaire Status?

Based on the millionaire definition of having a net worth of a million dollars, that would imply home equity as a part of that million dollars. Certainly, owning a $600,000 home outright while having a $400,000 investment portfolio would make retirement challenging.

Most or all of the $18,000 to $24,000 safely withdrawn from the portfolio would cover the costs of home ownership including property taxes, utility payments, maintenance, and upgrades.

If you consider someone with a paid off home and a million-dollar portfolio in addition, now you’ve got $30,000 to $40,000 a year to put towards all expenses.

Add a pension (becoming less common these days), Social Security benefits, and perhaps employer-subsidized or government-subsidized healthcare, now retirement as a one-millionaire may be feasible.

It had better be. The median retiree isn’t even one quarter of the way to being a millionaire, according to WalletHacks.

Most high-income professionals I know are pursuing a higher-budget version of retirement, or fatFIRE, if you will. To have a six-figure annual spend, you’ll want to be a multimillionaire, and a retirement goal of $3 Million to $5 Million or more in today’s dollars is a common goal.

The Societal Focus on Millionaires

While a million bucks ain’t what it used to be, that hasn’t stopped our society from having an intense focus on those who’ve achieved that level of net worth.

ESI Money has published written interviews with hundreds of millionaires, including me back in 2017. He now runs a successful membership community for millionaires and those who aspire to join their ranks.

There is no shortage of podcasts that focus on millionaires. The Millionaires Unveiled podcast now has 172 episodes, and I recorded with the show’s hosts for an episode  of the What’s Up Next podcast.

You might get the impression that there are a lot of millionaires out there. You would be correct, you intelligent soul.

Statista reports that there were over 10 million millionaire households in the United States in 2018. Credit Suisse in 2020 calculated the number of individual millionaires in the U.S. to be over 20 million, with the global number near 57 million.

That’s a lot of millionaires, far more than there were a century ago. Inflation has a lot to do with that fact, but the masses have also benefited from better access to and lower costs of investing in assets like stocks, bonds, and real estate.

The History of the Millionaire Definition

The term “millionaire” as defined is credited to the French who used the term to describe speculators who earned millions of livres (precursor to the Franc) investing in the Mississippi Bubble before it burst in the early 18th century.

The term was appearing in literature in the 18th century, and its popularity soared toward the end of the 19th century, roughly tripling in prevalence between 1880 and its peak in 1905 according to Google’s Books Ngram Viewer. 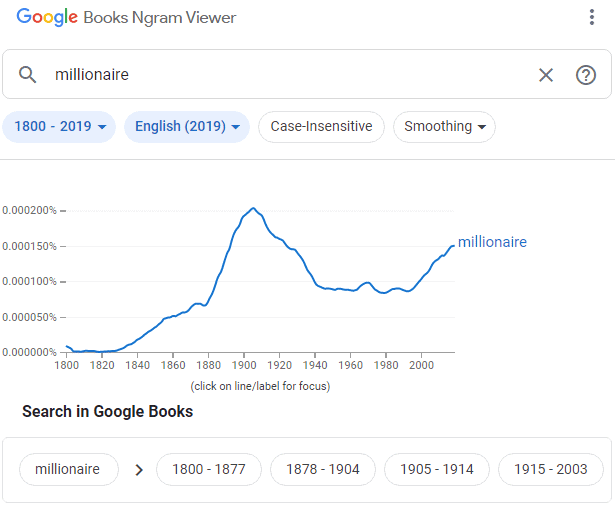 The early 20th century saw oil and railroad barons obtain riches. Names like Rockafeller, Carnegie, and Vanderbilt were well-known for their wealth, and in most cases, philanthropy.

Names like Ford, Baker, and Morgan would soon join their ranks as the automotive and banking industries gained prominence.

George Washington was one of the wealthiest Americans of his time, dying with a net worth in the range of a half-a-million dollars. Adjusted for inflation, that’s the equivalent of over half-a-billion dollars today.

The first American multimillionaire was John Jacob Astor, a German immigrant who made his wealth in the U.S. in the fur and opium trades.

His great-grandson, John Jacob Astor IV, of the Astoria Hotel fame, would later perish as the richest man aboard the Titanic in 1912 at age 47, worth an estimated $87 Million then, or well over $2 Billion in today’s dollars. His pregnant 18-year old wife Madeleine Astor made it to a lifeboat and survived the tragic sinking of the ship.

The public was fascinated with millionaires as they gained prominence back in the day, and it’s no surprise. At the time, it really did mean something special to be worth a million or more.

What it Meant to be a Millionaire

In the early 20th century, there were about 5,000 millionaires in the United States.

Interestingly, $30 Million is now the standard for meeting the definition of an Ultra-High-Net-Worth Individual. 240,000 people have achieved that in the U.S. today, nearly half of the 513,000 worldwide.

When the Great Gatsby was Published

In 1925, F. Scott Fitzgerald published the existential story of the fictional eccentric millionaire Jay Gatsby. The Great Gatsby would go on to sell 25 million copies, and the main character would be played on film by leading men Robert Redford and Leonardo DiCaprio.

America has long been, and continues to be, obsessed with the millionaire lifestyle, or what it used to be, at least.

According to the U.S. Bureau of Labor and Statistics (BLS) inflation calculator, $1 Million in 1925 is worth the equivalent of $15.1 Million today.

How much was Jay Gatsby worth? The book doesn’t say, but Kevin Rose speculated in New York Magazine that his lavish lifestyle would have left him broke.

Conversely, Forbes staff writer Michael Noer have him a net worth in today’s dollars of a cool $1 Billion.

As the world picked up the pieces after years of devastation and couples got busy getting busy to create the Baby Boomer generation, a million dollars still meant a pretty massive net worth.

Due to the Great Depression and the deflation that occurred at the time, there was not much inflation between 1925 and 1946.

According to the same BLS calculator, based on the Consumer Price Index (CPI), $1 Million in 1946 is worth the equivalent of $14.3 Million today.

The year was 1975. The mood ring was invented, Microsoft was founded, The Captain and Tenille topped the charts, and moviegoers flocked to Jaws and One Flew Over the Cuckoo’s nest.

Meanwhile, a stork flew over a rural home in southern Minnesota, dropping off a future anesthesiologist named Leif.

His parents weren’t millionaires, but if they were, they would have been set for life because $1 Million in 1975 is worth the equivalent of $5.0 Million today.

Conan O’Brien was famous for many goofy skits on his late night talk show, but to me the most memorable was a bear that was a little too comfortable in his own fur.

His second most memorable skit was a series of predictions he would make for what life would be like “In the Year 2000.” The skit became more comical as the titular year came and went and the chant remained the same.

The dot com bubble was about to burst, and many newly minted millionaires would learn that millionaire status can be ephemeral.

The year 2000 still sounds to me like something out of the future, even though we’re now 21 years past. What did it mean to be worth a million dollars way back then?

If you look at inflation by year, you’ll see quite an uptick in the 1970s and early 1980s with three consecutive years of double-digit inflation, explaining the rather dramatic drop in the value of $1 Million over the quarter century from 1975 to 2000.

Since then, 12 of 20 years have seen inflation below 2.5% with the range being -0.1% to a high of 3.8%. The buying power of a million dollars has changed in 20+ years, but not all that drastically thanks to relatively low inflation.

Meeting the Definition of a Millionaire Today

According to DQYDJ’s calculator, $1 Million puts you at the 88th percentile in terms of U.S. wealth and the 99th percentile globally, per the Credit Suisse Global Wealth Report.

It’s also true that the ability to call yourself a millionaire no longer carries the cachet that it once did.

The millionaires of the early 20th century were as wealthy as ultra-high-net-worth individuals today. Millionaires in the roaring ’20s or World War II era were worth about half as much in the neighborhood of $15 Million in today’s dollars.

When I was born, a million dollars at the time bought about as much as $5 Million today. That’s a lot of pet rocks!

While it’s certainly possible to retire well with $1 Million, and most people get by with less, it’s becoming more common to have a multimillion dollar goal. If your aim is to live the fatFIRE lifestyle, it’s practically a must.

Do you meet the millionaire definition? Is multimillionaire status in your future? How much is enough for you and your family?

23 thoughts on “The Millionaire Definition Hasn’t Changed, But Its Meaning Has”

The Wells Fargo Active Cash Card simply offers a flat 2% cash back on all purchases No annual fee.