Many newly-wedded couples go out on a honeymoon.

It’s a special vacation, usually after the wedding, that features romance, connection, and, in many cases, letting the world drop away so that the couple can focus on each other.

The non-vacation parts of the honeymoon can last for months or even years after the wedding, as the couple takes special pleasure in being married and being united. After a while, for many couples, the honeymoon dissipates, and being married becomes the new normal, the thing you’re used to. It’s not new and novel anymore.

Can retirement work the same way?

In today’s post, originally from the FiPhysician, we explore this honeymoon phase for early retirees. 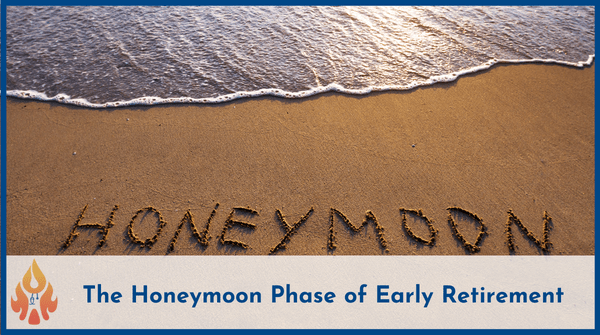 The first several months of early retirement are the honeymoon phase.

While it can be a little different for each early retiree, once you finally “break the chains,” there is a sequence of emotions you go through that mark the first several months as unique.

What is the sequence of emotions you can expect to go through early in early retirement, and how might the honeymoon phase of early retirement be best used as a springboard to continued growth?

It is that day you have thought about for a long time. Retirement Day!

You have been saying goodbye for what seems like forever now.

You have no idea how you will feel the next day. Probably not that much different.

After all, we are a progress- and success-driven lot, always on the next best thing. We are used to transitions as we rotate in med school and residency.

Then you hit your career, and likely at some point, you said, “is this all there is?”

And you retired. We all have different reasons to retire, but all early retirement is the same.

I think the honeymoon phase ended when fear reared its ugly head.

But before we get there, what is the honeymoon phase of early retirement?

What is the Honeymoon Phase of Retirement?

We have an idea of the things we will do when we retire. And you attack those things with gusto!

Me, first, I cleaned out every space in the house and barn. I followed the Pareto principle with my cleaning, so I’ll admit I need to go back through again, but not day after day for weeks on end this time!

So you have an idea of the people you will see and the activities you plan, but after a few months, these activities become routine. Maybe they don’t provide the same happiness you were looking for. Yes, doing laundry for the first time in a few years was fun—a few times. Then, as I was worried, resentment towards your family crept in. But that’s for a different blog.

This is a little different than a honeymoon, where you go away after your wedding for a couple of weeks and then return to real life. Kid, the real life you are returning to is retirement, so the honeymoon is forever!

It is the feeling of honeymoon that fades in early retirement. The excitement, the anticipation is gone. Routines are set. And… what’s next?

More emotions, for sure. Which emotions? That is yours to feel.

What’s Next After the Honeymoon Phase of Early Retirement?

As you can see below, I’m not making up the honeymoon phase of early retirement.

What research is there to support it? None. But that’s not the point.

After the honeymoon phase, you have:

What comes next with the Big Decision Phase? This is all about purpose and maintenance of what brings you joy. I bet purpose underlies all major phases, though Coughlin thinks the honeymoon phase is more about ambiguity in work, family, and your role in retirement. I retired into sequence risk which gave me plenty to think about as far as the money is concerned. But money wasn’t the issue.

After 4 months I figured out that I was suffering from chronic burnout for most of the last 20 years.

So, finally, let’s get back to the emotion one might feel at the end of the honeymoon phase of early retirement.

What Is After the Honeymoon in Retirement?

When the “honeymoon” phase of early retirement is over, people often have feelings of disenchantment and boredom.

That “Is this it?” phase kicks in after a few months. How am I going to spend the next 30-plus years?

This is important and the real issue here: what are you afraid of?

What are you afraid of in early retirement?

No, I’m not talking money now. You retired early; you got the money figured out.

But wait a moment—is it about the money? I think some people sublimate their non-financial retirement issues into financial ones, but that is a pretty easy solution because you either did or did not save enough for retirement. Fortunately, the folks I deal with have oversaved; thus, there is a high risk of non-financial problems spilling over into spreadsheets.

Fear is likely a result of wondering if you have enough. Not enough money. Maybe enough joy? Happiness? Potential fulfillment?

Is that boredom creeping in? No, worse. It is fear!

Fear or some other strong negative emotion. You will be emotional when the honeymoon phase of early retirement ends. You thought you were prepared, and you are, but when you get there, wait—where did this flood of emotions come from?

You did not expect such a response to your new routine life that it would affect you in a flood of emotion. How can you answer the question: is this it?

Here is the answer: pivot. If that doesn’t work: pivot. Keep trying. All you have is time!

Fear and the Honeymoon Phase of Early Retirement

So, you will go through an adjustment phase in early retirement called the honeymoon phase. With it, you have additional emotional baggage to work through. The sort you missed with the high emotions of actual early retirement. You retire, and things go well for a while. Then they don’t. That’s life.

The honeymoon phase is marked by a sign: you feel the surge of unprocessed emotions come back to you. Is this all there is?

How do you adjust to life when it changes? You pivot! You adapt to new circumstances. Early retirement is a time of change. A massive change. Keep digging into what brought you moments of flow in earlier phases of life; keep bringing those back.

As I help other people transition to early retirement, what do I see in them? They are sublimating their non-financial fears in spreadsheets.

What do I see in myself? Luckily I don’t like spreadsheets!

I’ll admit I felt fear during my honeymoon phase of early retirement. It is not about the money. It is about finding fulfillment in the next 40 years of life.

Choose the abundance mindset rather than the scarcity one, and you might find that you need fewer spreadsheets to keep track of your joy.

4 thoughts on “The Honeymoon Phase of Early Retirement”