Why on earth would someone put themselves through twelve years of education and training for a career of only about twelve years?

It’s a great question and one that I had best be prepared to answer again and again. My current job as an anesthesiologist is ending in the summer of 2019, and my time away from clinical medicine will be extended and perhaps permanent.

If I put myself in the position of an outsider looking in at this situation, it doesn’t make a lot of sense. Here’s a guy who saves all this money just so he can quit his job. How much does this lazy bum despise working?

And why not live a little? He and his family spend $62,000 a year when they could easily afford to double it. So much sacrifice just to punch out a couple decades early.

Early retirement doesn’t make sense when you look at it that way. And that’s how most people, perhaps including you the reader, see it from the outside looking in on this fishbowl. But that’s not how it looks from the inside looking out.

I Never Focused on Early Retirement

When I was in medical school, I focused on drinking from the firehose — that is, learning all that I could about the human body and the many ways it can be assaulted by disease. I focused on approaching different hospital rotations with an open mind. I focused on learning what various types of doctors liked and disliked about their jobs, and discovering which specialty might be the best fit for me. I did not focus on retiring early. 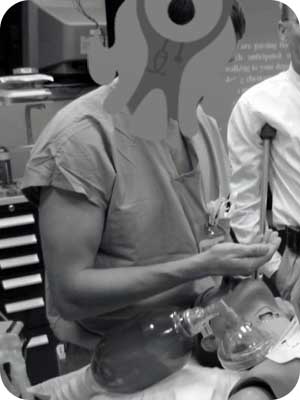 As an anesthesia resident, I focused on maintaining my sanity while working long, stressful hours. I focused on learning enough and doing enough to feel confident as an anesthesiologist who would have no backup in a few short years. I may have focused some extra attention on a particular grad student who caught my eye and later became my wife, but I didn’t once focus on early retirement.

As a practicing physician, I focused on finding a job that would be a good fit for myself and my growing family. I focused on being a good physician citizen, volunteering my time to serve on committees and the hospital Board (which led to me being sued for millions). I focused on maintaining and honing my skills, and building good working relationships with colleagues.

I thought that after twenty years or so, I might want to be a locum tenens physician again once we had an empty nest and the freedom to roam. After that, I figured I might be in good shape to retire early in my mid-to-late fifties, or maybe just press on until I could call myself a decamillionaire.

When I accepted my current job late in 2013, I was happy with the timing of the move for my family. My elder son would start kindergarten the following year, and both of our boys would have a chance to start and finish their formal schooling in the same K-12 school system, just as my brother and I did. I thought we were done moving around. It was the best job I’d had, and it still is.

I read about something called financial independence.

I realized I had that something, a something that meant I didn’t really have to work anymore. Not for money, anyway. That something wasn’t anything I had been chasing. We had simply been living our lives in a way that naturally led us to be financially independent within a decade of launching my career.

It was quite a revelation.

So, a couple years ago, I realized that I could realistically retire at any time while maintaining our current lifestyle. This came about in less than half the number of years I had figured I’d be working full time. Being content with the status quo, I wasn’t about to make any sudden changes, but I was ready to start exploring alternatives to maintaining the status quo indefinitely.

Like Josh Gates with a treasure map, I started slashing my way through the jungle of FIRE blogs. Mr. Money Mustache led me to Jim Collins and Mr. 1500. I read about people living out amazing dreams — J.D. Roth touring the country in a motorhome, like Courtney & Steve @ Think Save Retire are doing in their Airstream.

Bob Clyatt, author of Work More, Live Less became a sculptor. Carl Richards, author of The One Page Financial Plan is living with his family in New Zealand. Could we do something like that?

Of course we could.

While none of these guys and gals have stopped earning an income completely, they have stopped working the demanding jobs that allowed them to be financially free. For the most part, their endeavors are location independent and pursued by choice and not out of necessity.

Those who are driven and successful early in life are not likely to go from 6th gear to neutral overnight. Financial independence has allowed them to drive at a more leisurely pace on the roads of their own choosing. Rocky roads are avoided unless we’re talking sundaes.

It’s been a couple years since I realized I was already in One More Year mode, padding the nest egg and donor advised fund, and I’m just beginning to explore the possibility of slowing down. I can’t say exactly how that would be for me; it’s surreal to contemplate the option of working maybe half as much or not at all after keeping the pedal to the metal since junior high.

While it may seem odd, that doesn’t mean it’s not enticing. I feel like I’ve been given this once-in-a-lifetime opportunity to live a life less ordinary, and I would be a fool not to explore it further. After more than a year each of contemplation and now writing about the topic, I’m more excited than ever.

While I may not have pursued an early retirement, that plane is at the gate, and I’m holding this golden ticket called financial independence. They haven’t called my zone yet, but when they do, I can tell the pilot where we want to go. Why wouldn’t I walk down that jetway and hop on board?

Of course, if you’ve read much about retirement, you know it’s best to retire to something, rather than from something. Or better yet, retire on something. I have taken that advice to heart, compiling a list of 50 ways I’d like to spend my time as an early retiree.

For the first decade, we’ll have our boys with us as we help them navigate those awkward years between elementary school and adulthood. We’ll get to do that as a pair of “stay-at-home” parents, although with the freedom we’ll have, I’m not sure we’ll be all that homebound.

The world is our oyster, and we plan to take full advantage of the time we have with our boys to show them as much of this globe as we possibly can. I’m a lucky man, but I might be third luckiest male in our household.

Luckily, She Chose Me

I am eternally grateful that early retirement chose me, and not the other way around.

If I had discovered the FIRE movement as a medical student, and made early retirement a goal, I might have spent the last fifteen-plus years wishing life away. It would have been awfully tough to embark on a career with the express goal of finding my way out of it.

I’m not saying financial independence shouldn’t be in everyone’s sights. It’s a great goal, and I challenge anyone enjoying a six-figure salary to live on half to expedite the process. It’s true, of course, that you don’t have to hate your job to want financial independence, and you don’t have to retire once you have FI. You can keep right on working as long as you want, but you’ll have the leverage to work in the way that you want.

Regardless, while I am enthusiastically anticipating our upcoming adventures, such an early retirement was not even a blip on my radar screen just a few years ago. It wasn’t until I realized I had the option that I started to consider it.

I wouldn’t have it any other way.

Is financial independence or early retirement something you’ve actively pursued? Did you stumble into it by being a diligent saver and investor? Would your retire within five years once you realized you could afford to do so?

78 thoughts on “Early Retirement Chose Me”