Real Estate investing has been the topic of discussion lately. Yesterday, Jim from Route to Retire discussed why, despite being a huge fan of real estate, he was getting out of the game -completely. Today, we’ll cover the concept of an “infinite return.”

While I love the idea of returns that go to ∞, I’m not completely sold on the idea. Be sure to read to the end for additional commentary from The White Coat Ivestor and me that was made in the comments section when this post was originally written by Dr. Peter Kim. You’ll see that we’re not at all afraid to call each other out when we don’t see eye to eye on a topic.

See how Dr. Kim makes his case for what it takes to earn infinite returns when investing in real estate and what the term means to him.

How to Get an Infinite Return Investing in Real Estate 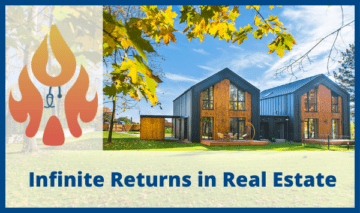 I’ll be honest; the first time I discovered the concept of “infinite returns,” I had a hard time wrapping my mind around it. I’m very familiar with terms like “return on investment” or “annualized returns,” and I often use these concepts when determining whether an investment is worth it or not.

But an infinite return? It sounded intriguing . . . but it also sounded like just another marketing buzzword. However, I decided to do a deeper dive into this concept, which I’ve found.

What is an Infinite Return?

The definition is quite simple. “Infinite returns” are achieved when you no longer have any money in a deal, but you are still receiving the benefits of cash flow and other returns (like when a property sells).

Then you continue to receive distributions and cash flow based on your stake (10%), and in the future, if the property is sold, you would get a profit based on your percentage.

When you receive your full $100,000 initial investment back, you no longer have any investment in the deal. That money can be spent or invested elsewhere. You also technically can’t lose money – everything from that point is true gains. It’s like the term “playing with house money.”

So, if Return On Investment (ROI) is calculated as:

If you received $10,000 that year in distributions but no longer have any money in the deal, you can see where this idea of an “infinite” return comes from. You receive investment income with no money tied up and no risk involved.

I’ve found that there are two common ways to achieve infinite returns, specifically in real estate. They are:

Let’s take a look at each one of these in greater depth.

A no-money-down purchase is exactly what it sounds like – you purchase a property without a down payment. Though traditional methods would have you make a sizable down payment, I know of many physicians who have been able to purchase properties using this exact method and with great success.

You’d be hard-pressed today to find a conventional bank that is willing to finance 100% of a purchase, so you don’t need to put down a down payment. However, if you get creative enough, there are still other ways to make it happen.

For example, I know investors who have had the property’s seller agree to “carry the loan” themselves for the full purchase amount. In other words, instead of having a bank lend you the money for the investment, the seller agrees to sell the property to you. You then pay the seller monthly, just as if you were getting a loan from them.

The collateral is the property itself, and terms are created just as with a normal bank: the amount of the loan, the interest rate, and the length of the term.

If this is a rental property, the investor can receive cash flow from the property even while the seller carries the debt. This can result in an infinite return scenario where no money went into the deal initially, but you’re able to benefit from the cash flow the property provides.

Alternatively, I’ve seen physicians purchase their primary homes using a 0% down physician loan. They then sell the home after it’s appreciated and gain a profit—all of this without putting an initial downpayment.

Of course, they’re usually using the profit to put down a down payment for another home, but that profit was created with a no-money-down purchase.

Both of these situations are considered no-money-down purchases and can result in an infinite return scenario.

The other situation is a bit more interesting to me and more of a strategy I look to take advantage of whenever I look for investment properties or passive real estate opportunities.

Here is the process in brief:

Let’s dive into this a bit deeper.

How is a Property Valued?

First, how is a property valued? Well, a multifamily property is valued by this simple equation:

Capitalization Rate (Cap Rate) is a value used to estimate a property’s profitability that is especially useful for comparing properties. Another way to say it is that the cap rate is the expected cash on cash return of property (excluding any mortgages or debt payments).

Taking these measures is what’s known as “forced appreciation” or “forced value creation.” It’s like taking a business and improving the operations, which then increases its value.

Oh, and you still receive whatever cash flow it provides monthly. This whole process is tax-free until you sell.

This is what’s known as a cash-out refinance, and at this point, you’ve essentially achieved infinite return status. Moving forward, you have no more personal money in the deal, but you have the property, the cash flow, and the equity when you sell.

Can You Receive Infinite Returns in Passive Real Estate Investing?

Absolutely. When I invest in passive real estate syndications, this is one of the strategies I try to seek out.

Instead of you doing all the work to find the property, renovate it, increase rents, manage expenses, refinance, etc., you now leverage a team of professionals to accomplish this.

After all, the main goal of all my investing is for cash flow, and I’m trying to find the right balance of leveraging my time and effort to achieve the maximal result. What better way is there to have cash flow than in a deal where you have no more of your own funds tied up in it?

I didn’t really know what I was doing with my first syndication deal. Luckily, it just happened to become an infinite return situation, as you’ll see below. I’ll write a fully detailed post on it in the future, but here it is in brief:

On November 30, 2015, I received $13,188.36 as a distribution. The sponsors had improved operations quickly and refinanced the property, and returned some of my capital. That’s 53% of my original invested capital returned to me after 14 months, leaving me with 47% of my capital in the deal.

Every quarter I continued to receive distributions averaging $300-350. On occasion, I would receive larger distributions (around $4,000-5,000) as they could return more capital to me.

On March 31, 2018, I received a distribution that put my total cumulative distributions over my $25,000 initial investment.

At this point, it meant that I no longer had any capital invested in the deal, and everything from that point forward was pure gravy. That happened in 3.5 years.

But let’s remember, I have zero investment currently in the deal. Yes, it’s 7% if I’m considering my initial investment, but technically, it’s an infinite return in cash flow since I have no more money in the deal.

Not only that, but I still own a 1.04% stake in a building that just got appraised at $13.49 million. So if that sold, I would be receiving a nice profit. However, I’m happy with the infinite return cash flow I’m currently receiving.

Oh, and here’s the kicker: it’s all been tax-free. Because of depreciation, I’ve shown a negative net rental income each year. So if anything, it’s offset any other passive income gains that I’ve received.

Should You Be Looking For Infinite Returns?

There are many ways to achieve great returns when investing, especially in real estate. As it turns out, “infinite returns” is much more than a buzzword; it’s a powerful way to maximize returns while reducing risk, which is basically the holy grail of investing.

It’s also only one strategy when investing in real estate, but it’s definitely one of the tools I seek to use when making new investments.

[PoF: As promised, comments on this concept from WCI and me:

Based on the definition, I guess any investment that doubles will give you an “infinite return” from that point after. Most of my index fund investments from 5+ years ago meet the definition, and even pay quarterly dividends.

Infinite Returns sound sexy, but to me, it’s just a doubling of your money (with continued growth / returns).

This concept is kind of scammy. It’s just a feel good thing. “I’m getting an infinite return.” No, you’re not. Put the numbers into XIRR and it’ll tell you what return really is and it isn’t infinite.

The real “infinite return” could come from buying an investment property with nothing down, no closing costs, and no effort. Of course, that property is usually going to be cash flow negative and thus give you a negative infinite return!

I also disagree with your statement that you cannot lose money after you get your capital out. Imagine you invest $100K into a $400K property. A few years later, you pull $100K out of it with a refinance. Can’t lose money, right? But why couldn’t that property lose value and start having negative cash flow at that point? It absolutely could and you, as the owner, would be losing money.

It’s fun to think about being able to pull your capital out and put it to work elsewhere, but “infinite return” is just a marketing buzzword, and a scammy one at that.

The more I think about this, I think the key to it is understanding the difference between total return and cash on cash return. You can certainly get an infinite cash on cash return, especially if you only look at the return moving forward from a cash out refinance. But that’s probably not the best return to be looking at.]

Does this concept seem appealing to you? Have you utilized this strategy in your investing?