Investing in a bear market sure is exciting, isn’t it?

My first day on the job was July 3, 2006. It was a one-week locum tenens assignment in Punta Gorda, Florida that I started just after graduating from residency. The Dow Jones Industrial average (DJI) stood at 11,090, or about 500 points below where it was when I kicked off the new millennium on Bourbon Street wondering if the Y2K bug was real or not on January 1, 2000..

There was reason to be pessimistic about stock market returns. After all, a dollar invested six and a half years earlier was worth less than a dollar at the time.

I knew, however, to expect turbulence and volatility. I opened a SEP IRA (in hindsight, I’d open a solo 401(k) instead), and I maxed it out, investing in mutual funds to the tune of about $50,000 a year.

Then things took a turn for the worse.

My investing behavior over the proceeding five years would determine my fate.

How to Get Wealthy Investing in a Bear Market

I hope, by now, you’re familiar with the term “stay the course.” It’s the title of John Bogle’s book telling the story of Vanguard and the index fund revolution. It’s also the answer to many of the “what should I do now” questions that pop up when a bear market rears its ugly head. These are not rare events; a bear market occurs about every three years, on average.

To say that things took a turn for the worse for equities after October of 2007 is an understatement. By March of 2008, the DJI dropped below 12,000. It dropped below 11,000 in September of 2008, erasing any gains from the decade, and the pain had just begun.

The market had always bounced back before, but this felt different to a lot of folks. Goldman Sachs warned investors that another 40% drop could be in order.

The market did not drop another 40% but rather rebounded in fits and spurts, finally surpassing 14,000 in February of 2013 and more than doubled a second time, peaking at about 28,700 in February of 2020 before the next bear market began.

I saw those initial investments I made early in my career tank. Subsequent investments tanked a little less. But the overall trajectory for 18 months was down, down, down. It was a true stock market crash and part of one of the worst recessions in U.S. history.

It wasn’t easy, but I continued putting money into those mutual funds. I rode the wave down and by March of 2009, that SEP IRA was worth quite a bit less than the money I had put in.

Those were busy years in my life. I got married in 2007; we had our first child in 2008. We broke ground on a big, beautiful new home in the fall of 2007 and moved in May of 2008. I settled into my first “permanent” job as an anesthesiologist, taking call every third night and weekend with no post-call day off.

In hindsight, it’s a shame I didn’t have more money to invest at the time, but a good chunk of my income went into the new home, the wedding, the honeymoon, new things for the baby, etc…

I was maxing out that SEP IRA every year, and by 2010, we were past many of the “one-time expenses.” I started a taxable account with money that I earned doing some extra locum tenens work on the side that summer. At that time, the DJI was at about 10,000.

In February of 2013, the DJI finally reached 14,000 again, and it was up to 18,000 a year later. If the reinvestment of dividends are factored in, the recovery was a little bit quicker.

The S&P 500 calculator at DQYDJ shows about a 1.5% positive return from the peak in October 2007 by August of 2012. You had your original dollar (plus a penny and a half) back in four years and 10 months. 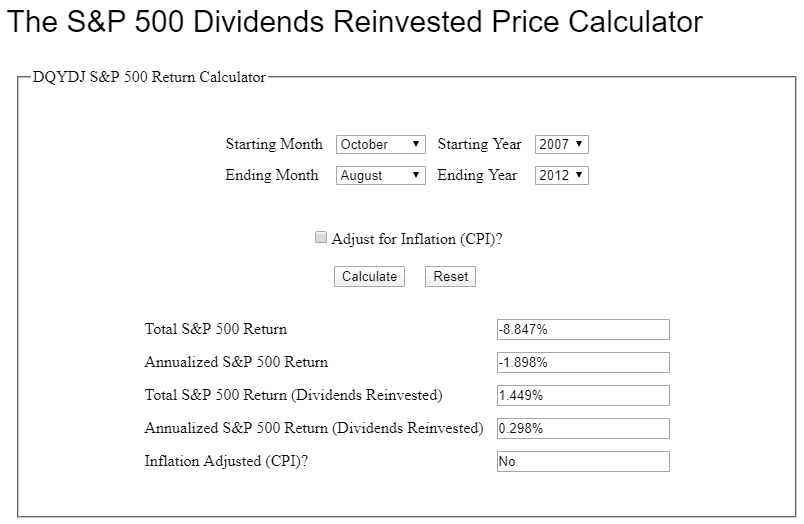 That same dollar invested at the pre-recession peak in October of 2007 before the financial crisis was worth $3.47 by April of 2021.

The Benefits of Investing in a Bear Market

Let’s look at three hypothetical scenarios with nice round numbers to make the math simple. All three scenarios will have the market beginning and ending the year at 10,000 points, and we’ll invest $10,000 into these markets each month. Shares will have a valuation of $100 apiece to start the year.

In the second, the market remains steady at 10,000 points. 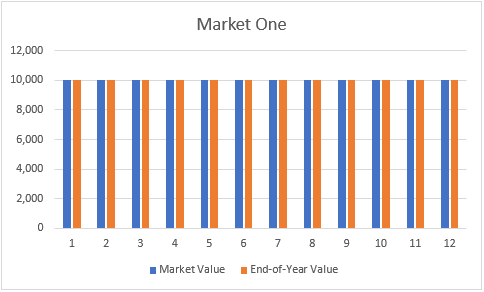 The blue line represents the value of the stock market in each month. The orange is the end-of year value of a $10,000 investment in the stock market during that month. It makes sense that these are equal when the market doesn’t budge.

A bear market is defined as a drop of at least 20%. This market drops a total of 40% over four months, stalls there for a third of the year, and climbs back to previous highs by the end of the year.

As you can see in the chart and graph below, the lower the market drops, the higher the end-of year value you get for each $10,000 investment.

Note that all the market did was recover its losses. It’s not actually up at all at the end of the year as compared to the start, but you end up with 35% more money than you invested by the time the year comes to a close. 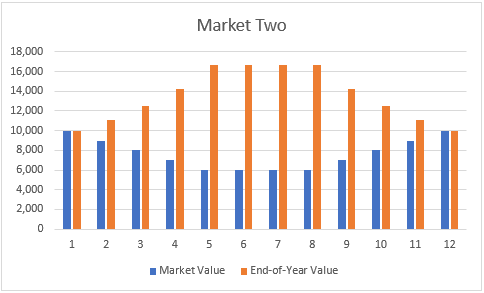 In our third hypothetical market, things look really good to kick off the year, we ride high throughout the summer, but the market takes back its gains to begin a long, dark winter.

As in the other two scenarios, we end the year where we started, with a total market value of 10,000.

In this scenario, our $10,000 doesn’t go as far, purchasing only 71 shares when the market peaks throughout the summer.

As the market comes back down to earth, we’re getting 100 shares with our $10,000 by December, but the total value of our investment portfolio at the end of the year is $98,805. 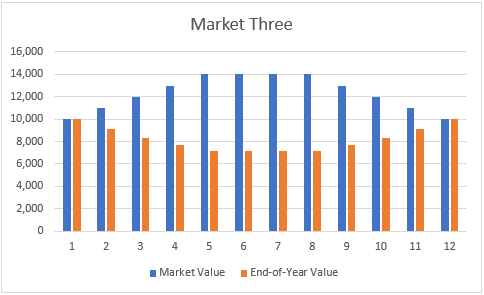 What Not to Do in  a Bear Market

Loss aversion is powerful. We don’t like losing money, and when we see our investments lose value rapidly, as they did to the tune of over 35% in a few weeks from late February to mid-March of 2020, it can be really difficult to stay the course.

How do people respond?

Some stop investing. They want to wait until the dust settles. If you do that, you won’t be buying “stocks on sale” at a discount, and I doubt you’ll start investing when the market is at the trough (which can only be seen in hindsight) and fear is at its highest. This can be a costly mistake.

Some try market timing. The goal is to sell high and buy low. Most who try to time the market fail.

If you’re going to park some money on the side, I highly suggest having a pre-determined plan to get back into the market at certain levels that accounts for both the possibility of a further decline and the possibility that your timing was unfortunate and you sold at the bottom.

I’m not advocating for the approach at all, but based on posts in my fatFIRE (for everyone) and Physicians on FIRE (MD, DO only) Facebook groups, I know a lot of people have already done so. If that’s you, be methodical about your approach to reinvesting or you’ll be making an emotion-based decision with your money every day.

It can be difficult not to market-time in some fashion. A “friend of mine,” let’s call him FoP, attempted to tax loss harvest from a mutual fund to an ETF when the market was hit a new low on 3/23/2020. By the time the markets opened up the next day, the ETF had shot up 5%. FoP has been sitting on a big pile of cash for three weeks now, waiting for his limit order to be filled for the purchase of an international ETF at the equivalent price he sold the mutual fund at. It may never happen.

Don’t decide that now is the time to alter your asset allocation. If you realize that your risk tolerance is not as high as you thought it was, make a change after the market correction has passed and a new bull market is beginning. Switching to a portfolio with a higher allocation to bonds in the middle of a bear market only locks in some of those stock losses.

Don’t Look Back in Anger

In January and February, it became clear that the novel coronavirus epidemic that began in China was on its way to becoming a worldwide pandemic.

Frankly, I was really surprised that the stock market was continuing to rise in spite of this ominous threat. That information was baked in to the current valuations, I figured, and if this pending pandemic was going to cause major market disruptions, it would have done so by then. Right?

I’ve never acted on hunches before, and I wasn’t about to start then. Looking back, it seems so clear that the market was overdue for a fall and this pandemic would be the catalyst.

Of course, pundits have been talking about the market that’s about to plummet since about 2011. If you had acted then and sold stocks, you would have missed out more than doubling your money, even factoring in the recent decline.

It always looks so easy to look at past performance and just say “I had sold here, bought here, sold again here and then bought back in at this point, I’d be rich now!” The problem is, as Vagabond MD says as he recounts his first bear market, “nobody rings a bell at the bottom.”

The Role of a Written Investment Plan

You’ve seen how you can benefit from investing in a bear market. The only requirements are that the market bounces back eventually, as it has done in 100% of the 20-some bear markets this country has seen over the last century, and that you continue to invest through thick and thin.

Times like these are a wonderful time to refer to your written investment plan. Don’t stray from it. If you don’t have one yet, now would be a great time to write one out.

It doesn’t have to be complicated. It can start with a desired asset allocation and a monthly investment amount on a post-it note. You can expand upon it from there.

Here’s my investor policy statement, which I update about once per year. As you can see, it’s due for an update.

Having that written plan can help keep you from wavering when times get tough.

Recovery From the 2020 Bear Market

I once described the Great recession and recovery as a Nike Swoosh, a sort of U-shaped recovery that took years. We see a similar pattern over a much shorter timeframe if we look at 2020 and the first part of 2021.

I am thankful that I stayed the course throughout the two biggest shockwaves to the stock market in the last 20 years. Bear markets can be frightening, but investing through them can also be very rewarding.

How have you been investing in this bear market? Did you learn any lessons from prior bear markets?