For centuries, most people were both minimalist and frugal. Not necessarily by choice, but out of necessity. Go back a century or more and you’ll find smaller homes, goods that were more expensive to produce and transport, and a whole lot of people that couldn’t afford to be anything but frugal and minimalist.

Today, many American families have the luxury of choosing to be frugal, minimalist, or neither. Minimalists are a small but growing subset of the population, and many families in the middle class and above would not be considered frugal, at least not to the extent previous generations might have been.

Nevertheless, many of us, particularly those with a bent for financial independence, strive to be frugal and perhaps minimalist, too. Personally, I’ve found that the two concepts are often at odds with one another. I appreciate both concepts for the benefits they provide, but struggle to embrace them simultaneously.

I’m not saying there’s no common ground. There is at least a little bit, and we’ll get to that eventually — but first let’s talk about the many ways in which they are incompatible.

A frugal person does not like to waste anything. If something doesn’t have a purpose, you find one for it or assume you will eventually. You look for value in everything and are very price sensitive. Frugality is a good way to pursue financial independence.

A minimalist does not like to waste space on anything that doesn’t have value. If something doesn’t have a purpose, it’s gone. You look for value and function and are not necessarily price sensitive. Minimalism is more easily practiced as you approach or have achieved financial independence.

The Difference between a Minimalist and a Frugal Person

A minimalist will discard things based on rules.

A frugal person scoffs at such rules.

For example, the minimalists have given us the following rules:

If I followed the 90/90 rule, I wouldn’t have anything seasonal. No snowblower, skis, or winter jacket. No rakes. No fertilizer, lawn mower, or hummingbird feeder. Ok, I don’t actually own a hummingbird feeder, but you get the point.

The frugal person in me shuns the 20/20 rule as well. I have many non-essential items that can be replaced for under $20 with a click of the Amazon button or the swipe of a credit card. But at some point, I’ve paid for them and had a use for them. The minimalist in me asks if I will again find a purpose for them some day, and the frugal me shouts  back, “YES! Well, probably… I think”

A minimalist will pay top dollar for a high quality item that serves multiple purposes.

A frugal person will own multiple items that each serve an individual purpose.

We have a food processor, a blender, a KitchenAid mixer, a handheld chopper of some sort, and more knives than a late night infomercial. If you need any food mixed up or chopped up, I’m your guy. I can cut stuff six ways ’til Sunday.

A minimalist has a couple good sharp knives and perhaps one device to do all the blending, mixing and chopping. It sits tidily in its own spacious drawer or appliance garage.

A minimalist has a small wardrobe. Quite possibly brand-name and purchased new.

A frugal person has an expansive wardrobe, quite possibly purchased used.

Minimalists have been known to have a few copies of identical clothing, and may wear the same style outfit on a regular basis. If something hasn’t been worn in the last few months, it will find a new home when donated to a local thrift store.

A frugal person purchases the minimalist’s seldom worn clothing at the thrift store. He might still have the polyester disco shirt he last wore at a theme party in 1999. The minimalist buried deep down inside wants to part with it, but it stays, as does the afro wig whose locks haven’t been graced with a pick since 1999.

A minimalist has a half empty (or is it half full) fridge and freezer.

A frugal person has a full fridge, freezer, beverage fridge, and chest freezer.

As a frugal person, I shop at Costco. I buy in bulk and I buy extra when something is on sale. I have friends who purchase fractional portions of livestock and others who hunt and butcher their kill. I seem to buy craft beer at a rate faster than I drink it, and end up “cellaring” a good number of beers to be enjoyed at a later date.

A minimalist shops locally for groceries needed in the next few days and picks up a bottle of wine or six pack of beer with the intention of consuming it. Buying in bulk is out of fashion, and the minimalist is willing to pay the going rate rather than wait for a sale.

A minimalist is less likely to have a large lawn and more likely to hire its maintenance.

A frugal person does all the yardwork, owns a full complement of lawn and garden tools, and quite possibly stores them in a shed.

A minimalist has minimal need for a large yard, and might have none living in a townhome, condo, or apartment.

A frugal person might have a similar living arrangement, but if they’ve got a yard, you can bet they’re willing to put in the time and energy to maintain it.

For example, I’ve collected the Ryobi 40V cordless electric lawn mower, chain saw, weed whip, and leaf blower. I’ve also got a snow blower, a seed spreader, a wood maul, and countless garden tools and hose attachments. I don’t pay anyone to do my yardwork, but I’ve paid plenty to acquire the tools and storing them all takes up some serious real estate in the garage. Yet, I somehow feel frugal for putting in the sweat equity.

A minimalist reads online, purchases e-books, and may have a Kindle Unlimited subscription

A frugal person has shelves full of books, many purchased used, already read, and untouched for years.

Books take up space. Fill a moving box with paperbacks and hard covers and then try to move them. It’s not easy. A minimalist recognizes this and reads mostly electronically.

Me? Yeah, I’ve got books from my childhood on these shelves. For now. 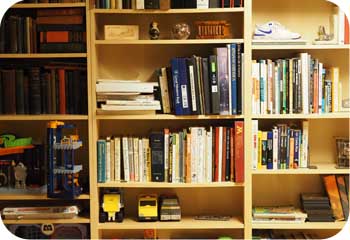 Where Frugality and Minimalism Converge

I was born with the Frugal Gene. Or if I wasn’t born this way, I was raised by parents who absolutely love a good deal and think minimalism means having only one pole barn for storage. And even by this extraordinarily forgiving definition, they’re far from minimalists. And that’s okay; it works for them.

Personally, I would like to find a happy medium between frugality and minimalism. While it wasn’t difficult to contrast the two mentalities, there is some common ground.

Adopting a minimalist mentality, I’ll buy fewer things in the future. That will save money, even if I do spend a little more on the quality goods I do purchase.

A minimalist doesn’t need as much storage space. Not only does that mean fewer shelves, plastic tubs, and closet space, but also a smaller home. That’s less house to rent or buy, cool or heat. There’s some additional savings.

Becoming more minimalist, as I have attempted to do, results in box after box of donations. I have taken monthly trips to the Habitat Restore, Salvation Army, or Goodwill, resulting in many receipts. Although I carry no mortgage, I donate plenty of money, and so I itemize my deductions. Every box of donations lowers my tax bill. A frugal win.

Related: A Physician Takes a Step Towards Minimalism

Finally, I feel it’s simply easier to choose minimalism when you are in a position of financial independence. You can afford to replace items needed them after parting with what you thought you’d never use again. You’re able to spend the extra dollars for the high-quality object that might do more or last longer. It’s easier to adopt an abundance mentality when your personal resources are indeed abundant.

Interested in hearing more about this internal struggle? This post was the basis for ChooseFI podcast episode #29. The Aspiring Minimalist versus The Reluctant Frugalist.

Do you have minimalist or frugal tendencies? Neither? Which characteristics would you rather adopt? Have you found a happy medium? Let me know below!

72 thoughts on “Minimalism versus Frugality: Can They Coexist?”