On a recent vacation, my wife and I stopped at a thrift store in Franklin, Tennessee. Thrift stores are a good place to pick up kitschy shirts, broken in jeans, and if we’re lucky, a nice Columbia jacket for the kids that someone else’s kid grew out of after one season.

Thrift stores are only one of several sources of new or new-to-us clothing. We receive clothing as gifts. We might pick up a shirt as a souvenir. We pick things up from Amazon Fashion. We even shop at actual retail stores on occasion. We hit the clearance racks, of course. I am a relatively frugal physician, you know.

Our little walk-in closet has been feeling a bit overstuffed. A while back, my wife told me about the “one in, one out” principle. When you add a piece to the wardrobe, something’s got to go to make room. The math makes sense, but it’s hard to get rid of something that’s still good. Something you might wear. Something you might miss if it’s no longer yours.

The Tennessee thrift store was one of the best organized I’d ever seen, and I’ve seen a few thrift stores. I looked past the clothing aisles. As a non-adopter of the “one in, one out” rule, I’ve pretty much run out of room for more clothing, so I hit up the bookshelves instead (not that there’s much room on our bookshelves, either).

For forty-nine cents, I picked up a gem of a paperback that spoke to me: Scaling Down. Living Large in a Smaller Space by Culbertson & Decker. What did this book say when it spoke? On Page 3, it said “…people spend the first 40 years of their life enthusiastically accumulating and the next 40 years trying to get rid of the excess.” As a forty-something lifelong accumulator, I’d say that sounds about right.

A Physician Takes a Step Towards Minimalism

The Scaling Down book was published in 2005, before there was a Minimalism film and minimalist blogs such as Break the Twitch, Becoming Minimalist, and The Minimalists. While I’m not sure if any form of the word minimalism appears in the book I picked up, it really is an excellent manual explaining how and why we should start to get rid of the excess stuff in our lives. A minimalist book before minimalist was a cool thing to be.

“…people spend the first 40 years of their life enthusiastically accumulating and the next 40 years trying to get rid of the excess.”

The point of the book, and the minimalist movement, is that you can and will live better with less. Physical clutter becomes mental clutter. The state of the junk drawer and storage closet can affect our state of mind. We spend too much time and energy storing, maintaining, and organizing so much stuff, and when we might actually want or need that one thing, remembering where it is and finding it can be a challenge.

This was the case with our closet. I’m not sure which shorts fit best, but I know it’s in that pile somewhere. Probably needs to be ironed. I’ll just wear what’s on top this week. I’ve got a few polo shirts that fit nicely, but the collars are permacreased from being squeezed amongst so many other polo, cocktail, athletic, and Hawaiian shirts.

The book’s authors state that they are often asked for a magic bullet. While they don’t have one, the closest approximation they can offer is to start by getting rid of half your stuff. Rip it off like a Band-Aid. I like it. I decided to do that with the closet.

Another minimalism book that has been quite popular, and mentioned in the blog before, is The Life Changing Magic of Tidying Up: The Japanese Art of Decluttering and Organizing by Kondo. While I haven’t read it, my wife has, and half of the closet is hers. The author of this book recommends taking everything out and putting it in a big pile in the middle of the room, a tactic employed by the good doctor known as the Happy Philosopher. Since my wife and I are attacking the closet together, we decide to use this strategy, too.

Dealing with the Excess

On a recent post-call Monday, we approached the undersized, yet bloated closet. On my side, hangers weren’t really needed. Force clothes apart, squeeze shirt in, let go, and it all compresses once again nicely. My closet is an anti-gravity chamber. I still used hangers to keep up appearances, but they were decorative hangers. Here’s the Before pictures. 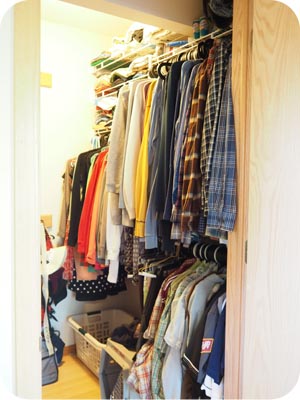 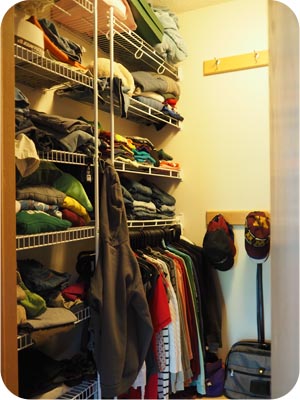 While we didn’t exactly toss it all into one big pile, it didn’t take long to empty out. I hadn’t seen the closet look like this since we moved in nearly three years ago. The rest of the room didn’t look so good. 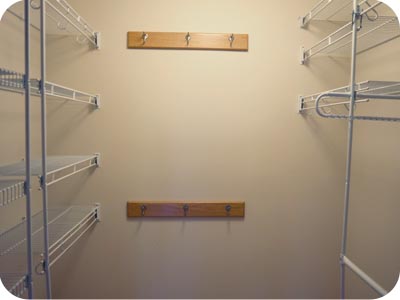 I counted 88 tee shirts, 94 hanging shirts, 20 hats, 8 belts, 6 sweaters, and 4 jerseys. I had verbally committed to parting with half. 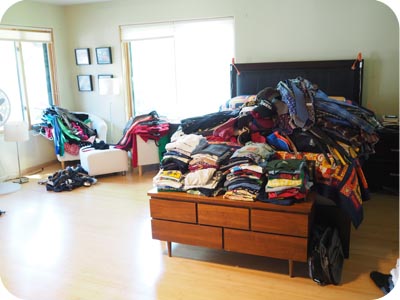 I thought this would be the hardest part. Many items were gifts. Some have a story or hold sentimental value. I’ve made memories in these clothes, some of which were vividly recollected as I sorted through the cotton and polyester mountain.

Like the time I saw Bob Dylan kick off his European tour in Stockholm’s Epcot-esque hockey arena formerly known as Globen as a medical exchange student. Or the time I presented research as an undergrad at the Society of Transplant Surgeons meeting in Chicago. I’ve had the red #23 jersey from the surgeons’ hockey game for nearly twenty years, and I probably haven’t worn it since that night.

It wasn’t tough at all. Not only had I verbally committed to parting with half, but I had also mentioned it on this blog. I wasn’t about to tell you all how I failed. While I did send quite a few items to the donation box that I felt I might miss, I know deep down that I wouldn’t.

The Scaling Down book has an answer to every imaginable excuse we tell ourselves for hanging on to things we don’t really need. When all was said and done, I had jettisoned 44 tee shirts, 47 hanging shirts, 10 hats, 3 sweaters, and 2 jerseys.

The closet came back together nicely. Hangers are once again required, and I can slide garments back and forth with ease. We have a couple empty shelves, and I haven’t had any inclination to fill them up with anything new. The empty shelves are badges of successful minimalizing, and I wear them with pride. 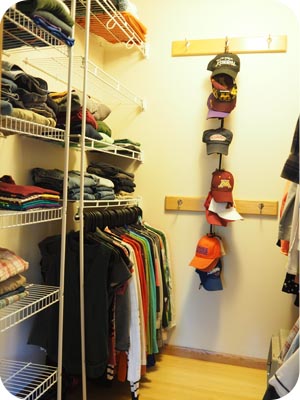 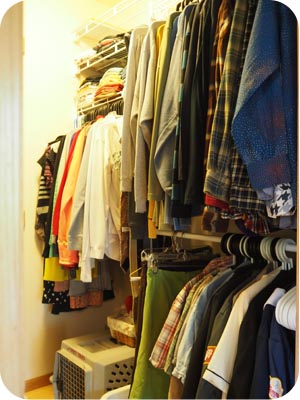 My wife and I went through the gargantuan garment pile piece by piece, logging what we were giving away with enough detail to assign a reasonable value to the Himalayan clothes heap. I like to use the Salvation Army’s Donation Value Guide to assign a dollar amount. We boxed everything up into three decent sized moving boxes, and dropped them off at our neighborhood Salvation Army. 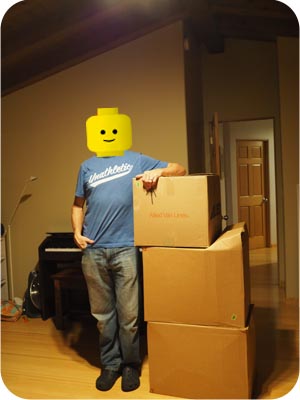 After one week, I hadn’t fished out a single article of clothing from the box pile. I didn’t feel one iota of regret. I managed to say sayonara to over one hundred items, but that means I still have over a hundred left, including this 100% polyester bad boy that over the last two decades has survived many themed and non-themed parties, and two spring breaks in Acapulco.

My first step towards being more minimalist was a good one for this recovering maximalist. It worked! It felt right. It was cathartic.

We’ve got many more rooms and areas to cover, but if we can approach them with the same no-holds-barred, this-might-hurt-a-bit attitude, I believe we will achieve our goals of lightening our load, simplifying our lives, and actually knowing what we have and where to find it. I wish we would have done this three moves ago.

For further reading on minimalism, check out Minimalism versus Frugality: Can They Coexist? as I delve further into my thoughts on minimalism, and how it can be at odds with a frugality mindset.

Have you attempted a similar undertaking? Do you tend to be minimalist, or are you a maximalist who sees empty storage as a vacuum waiting to be filled? Most likely you fall somewhere in between.

58 thoughts on “A Physician Takes a Step Towards Minimalism”