And I don’t love it.

When I gained acceptance into medical school, I thought I would one day have one amazing job, or at least one job title where I might get to wear several meaningful hats.

I wasn’t entirely wrong. I do have one job title. I’m a physician. Some days I’m referred to as a provider, but I’ve learned to ignore that term. To be more specific, I’m an anesthesiologist. Some days I feel more like a physican scribe, and I’m always a mouse jockey.

Some days, I’m referred to as an MDA, a term that, to the best of my knowledge, stands for the Muscular Dystrophy Association or any of seven different “M” states’ Dental Associations. I don’t like to respond to that term, either.

I am a Medical Doctor

I’m a physician. It’s my duty to play a role in improving the health and the lives of my patients. I studied and trained for many years to have the privilege of understanding the inner workings of the human body, the many ways it can be assaulted by disease, trauma, and time, and ways to combat those ailments to the best of my ability.

As an anesthesiologist, I have many tools at my disposal, and I help orchestrate the patient’s perioperative experience. I use medications, video laryngoscopes, long, sharp needles, ultrasound, and other innovative products and technologies to render a patient’s mind, or parts of his and her anatomy, insensate to pain during surgery. I ensure that the body’s systems survive with as little insult as possible.

When surgery is complete, I help alleviate the patient’s pain. That process actually started in the pre-operative holding area when I prescribed a few pills to take as part of a multi-modal approach to pain management, or when I performed the peripheral nerve block or placed a thoracic epidural catheter.

There’s a more personal side to my job, as well. I’m the calm voice discussing a patient’s health history and how it relates to our anesthetic plan. I instill confidence in the mothers, father, siblings, sons and daughters who are anxious for their loved one and what they’re about to endure. I can’t do it all alone. I work with a team that is focused on the same goals: patient safety and patient comfort.

I’m honored to have this job, and other than the occasional stressful moments, what’s not to love?

Well… I’ve only described about one third of my job. I spend just as much time sitting at a computer typing and clicking away, or at a desk or counter, filling page after page with bad handwriting until the day is done.

I work in two different facilities. In one, our documentation occurs almost exclusively on paper. At the other, nearly all the “paperwork” is recorded on a computer. Which do I prefer? Neither.

I’ll start with the paper program. On a busy day, I’ll arrive an hour before the first patient arrives in the parking lot. If I’ve got 30 patients, I’ve got 30 anesthesia pre-evaluations to fill out. That’s 30 lists of medications to transcribe. 30 past medical histories to read, process, and jot down in acronym form. 30 allergy lists to review and determine which drugs the patient could potentially be exposed to, and which among those might be true allergies. Epinephrine gives you the jitters? Good to know.

Some of this is done on the fly throughout the day, but a head start on the charts gives me a fighting chance to meet the day’s many other expectations without major delays.

If I’m going to be working at the same facility in the next couple days, I might spend a good 5 minutes each with another 20 or 30 charts before heading out for the day (or evening). I call it good when I’ve gotten through all the charts, or when writer’s cramp is threatens a permanent claw hand, whichever comes first. 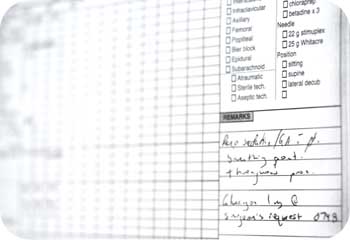 The Computer Saves The Day?

At the 21st century computerized facility, we tend to have fewer patients. A shorter roster is a good thing, because it takes much longer to process each of them via computer, despite all that was promised when the electronic health record was mandated.

A wonderful feature of the computer is the automated compilation that occurs. In the old days, pertinent medical history was collected from the patient and written down, typed or transcribed. Now, all the diagnoses are compiled automatically from a variety of sources. Actinic keratosis. Seborrheic dermatitis. Compensated heart failure. Decompensated heart failure. Status post menopause. Peyronie’s disease.

Somewhere in that forest is a tree. All I have to do is tease out which trees are still standing, and which among those have any bearing on the patient’s health as it pertains to their upcoming surgery.

There’s also this super neat list called pertinent negatives. Sandwiched on the screen between the Problem List and Medical History, two lists which are similar but contain only partial overlap, exists a list of bad things the patient doesn’t have. Using the same font and appearing among all the diagnoses that the patient does have (or has had) are these things that the computer wants me to know the patient does not have.

Have I inadvertently mistaken something on this list for a pertinent positive? Yes, I have. Have I received cross looks from a patient and her husband when I said something about a cervical cancer that appeared in that list? Oh, yes I have. 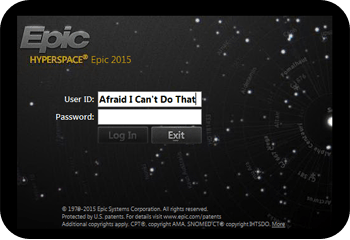 At least when I sign the standard order sheet on paper, another sheet of paper doesn’t appear on top of the paper I’m trying to sign, alerting me to the same eleven irrelevant warnings that I see every time I try to sign the paper.

Thankfully, on paper, I don’t have to roll that extra-tall paper into a scroll and push a button to make it go away. The paper version doesn’t pause for five seconds, then ask me if the preoperative and postoperative orders should be associated with the operation the patient is having that day, and when I agree, make me wait another five seconds to let me sign them.

Can Scribes Ease the Burden of Medical Documentation?

The burdens of documentation have become quite onerous. I do understand the importance of documenting precisely what was done, but when a two-minute nerve block takes twelve minutes to “properly” document, the balance has shifted to burden.

I don’t have the solution, but in recent years, some specialties have found a way to shift some of that burden to hired teammates, the so-called scribes that serve as the doctor’s shadow in the clinic and his fingers on the keyboard.

Is it time to consider scribes for anesthesiology and other specialties where they might ease the burdensome demands of documentation?

[PoF: I wrote this some time ago and have been hesitant to publish it. I tend to be a reasonably positive person, and let’s face it — this is a whiny post.

I finally decided to publish it after changes were made to our order sets that unchecked some of our defaults. Nothing can be done about it, but I was assured our department’s order sets were on the schedule to be revamped so that we wouldn’t have to click an extra 6 to 8 checkboxes (with a few hundred millisecond delay for the check to populate the box) for each patient. When? In two years.

Post-publication update: It’s been two years and still no changes. I’ll be checking far fewer boxes when August 12, 2019 comes along. As in, that’s when I’m leaving my job.]

Which do you find easier? Paper charting or using the electronic health record? Have recent “improvements” made your life easier or more difficult?