For better or worse, a most effective learning tool is readily available to every one of us — our own mistakes. Sharing more than a few of his own, multimillionaire Mr. Tako implores you to Always Be Making Mistakes.

When it comes to, well… anything, it’s never too late to change course, unless you’ve succumbed to the Sunk Cost Fallacy. EJ, the cardiologist @ Dads Dollars & Debts, explains.

In an oldie but goodie, The White Coat Investor asks What Would it Take For You to Retire in 5 Years?

As a wannabe minimalist, I enjoy an article like this one from Chris @ Keep Thrifty. How Much is Your Stuff Costing You?

Burnout expert Dr. Dike Drummond @ Happy MD borrows a couple quotes from Albert in Physician Burnout – how did Einstein get to be such an expert?

I heart travel, and I once circumnavigated the globe for well under $1,000 as a resident. I’m in good company, as the Mad Fientist just shared How to Travel Around the World for Under $1,000.

Medicine is full of acronyms, but the Mystery Money Man introduced me to one I didn’t know. Crush Your Money Goals with a SWOT analysis.

You know my opinion of MOC. Anesthesiologist Karen Sibert, MD of A Penned Point shares hers. The Boards Have Exceeded Their Bounds.
I’m anxious to tell you about my round-the-world trip and why I’m going nowhere despite being on vacation this week. First, I want to tell you about Contract Diagnostics, my very first Site Sponsor, and a potentially invaluable resource if you are looking at signing on to your first doctor job, or any subsequent job for that matter.

Contract Diagnostics does one thing and does it well; they review physician employment contracts. With thousands of reviews under their belt, they have seen it all. Check out the testimonials or review the Physician Contract Questions answered in Parts one, two, and three.

As a firm with a single focus, there’s not a whole lot more to say. They do have an FAQ about their services for you to review, and offer a free consulting session for those interested in learning more.

Around the World in 13 Days

Some twelve and a half years ago, I was an anesthesia resident with two weeks of vacation and one week of CME time per year. I decided to take two thirds of my annual time off in one epic trip.

The itinerary wasn’t around-the-world epic, but I was planning to fly across the country to the ASA annual meeting in Las Vegas, which seemed practically halfway to Japan, and I just happened to have a good buddy living in Osaka. I booked a flight to the far east, with an extended layover in Sin City on the way back.

I had 13 days off and a $1,300 plane ticket. I arrived at the airport with my overstuffed luggage, stoked to embark on the most ambitious trip of my 28 years.

I was ready; the plane wasn’t.

A two-hour delay meant I would miss my connection to Osaka. The airline gave me the “I’m sorry, but you’ll be arriving a day later” line and I came back with “No.”

Eventually, I was rebooked, with part of the trip on a competing airline, and was scheduled to reach my final destination only a few hours later. Instead of Chicago, I was headed to Detroit for the first leg.

A Detour in Detroit 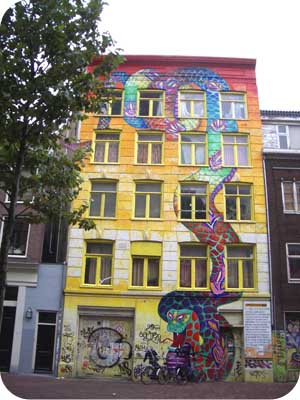 My inauspicious start was met with more turbulence in the motor city. “Flight 666 to Osaka is overbooked. We are looking for volunteers to delay their departure in exchange for a travel voucher of $750.” I made up the flight number, but not the voucher balance. Did somebody say Free travel?

The next flight to Osaka would get me there about 6 hours later than originally planned. Also, I would be heading east, and not west, and have an extended layover in Amsterdam.

It was Sunday morning in Holland, but I wasted no time at the airport. I found a locker for my luggage and headed out into the city. In three hours, I saw the canals, the many bicycles, a museum, this most colorful apartment building, and some ladies in windows with red curtains that appeared to be selling something.

After enjoying a pint of Wieckse Witte before noon (local time, anyway / 5 o’clock somewhere), I made my way back to the airport, where I boarded a plane and flew first class from Amsterdam to Japan.

Japan was a wondrous, crowded place where a Scandinavian towers over the populace. Thanks to Typhoon Tokage, it was a wet week, but we made the most of it.

This isn’t a travel blog — at least not yet — so I’ll move on after one last picture of me in front of one of many vending machines, some of which sell beer, that dotted the streets of Osaka. I traveled on to Las Vegas, had a great conference, and returned home having completed the round-the world trip 67 days faster than Phileas Fogg. 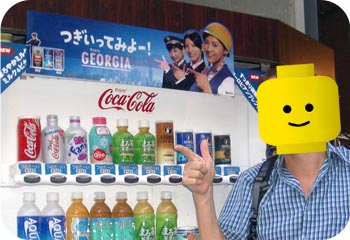 This week, I’m not working, but I won’t venture far from home. It’s my turn to play Mr. Mom (Dr. Mom?) while my wife is away to play on the beaches of Punta Cana with the gals in her extended family.

Gentlemen, if you haven’t done this, I highly recommend taking a solo week to connect more intimately with your kids and fully appreciate all that goes into running a household. I also highly recommend not making any sort of comment to the effect that it was easier than you thought it would be when she returns. I made that mistake. Once.