A surefire way to be included here is to feature me prominently in your post. Mr. 1500 and Rockstar Finance teamed up and did exactly that in Why We Share Our Net Worth So Openly.

With that admission, I would be remiss if I didn’t also include The White Coat Investor who discussed Real Estate and Alternatives in Our Portfolio (shares of this site is one of those “alternatives”).

Bloggers who practice my specialty might get extra attention. Especially when they cover timely topics, like anesthesiologist Tom of High Income Parents did in Tax Credits for High Income Families / Earners.

When a blogger frequently comments and shares my stuff on Twitter, I notice. Then I find a great post they’ve written, like this one from My Sons Father: 5 Lessons I Learned from My Father’s Death.

I know many of my readers are physicians, and they like to hear from other physicians. This one also worked on Wall Street, hence the name. The Wall Street Physician explains How Wall Street is Like a Game of High-Stakes Poker.

I like how my radiologist friend, The Happy Philosopher, uses post-it note graphing technology to aid us all in Understanding the Relationship Between Utility, Happiness, and Cost.

He’s not a physician, but the Gen Y Finance Guy earns as much or more than most of us. He also retweets all my new posts (yep, I noticed), scoring bonus points! He also plans on making Big Money Moves in 2017 — Putting Over $250,000 to Work.

The Biglaw Investor is another serial retweeter, and happens to be really smart with money. He recently shared How to Know if You’re Saving Enough. My recommendation challenge to physicians is to live on half.

Elva, sister of the late Amanda Liu, MD of Dr. Wise Money, recently shared some news I was happy to hear in a brief post simply titled Dear Readers.

I love springtime and the mercury topped 70°  yesterday for the first time in over five months. We marked the occasion in the way we celebrate many fine evenings — with a campfire, marshmallows, good beer, and good people to take it all in with us.

In addition to the grass greening, the trees budding, and the morels and ramp sprouting, this is also the time of year that Medscape releases its annual Physician Compensation Report. Thank you to Future Proof MD for alerting me to its release.

The report is behind a “login wall,” so I’ll give you some of the highlights and insights that I garnered from a perusal of the 43 slide report.

The results come from a survey voluntarily filled out by 19,270 physicians. I participated for the first time this year. I thought I should contribute, given that I’ve used the data in a previous post on the salaries of different specialties.

Although it may not be the most comprehensive data, it is available for free, and it tends to look more realistic than some of the salaries reported in the national media, which are often adjusted downward to account for a “typical” 40-hour workweek (a what now?).

Here are some factoids and insights from the report:

It’s interesting to see the results in the last two bullet points, as they are drastically different than the data presented in Mescape’s 2016 survey. I would guess the questions were asked differently, because I don’t think there’s been a sea change in medicine that would explain this newfound happiness. Here are last year’s career satisfaction results. 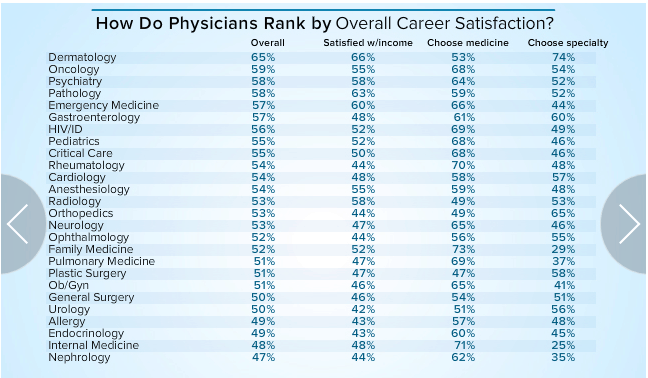 Readers, are you satisfied with your career? Would you choose the same career path if you were given a do-over?