I don’t know too many people that would give up $400k in annual income, regardless of the source. Jeff Rose, however did exactly that with what he considered to be passive income. Why I Gave Up $400,000 of “Passive” Income from Good Financial Cents. I added the quotation marks because no one in their right mind would do this if it were truly passive, although it does appear he didn’t have to work too hard for it anymore.

He’s not the only one leaving money on the table. Dr. Matt Poyner of Dividend Strategy and Big Family Small World left medicine and picked up woodworking, among other things. I took a 90% pay cut and I couldn’t be happier.

While southern states seem to be where the action is in real estate, 3 of this year’s top 10 markets happen to be in northern climates. The Best Places to Invest in 2022 from Crowdstreet. Did your hometown make the list?

Owning real estate can be lucrative, but it can also be a headache, especially if you’re managing every unit personally. Passive Income MD shares 5 Reasons Why You Should Not Self-Manage Your Rental Properties.

This detailed overview from Dr. Ben White could be alternatively titled 5 Reasons Why You Should Not Sell Out Your Practice. The Private Equity Model in Medicine is Flawed.

Real estate can make you a millionaire, and so can acquiescing to a leveraged buyout (the old term for a private equity acquisition), but it won’t make you a billionaire. Investing Doc highlights a handful of  billionaire doctors and 9-figure physicians in A List Of Doctors With The Highest Net Worth.

But are they happy? The Female Money Doctor digs into an age-old question. Does Money Buy Happiness?

A different Ben went to great lengths to answer that same question, sampling the most expensive things and experiences that money can buy. What did he conclude? The Curious Splurges of Benjamin Wallace.

Let’s continue Stacking Benjamins, shall we? Ben Carlson with A Wealth of Common Sense seeks an answer to a question that’s been on his mind, turning to chart after chart, as he does best. Is the Fed Responsible for an 800% Gain in the Stock Market?

Can’t you hear? Can’t you hear the thunder? You better run. You better take cover. FIRE Crossroads 017: A Coast FI Physician from the Land Down Under. Apparently, Australian physicians grapple with many of the same issues as those of us in North America.

The Aussie Doc Freedom fighter above details how she got to where she is today after getting off to a rough start financially. My 5 Year Plan Complete: Financial Progress Since 2017.

What can a VA do for you? Dr. Peter Kim isn’t talking about the Veterans Administration. He’s talking about services that both Passive Income MD and I use. 6 Steps to Hire A Virtual Assistant & Why You Should.

After a brief hiatus at the end of 2021, The Physician Philosopher Podcast is back! TPP #62: The Self Determined Physician (Burned Out to BadA$$). But wait… there’s more! Dr. Turner will be hosting a free 2-part live CME Event this week, on January 25th and 27th at 8 pm EST.

During this event, he will discuss the tools that Self-Determined Physicians use to create the time and money they need to create their dream job without leaving medicine.

On Day 2, he will talk about How Self Determined Physicians Create The Time and Money To Say Hell Yes to what matters most so that you can do it, too. After attending this event live, you will have the opportunity to snag 2 FREE APA Category 1 CME credits.

Rise of the Self-Determened Physician

Sicilian for a Week

Our adventures continue as we left Malta on Sunday to spend a week in Sicily’s second largest city, Catania.

We’ve been staying right in the heart of the city, minutes away from the main piazza (plaza), several gorgeous cathedrals, and easy walking distance from the 13th century Castle Ursino and the grand cathedral and monastery that is now part of a university, Monastero dei Benedettini di San Nicolò l’Arena, all of which we toured this week.

We also took a walk to the beach, even though it’s not exactly beach weather, and we got together with some friends of friends who used to live in the town we now call home. We actually bought a bookcase from them off of Facebook Marketplace when they were purging all of their belongings, not knowing their story or the fact that we’d be having dinner with them in Sicily 9 months later!

One of the things I honestly look forward to in any new city is checking out the local supermarkets. Lidl seems to be just about everywhere in Europe, and I’m a fan of the place. It’s pretty similar to Aldi, another European stalwart. Aldi is obviously quite common in the U.S. (we’re supposedly getting one in Alpena, MI) and there are some Lidl locations in the Eastern U.S. now. Their donuts are especially delicious.

The Lidl stores are pretty far from our lodgings here in Sicily, but we found a pretty decent store downtown called Penny. Apparently, they have 365 locations in Italy and over 2,000 to the north in Germany. We do like to eat some meals out, but it’s nice to have a place to grab snacks, lunch meats, bread and other baked goods, ice cream treats, etc… They can also be convenient for fruits and veggies, but street markets or dedicated produce stores often have higher quality and lower prices.

We went out for pizza the other night, and given that the prices started at €6.50, I figured these would probably be 8 to 10 inch pies. We ordered three. The waiter delivered three 18 inch pizzas. 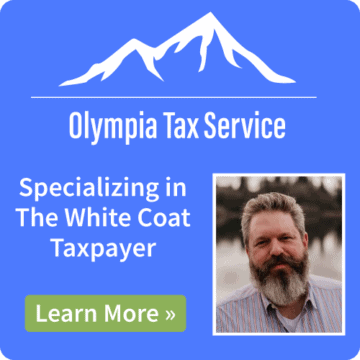 At Olympia Tax Service we specialize in advising the white coat taxpayer. Our focus is on tax planning for 1099 workers and micro-practices with one to three owners. This allows us to maximize your short and long-term tax savings.

Need a tax compliance package for your S-Corporation? We can do it all or give you the tools to do it yourself. Whether you’re looking for ways to pay less on your student loans, build passive income, or are already thinking about early retirement, Olympia Tax Service is here to guide your financial journey.