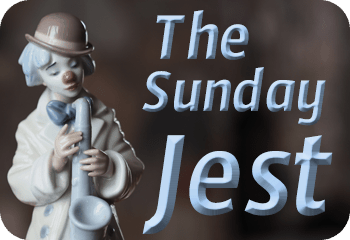 The Sunday Jest is a collection of terrible articles I’ve curated for your reading displeasure.

The Finance Stoic interviews a Roman Emperor from the second century. The two discuss early retirement, meditation, and the concept of stoicism, or as I like to call it, pointless self-denial and intentional suffering. Marcus Aurelius on FIRE.

The pass-thru deduction on qualified business income sure has simplified the tax code! I look forward to deducting the lesser of 20% of my QBI or 50% of W-2 wages paid by the business as long as it’s not a specified service business and my taxable income remains under $315,000. Or something like that. Even the White Coat Investor had to backpedal when his recent post, What You Need To Know About the Pass-Through Income Deduction, contained some misinformation. You can almost feel him squirming in the comments section. He promptly updated the post, so now things are perfectly clear and totally straightforward.

I once had a hankering for minimalism, and then I realized that meant getting rid most of my stuff and I’ve got neither time nor the inclination to do that.  I was excited to see Joshua Becker at Becoming Minimalist discuss feasting, though. Today being Easter, I’ll be feverishly feasting on ham, potatoes, and Cadbury Eggs. The Value of Fasting (from Anything). And How to Get Started. Wait… I think he missed an “e.”

Why learn about complicated topics like what stocks and bonds are and what expense ratios have to do with anything when you can invest in a Target Date Fund to match your expected retirement date at age 67? Adam of minafi (which sounds minimalist — wonder if he’s into feasting, too) takes some ridiculous extra steps to accomplish the same thing, explaining How I Reverse Engineer Target Retirement Date Funds to Lower My Fees.

What does financial independence have to do with rectangles and snails? Absolutely nothing! But that didn’t stop the Wealthy Doc from writing about them when discussing savings rates in Become Financially Independent Using the Golden Mean. At least he used the word “mean.” Might be my favorite word, and the only sensible one in the whole post.

Dog G, the internist at DiverseFI who makes a lot more money than I ever have (not sarcasm this time, folks — see here) has a question. What if Your Calling Doesn’t Make You Happy? I have an answer. You probably responded to destiny’s butt-dial. Pick up the phone and try again.

Earlier this week, I opened up and overshared about my past, present, and future in the name of transparency. Copycat Steve from Think Save Retire (surprised he doesn’t call his blog TSR on FIRE) went ahead and did pretty much the exact same thing but in a more clever Q&A format. The Ultimate Early Retirement FAQ – Income, Net Worth, Monetization and More. Wait, he published his first? Drat. I hate that guy.

Steveark, the engineer who retired to a non-retired life of consulting and commenting on blog posts, now has a blog of his own. He poses a silly question. Will Early Retirement Kill You? Probably not, but if you don’t stop asking absurd questions, I know someone who might!

Are you suffering from a severe case of Early Retirement Envy? Tired of reading inspiring posts leaving you yearning for the good life? Joe @ Retire by 40 has the cure. Check out his mundane post-FIRE existence in the fantastically uninspiring article titled My Unglamorous Early Retirement Lifestyle.

Have you ever escaped a fire, grabbing camping gear and dog food but not the safe full of life’s most important documents sitting right there next to that other stuff? EJ at Dads Dollars Debts has. And so he had to learn How to Retrieve All of Your Vital Documents. Step 1: Don’t subject them to a blazing inferno.

Just when you’re starting to feel good about paying down your student loan debt and achieving a positive net worth, SLESI Money parades a cast of wealthy characters around, bragging about how much richer they are than you. Like this jerk, for example. Let’s see what five more out-of-touch millionaires have to say about how awesome their lives are compared to yours!

I mean that. For real!

I’m not going to lie. Writing The Sunday Jest was a lot more fun than the usual Sunday Best post. Would it be a terrible thing if we just changed the format permanently to an ornery tongue-in-cheek weekly roundup?

It’s not very often that Easter coincides with April Fool’s Day. I’ve been looking forward to this one for a while now, as evidenced by my Twitter feed. 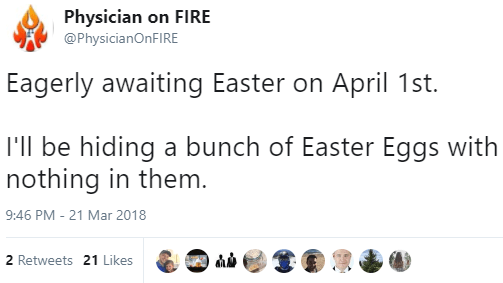 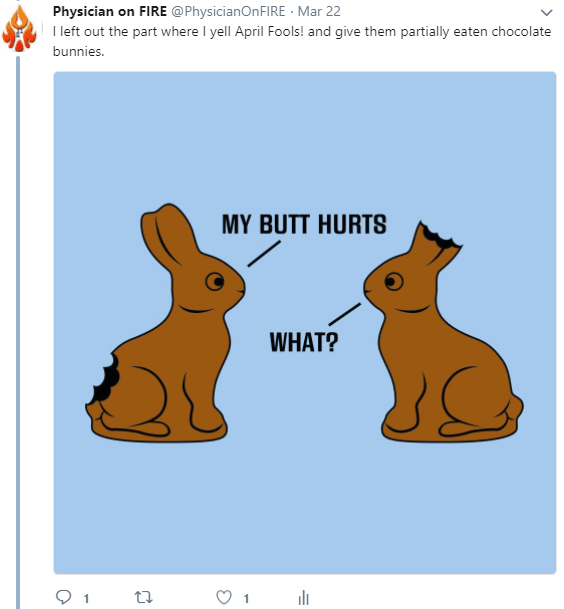 Have a snarky week!