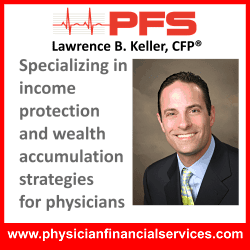 Have you ever seen the John Cusack film, “High Fidelity

“? No? That’s OK, you don’t really have to see the movie to understand and appreciate the concept of a Top 5 list.

Cusack’s character, Rob, is a big fan of them; so am I. David Letterman had his Top 10 lists, but half the list was nonsense and the lame answers distracted you from laughing at the 4 or 5 funny ones. So I’m taking Rob’s approach. My top 5 reasons to retire early are:

1. Retire Early Because You Can

If you live below your means, save and invest along the way, and avoid financial catastrophe, there’s a good chance you’ll be able to retire early. It sounds simple because it is. Don’t be a big spender; avoid huge debts. Stay married (or stay single if you like), avoid super risky investments, and don’t try to keep up with the Dr. Joneses.

10 to 20 years of a physician’s salary should position you nicely for an early retirement. Of course, you can continue working long after you’ve achieved financial independence. It’s your life. I tend to enjoy my vacation weeks more than my workweeks, but that’s just me. So retire early, because you can!

2. Retire Early For Your Health

I like to exercise, or at least I like to say that I like to exercise. I’ll train for a race and run for a few months. I’ll start feeling soft and go back to some strength training. My buddies sign up for another crazy muddy obstacle course at the ski hill – OK, I’m in (reluctantly).

But when life gets busy, and my life does get busy, exercise is usually the first thing to go. If I didn’t have a day job (and occasional night job), I would have a lot more time to exercise. I’m not promising I would do it, but I would be fresh out of excuses not to.

Speaking of fresh, there would be more time to prepare healthy meals with fresh ingredients. And time to enjoy the fresh air, biking and walking places instead of driving everywhere. Living healthier can extend your living years and your healthy years.

Retiring early will give you so much more time to enjoy them before you’re too arthritic or suffering from scarier ailments. If your job is the greatest source of stress in your life (it is for me), eliminating that stressor can do wonders for your mental health. Retire early, for your health!

I have 2 boys, ages 6 & 8 (in 2017). Every night at dinner (when I’m home for dinner), we talk about our favorite part of the day. Without fail, the boys will point to a part of the day where they got to do whatever they wanted to do. Recess! Lego time after school! Some days, it might even be Reading! But it’s reading a book of their choice on their own time.

I don’t think my answers were much different when I was their age, and I don’t think I’ve matured all that much since then. My favorite part of the day almost always happens outside of work. It’s pushing the boys on the rope swing, jogging on the bike path, biking on the jogging path, beers in the hot tub, that sort of thing.

Take a few minutes and imagine all the things you might do if you had more time. Learn a language? Volunteer? Travel in a less hurried way? Read more? There are many ways to improve your life and improve yourself, but they all require free time.

I’ve heard that when you’re retired, every day is a Saturday. That sounds fantastic. Retire early, for the free time!

4. Retire Early for Your Family

Physicians work lousy hours. Not all of them, but in most situations, it’s unavoidable. Personally, I’m an anesthesiologist. The workday starts around 0600, when the boys are sleeping. When I’m on call (about 73 days a year, but who’s counting), I don’t expect to home for dinner. I’m happy when I’m home for bedtime – and that’s my bedtime, forget about the kids’ bedtime.

In the summer, my wife likes to spend a lot of time at our second home*, a cozy little cabin on a lake. Our second home used to be 9 miles away from our primary home, but now it’s over 500 miles away. So… not exactly a weekend drive. I can expect not to see the family for at least a few weeks every summer. Because I am working a job. 500 miles away.

When the boys are teenagers, I expect they’ll be involved in some extracurricular activities. Athletics, music, maybe debate or chess club. Whatever it is, it’ll be happening in the evenings and on weekends, and I’m going to want to be there. Coordinating schedules with my partners and their obligations, working around my boys’ 2 schedules sounds like a nightmare. I’ve come up with a solution. You’ll never guess… oh wait, you did. That’s right. Retire early, for your family!

5. Retire Early to Reduce Your Liability

[knocks on walnut desk] I have never been involved in a malpractice lawsuit.** I would really, really like to keep it that way. I treat patients and their families with respect. I use evidence-based practices. I stay current with the literature. I’m willing to say “I’m sorry” if the situation calls for it.

The fact remains that bad things can happen to our patients despite our best efforts. I don’t approach each patient as though they are a potential lawsuit, because that would be a terrible way to live. The job is stressful enough without that dark thundercloud overhead.

Nevertheless, it is a fact that any surgical patient could have a complication, and a complication could result in a lawsuit. It is also true that when you stop treating patients, you stop adding encounters that could ultimately result in a malpractice suit. I’ve heard those nasty things can drag on for years and be absolutely miserable. I want nothing to do with that [knocks desk one more time]. For your sanity, reduce your liability by retiring early!

*Yeah, yeah, I know owning a second home is entirely inconsistent with the usual way of thinking among the frugal early retiree crowd. The Bogleheads would politely ask me to reconsider the extravagance, while Mr. Money Mustache would straight up punch my face and ask questions later.

Well, if he had asked, I would have told him that I bought it at auction. It cost me less than the used Chrysler minivan I bought later that summer. I did eventually spend more to fix up the place, but the total cost of my now renovated second home and my primary home is a bit less than one year’s gross salary. So back off!

**I have not been sued for malpractice, but I have, however, been sued as a result of being a physician willing to volunteer on the Hospital Board. That drama dragged on for three and a half years, and was a driving force behind my inclination to leave medicine behind.

Do any of these reasons speak to you?  Got a #6 you care to share? Find the comment box below!