There is no shortage of financial advice out there. You are undoubtedly exposed to a wide range of money headlines and adages that may or may not be helpful.

They can be found in books, magazines, newspapers, social media, news feeds, and blogs. If you’re more of an audiovisual person, television, podcasts, and Youtube will also tell you what you should be doing with your money.

Some of these recommendations are excellent and more or less universal. “Spend less than you earn.”

Other advice is generally good, but may not apply to everyone. “Invest in real estate.”

Some of it is just bad and borderline criminal. “Invest your emergency fund in an interest-bearing “stablecoin” account.” 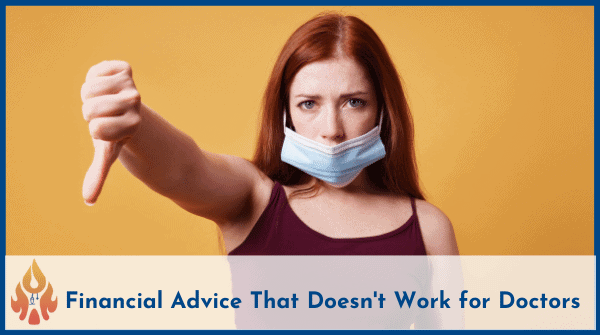 Why has there been a proliferation of financial advice aimed specifically at physicians?

One sad truth is that we need it. Stanley and Danko singled out physicians as notorious under-accumulators of wealth based on their research for The Millionaire Next Door.

That’s not the primary reason, though. That fact indicates that we doctors need to improve our financial knowledge and implementation of sound strategies.

When our friends are ramping up their careers, we’re racking up debt in medical school.

When our friends are getting promotions and bumps in pay, we’re busting butt in residency and fellowship for little more than minimum wage when you factor in the long, long hours.

When we finally catch up to the carrot at then end of the stick and get a real doctor job, our salary can go up five-to-tenfold overnight.

Career advancement is less profound as compared to most other professions. In many medical specialties, an early-career physician can earn just as much as a colleague with decades of experience. Particularly in employed models, the hierarchy among physicians often looks more horizontal than vertical, at least in terms of pay.

All this to say that common financial advice that probably works for most people may not make any sense at all for you as a physician. Here is some conventional wisdom that can be tossed out the window as a doctor.

Net Worth Targets by Age

Here are some guidelines from Budgets are Sexy:

At 25, most future physicians are in medical school earning no salary.

At 35, there haven’t been enough working years to bank up twice one’s salary, especially when you enter higher tax brackets while paying back student loans.

By 65, I honestly hope you’ve got more than 8x your salary saved. If you’ve been listening to me, you will have been FI for a decade or two by then!

Here’s another set of savings goals for the “above average person” from Financial Samurai:

Since we’re not making any money at age 22 and nothing much at 29, any savings goals for age 30 and under are meaningless. A net worth of zero at 30 is an accomplishment for a physician, and it usually requires family help or an early start to medical education combined with a short residency.

The mid-to-late 30s is where we make up for lost time, and I’d say that the net worth targets at age 40 and up are on the low side for physicians. I’d like you all to be millionaires before 45, and it’s absolutely achievable.

Don’t worry about what your friends have or what a table says you should have. Make your own goals based on your age, debt load, and salary, and do what you can to achieve them on your own timeline.

Retirement Calculators Based on Salary

You may have heard that you’ll need to replace 70% or 80% of your pre-retirement income to have a comfortable retirement. This frequently referenced guideline makes sense if and only if your spending is perfectly coupled with your income.

If you’re setting aside a small amount for retirement and spending the rest, living more or less paycheck-to-paycheck after paying yourself first, then you will need to replace most of your salary to maintain that standard of living. You won’t need 100% because you won’t be setting money aside for the retirement you’re living, and you’ll have a better tax situation as a retiree than as a working bee.

J.P. Morgan correctly recognizes the trend that those with higher salaries will need to replace a lower percentage of their incomes in retirement, but they still say that a $300,000 a year household will need 72% of that in retirement.

However, I strongly encourage everyone, especially those with a physician’s salary, to completely decouple their spending habits from their incomes. Do that, and you may be in a position to replace less than half of your pre-retirement income after you leave the workforce.

If we start with a default of 80%, our hopes of an early retirement are dashed completely. We’re barely halfway to our retirement goals at age 50. 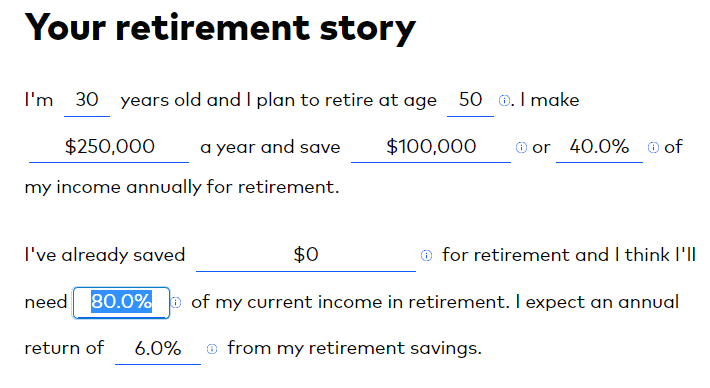 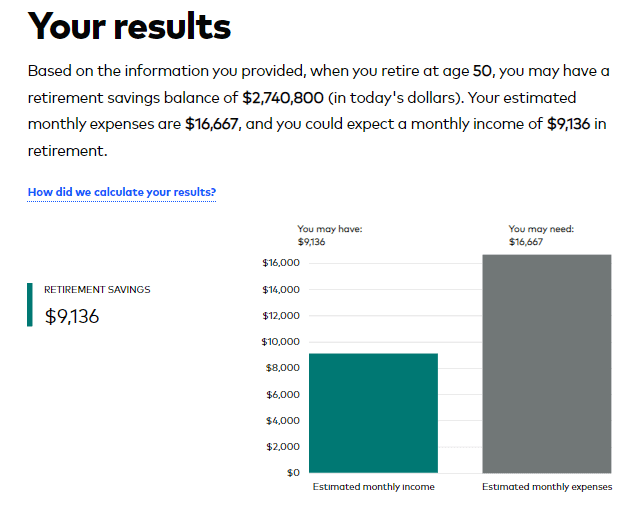 However, if we feel we can get by on $100,000 a year, which represents 40% of our gross income, the picture becomes much rosier. 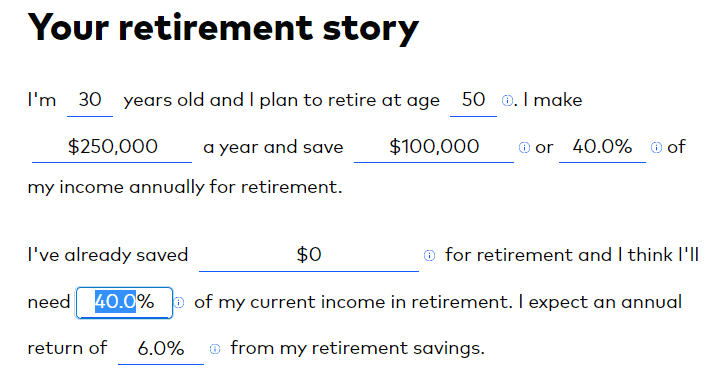 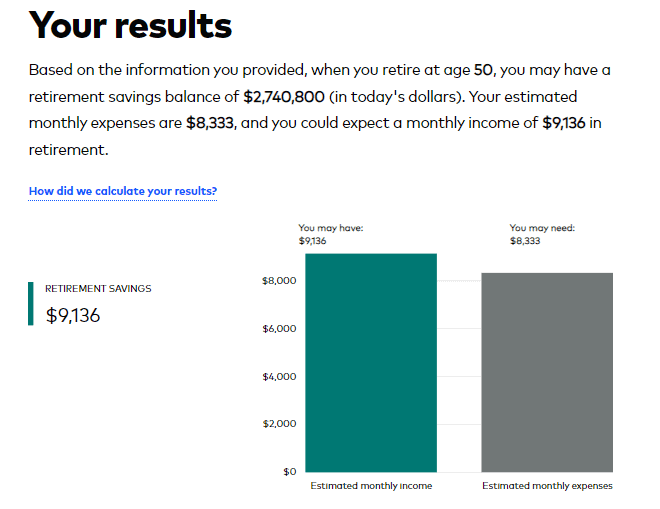 Any retirement calculator that says you need to replace a high percentage of your working years’ income is lacking the flexibility that someone with a high income needs.

For more information on how to best calculate your FI number while incorporating cashflowing assets, see How Much Money Does a Doctor Need to Retire?

Setting aside 10% to 15% of your income may be adequate for a person who can work for 40 years and still retire in her early 60s, but that’s not you. You should be saving more.

My recommendation to those interested in early financial independence is to aim for a net savings rate of 50%. Strive to live on half of your takehome pay, and use the rest to pay down debt and invest. Do that and you’ll be FI in about 15 to 20 years, assuming you start with nothing.

If that’s not feasible due to a low salary or high cost of living, at least do what the White Coat Investor recommends and save 20% or more of your gross (pre-tax) salary for retirement. That might not get you an early retirement, but it should provide for a comfortable, on-time retirement.

Now, there’s nothing wrong with thrift, and we’ve developed plenty of frugal habits that helped contribute to our early financial freedom.

That said, when you earn multiple six figures per year, saving $5 here and $10 there isn’t going to make a meaningful difference in your financial well-being. The Latte Factor was written for people with a lot less disposable income than you. If your preference is for Folgers brewed at home, you will definitely save some money, but a few dollars a day on fancy coffee, tea, or kombucha isn’t going to break the bank. Nor is a $6 or $8 glass of wine or pint of beer.

While a few dollars is no big deal, a few hundred thousand dollars is a very big deal, especially when you’re young and you choose to spend that money rather than let it compound for decades into a seven figure sum.

The biggest discretionary spending categories for most people are housing, transportation, food, and travel. With a physician-like salary, you can afford to splurge in one or two of these areas, but not all four. Figure out what truly floats your boat (and that may be an actual floating boat, a 5th category), and try to spend reasonably in other areas.

The diamond industry has some slick marketers. How they got this audacious rule of thumb out there is beyond me, but it’s ludicrous, especially for a physician.

The only exception I could make is for a medical student earning nothing. If you happen to have had a ring handed down from previous generations, and it didn’t cost you a thing, go ahead and propose with that $0 ring if you think your soulmate would approve.

As a resident or fellow, three months’ salary looks something like a $15,000 ring. Do yourselves a favor and max out two Roth IRAs and put the other $3,000 towards a ring. You can obviously spend less than that, but again, as a physician, you don’t have to be overly frugal if you don’t want to be.

Personally, I spent about three weeks’ salary as a resident on an engagement ring. My wife still loves her 0.62 carat square Asscher cut diamond, and yes, I started and funded her first Roth IRA right after we got engaged.

You Need a Side Hustle

Don’t get me wrong; I think side hustles can be stupendous. They can be great outlets for creativity and give us an opportunity to pursue passions either within or entirely outside of medicine.

This website started as a side gig when I was a full-time anesthesiologist, and it didn’t become my sole gig for another three and a half years.

Most side gigs will never pay $100 to $300 an hour, but most doctor jobs do. It’s rare for a side gig to become as lucrative as the main gig when you’re a physician. So, unless you’re financially independent, don’t quit your day job. It pays well and you probably don’t have a ton of free time to devote to other money-making endeavors.

Now, a side hustle can be rewarding in numerous non-financial ways, and it’s always beneficial to learn new skills and expand our capabilities. Just understand that it’s possible to reach all of your financial goals with one good career. That’s how most doctors do it.

Our friend Passive Income MD feels that creating additional income streams outside of medicine is non-optional, but that doesn’t necessarily mean that you need a second job. Passive income streams can get the job done.

What other financial advice do you hear that makes no sense for physicians? Please share in the comment box below.