Nobody’s perfect, especially when it comes to managing money. I have yet to meet someone who’s never made a financial mistake.

I’ve made my share of mistakes, but fortunately I learned from them and recovered early on. I’m not the first or last physician to make a financial blunder.

In fact, given how much time and effort doctors put into their medical education, it’s equally surprising and sad how little effort often goes into understanding basic personal finance and money management matters.

Dr. Jim Dahle has studied the financial mistakes of doctors and narrowed them down to seven categories. This post was originally published on The White Coat Investor.

7 Financial Mistakes Doctors Make (And How to Avoid Them)

The more I learn about doctors and their finances and the more I talk to other docs, the more I see several recurring themes that cause them to have difficulty reaching financial success.  This post explores these themes. 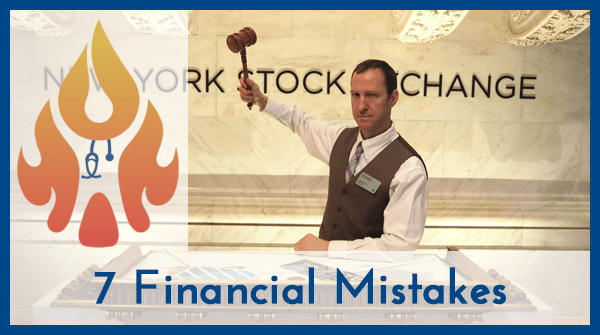 This one begins early for most medical students as they get into the habit of living beyond their means.  Student loans, car loans, credit card loans, vacation loans, and poorly designed mortgages.

It isn’t just that the doc lives beyond her means (although we’ll get to that next), but she is simply paying too much interest causing a major drag on her finances.

Living within your means is very important.  But to be truly successful, you need to live sufficiently far below your means that you can carve out money to invest, pay down debt, and build net worth.

Saving 10% is the general rule for most people (although even that might be a little low given our current low-expected-return investing environment), but most people also have 40 years to save for retirement.

Doctors only get 30 years, so they really need to be saving 15% if they plan to retire at 65.  If you want to retire early, better bump that up to 20-25%.  Remember that isn’t counting saving for your next car, that boat, a house downpayment, or your kid’s college fund.

What keeps doctors from saving more?  Debt is a big factor, as is a sense of entitlement after years in training and many long hours at work.

But a major factor is the expectation in your own mind (and the mind of family and neighbors) that you need to live like a doctor.  In short, you spend too much.  Quit it.  Like quitting smoking, it’s simple, but not easy.

Doctors are well-known to make all kinds of stupid investments just to lower their tax bill.  Yet far too many don’t take advantage of the simple tax shelters available to them.  Why some doctors have investments outside their 401Ks and IRAs when they’re not maxing those out is beyond me.

I’m always surprised how few doctors have heard about Backdoor Roth IRAs or Stealth IRAs.  For most doctors, every dollar they put into a retirement plan saves them ~40 cents in taxes.  Some self-employed physicians don’t even open the right kind of retirement plan, severely limiting their contribution amounts.

Most doctors are smart enough to either learn about the tax code and do their taxes themselves or hire a good accountant to do the job.  But finding a few bucks here and there at tax time is missing the forest for the trees.  The big gains are found in changing your tax behavior throughout the year.

Starting over is expensive.  There is nothing a doctor can do that will impact his finances as much as a divorce.  It isn’t unusual for a doctor to lose his home, a large chunk of his savings, and his future income stream (to alimony and child support).  It is hard to recover from that.  The old adage, “One House, One Spouse” is still applicable.

You can protect yourself from this in several ways.  You can avoid marriage altogether, you can have a prenup or postnup agreement (especially if on a second marriage or if marrying after acquiring significant assets or after becoming well-established in your career), and you can live your life to make your marriage relationship a priority.

You can also marry a doctor.  Physicians as a whole have a 24% divorce rate (higher among female physicians) but dual physician couples have only an 11% divorce rate.

Professional divorce is also expensive.  Breaking up with your partners, closing a practice, moving to another town, etc… are all expensive.

You may have moving expenses, buy-out fees, employee costs, malpractice tails, and a temporarily lower income.  Go into any business relationship with your eyes wide open, and have your contracts reviewed by an experienced health care contract attorney.

Not only do most people (doctors included) not have enough of the types of insurance they really need (primarily life, disability, and liability -professional and personal), they have too much of the types they don’t need.  A quick reminder:

In investing, you get what you don’t pay for.  Many doctors pay 1-2% a year or more for investing advice, mutual fund fees or loads, commissions, or other costs.  The difference 2% a year can make in an investor’s final net worth is astounding.

Consider two physicians, both of whom invest $50,000 a year in similar investments.  The first, however, minimizes her investment costs while the second accrues an additional 2% a year in costs.

For a million bucks, I think you can spend a little time learning about investing, hiring an advisor who offers good advice at a reasonable price, and analyzing the true costs of your investments.  If you add on another 30 years in retirement, the numbers get even worse.

I’m not talking about buying treasuries or getting involved in Peer-2-Peer Lending.  I’m talking about family and friends.  If you’ve read through the Stupid Doctor Tricks post, you can see dozens of examples of people who loaned tens of thousands of dollars to parents, siblings, kids, and friends.  You’re “the rich doctor” so they come to you.

Well, I’ve got news for you.  You’re not rich.  You can afford to help others out, but in general, make the money you hand to friends and family a gift, with no strings attached.

This will do two things for you.  First, it will preserve the relationship.  A lender-debtor relationship is different than a family relationship, especially when the debtor goes into default.

Second, it will preserve your money.  Most of us are willing to lend much more money than we’re willing to give.  It’s far better to give away $10K than to lose $100K in loans.

What was your biggest financial mistake?