I’ve tried to make it as clear as possible in the title. I’m donating money. You’re choosing the charities. It’s that simple.

This is the third consecutive year that I’ve shown gratitude to my readers and sponsors by donating to charities you all select.

2020 has been a tough year, and many are in need. I’m upping the ante by doing what we did last year and adding a $10,000 grant to an organization that is going to make the world a better, safer place in 2021.

The first two attempts at this drew an underwhelming response. That first year, the apathy was palpable. It took all morning, afternoon, and evening to get 72 readers to make a recommendation.

Last year, we had a number of repeat requests from readers who realized what I was offering, and we had 100 requests before noon eastern time.

That was a big improvement, but still, only about 5% of my email subscribers bothered to click through to read the post, which is 1/3 to 1/4 the click-through rate of a typical post.

Hence, I tried to make it plain as day this year. I’m not asking for donations. I’m not matching them. I’m making them. I think I did a poor job of providing that clarity, at least in the title, in previous years. 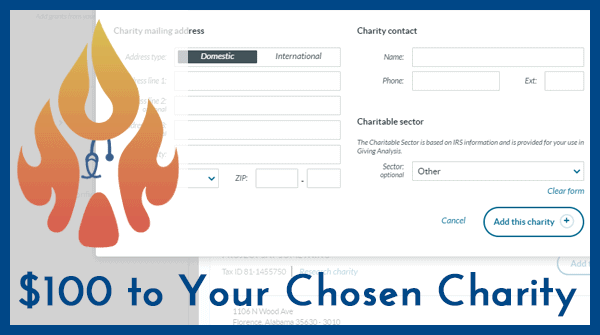 The timing of my retirement from medicine has been interesting. Within months, there was a novel coronavirus causing problems overseas, and a pandemic was declared seven months after I last stepped foot in an operating room.

I thought I might be called back into duty, and volunteered to step in if needed. With so many anesthesiologists idled as elective surgeries have were put on hold in the spring and again in the fall, my services have not been necessary. As it’s now been nearly 16 months since I’ve held a laryngoscope, I’m not sure I’d be the best person to step in at this point.

I’ve thought about other ways I can help.

A story about UNICEF’s plans to distribute 2 Billion doses of COVID-19 vaccine to impoverished nations popped up in my news feed.

It’s going to take a global effort to defeat the virus, and the world’s wealthiest nations have already spoken for many of the vaccine doses slated to be manufactured.

I’ll get my shot as soon as someone lets me, and I’d like to see others less fortunate have an opportunity to get theirs.
I have donated $10,000 to UNICEF to aid in these efforts.

This annual post is just one part of our charitable mission. I say “our” mission because it doesn’t happen without your support. These gifts are possible because you help make this a profitable site. I’m speaking to both my readers and my sponsors when I say  “you.”

In April, we gave $25,000 to charities helping with various forms of COVID-19 relief.

We also donate a dollar amount equal to the salary of a physician I’ve worked with at a free surgery center in Honduras via One World Surgery.

In the nearly five years that this site’s been around, we’ve donated a little more than half of my online profits. That first year, it was a high four-figure sum. In year two, it was a solid five figures. This year and last, it’s been a six-figure amount. After today, the grand total of money donated will be a touch over $400,000.

That’s quite an impact. Again, I thank you.

The IRS makes it difficult to donate half of your income, particularly when doing so in the most tax-efficient way when you have no other source of income. There is also talk of limiting the value of deductions for charitable giving from our President-elect who has personally donated a grand total of $3,690 to charity over the past decade.

As I’ve argued before (see myth #3), giving in a tax-efficient manner whenever possible puts the most money in the charity’s coffers for each dollar you part with. It’s the opposite of selfish; it’s getting the most selfless good for your dollar.

When I was working as an anesthesiologist, donating half of my online income was not an issue. Without that extra income source, it’s more difficult to commit to continuing to donate half or more of my online profits as I have in the past, but I will continue to have a charitable mission as long as I have this site (and well after, thanks to our donor advised fund).

Some of that $400,000 that we’ve given has been granted directly to charities, but we’ve also used this charitable mission to continue to grow a donor advised fund that we first established in 2013, before I knew what a blog was or that one could be profitable.

I’ve described the mini-foundation-like account and how we use it in great detail in other posts that I’ll link to below. I’ve heard from dozens of you who have started a donor advised fund (DAF) of your own. That’s awesome.

In short, it’s an account with a charitable organization. You donate money to it, and from there, it can only be granted to registered 501(c)(3) charities. Don’t worry, there are nearly two million eligible organizations that will gladly accept your DAF money.

You can donate appreciated mutual funds or other assets to the account. You decide how the account is invested. You also decide where the money gets donated and when, and you can make grants anonymously. When you make hundreds of grants as I have in recent years, this is a must! My mailbox would be overstuffed with pleas for more if not for the anonymous giving feature.

By building up a balance in our DAF, I not only have a ready source of money to donate whenever I want, but I can also treat it like an endowment of sorts, and I will be able to give from that account for a lifetime if I choose.

Charities Chosen by Our Sponsors

Companies and Individuals whom I’ve worked with over the past year were given the opportunity to select a recipient of a $100 grant.

These are their choices:

There are a few simple criteria.

Second, the charity must be a registered 501(c)(3) charitable organization. You can research them and find the exact name, Tax ID number, and address of such organizations on sites like Guidestar, Charity Navigator, Charity Watch, and Consumer Reports. I’ll be making the grants from Fidelity Charitable, which also has resources for selecting charities.

Third, please avoid political and religious organizations and associated gray areas. You’re welcome to support whomever you like, but I like to avoid anything that could be considered controversial with these grants.

Finally, consider supporting the charity you choose in another way if you are not already doing so. I know many of you nominate charities that you’re personally involved with, whether you’re donating your time, serving on its Board, or donating far more money yourself. I thank you for your efforts!

Please comment with the exact name of the charity. If you can find a link on Guidestar or Charity Navigator, please include that, too. Usually, that’s more than enough info as long as you know for a fact that it is indeed a 501(c)(3).

If you’re unable to find the charity in a search engine, this is the form I’ll be filling out. Please include the necessary info so that I can efficiently make the grant to your chosen charity. 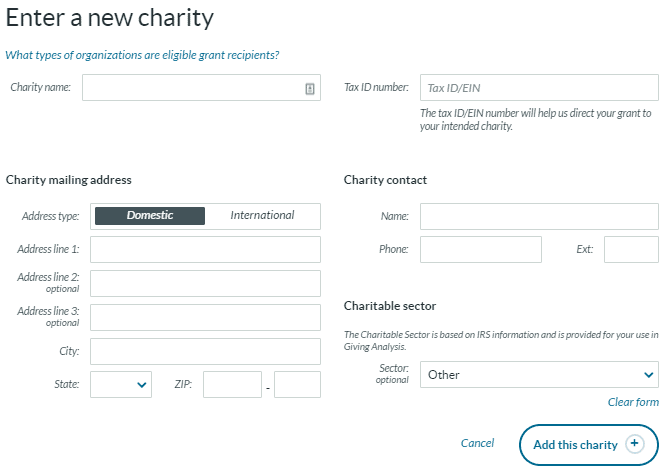 UPDATE: We have > 100 grant requests as of 0800 EST. Thank you all for the great recommendations!

UPDATE 2: The benevolent millionaire Vagabond MD has graciously offered to fulfill grant requests made by the final 20 commenters. When combined with the grants made to UNICEF, the first 108 commenters and 40 sponsors, the total impact of our gifts is nearly $26,000 across the nation and world!

In 2021, I promise to publish the post later in the day to give those in all time zones a fair shot.