This is not your typical FIRE blog, and I’m not an average FIRE blogger. Financial Independence was never a goal of mine; its presence in my life was a discovery. A few years ago, I learned of the concept, realized I already had enough to retire early, and have been grasping for good reasons not to retire ever since.

I’ve got a good job. I don’t love every aspect of the work I do, but it’s not a job I’ve been desperate to escape from. I know there are a number of things I expect to miss now that I have left my anesthesia career, and I’ve been putting that day off for a while now with a number of tactics that I believe will serve me well in the future.

I wasn’t going to retire before my fortieth birthday just because the numbers suggested I could. I figured I would need a few years to figure out if that’s what I really wanted to do with my life. I also had to figure out what I would do next.

Those questions have been answered. I’ve got a list of 50 things I’d like to do with more free time, and I’ll be transitioning to this non-clinical career of a personal finance blogger. Call it semi-retirement or whatever you like. Retired not Retired.

While sorting these things out, I employed three tactics to ensure I’d be work a while longer:

My History With Donor Advised Funds

I’ve been donating to a donor advised fund since 2013. It was a year in which I worked as a locum tenens doc with many of my weeks off. I also incurred substantial capital gains when I sold funds to buy a house.

I discovered Bogleheads and realized the funds I owned were suboptimal. Most of them were actively managed, and even the passive index fund I held had an expense ratio of 0.38%. T. Rowe Price, as recommended by Andrew Tobias, wasn’t necessarily a bad choice, but it wasn’t the best, either.

I wanted to jettison more of those mutual funds I was holding in a taxable account, and I found out I could do so by starting a donor advised fund with the T. Rowe Price Program for Charitable Giving. It sounded so sophisticated, and I learned that a sizable donation would keep me out of the top tax bracket and the new 20% capital gains bracket, so I signed on to The Program.

In 2014, I started loading up my taxable account with Vanguard’s passive index funds instead, but I still had some money in the active funds I had purchased years earlier. A review of my 2014 tax documents from T. Rowe Price convinced me that it was time to be done with those.

In early 2015, I opened a new donor advised fund (DAF) with Vanguard Charitable by donating those old T. Rowe Price funds to it. I also gifted the funds held in the T. Rowe Price DAF to the Vanguard DAF to take advantage of the lower fees in the new program.

In the fall of 2015, I logged in to Vanguard Charitable to start making our annual donations. That’s when I became familiar with the $500 minimum grant size that Vanguard has set. At that point, I finally did what I should have done back in 2013 and I researched my options, comparing and contrasting different DAFs.

I learned that both Schwab Charitable and Fidelity Charitable not only have lower minimum donations to open an account ($5,000 versus Vanguard’s $25,000), but they also allow you to give grants of $50 and up, which is a much lower floor than Vanguard’s $500.

If I were to open one and only one today, I would choose Fidelity. Schwab appears to be quite similar; I’m just not as familiar with it, and Fidelity’s website is very intuitive and easy to use.

To get the maximum number of dollars into a DAF, you want to donate when it costs you the least. That will be when you have income that puts you in the highest tax bracket you ever expect to be in. For me, that was in my final years of clinical work.

In 2016, our DAFs were approaching six figures, and we more than doubled that with a one-time $100,000  donation. I went into detail as to how I chose the mutual funds with the largest percentage gain to make that donation optimally in this post.

Vanguard Charitable gives you a number of options for contributing to your DAF, including donating assets held at Vanguard, which is what I choose to do.

As I learned last year, you cannot select particular lots to sell when doing this online, even if you have Specific ID as your chosen cost basis in the taxable account. You can donate specific lots with a phone call or letter of instruction, but the default when donating is FIFO, or in other words, the oldest lots will be donated first. 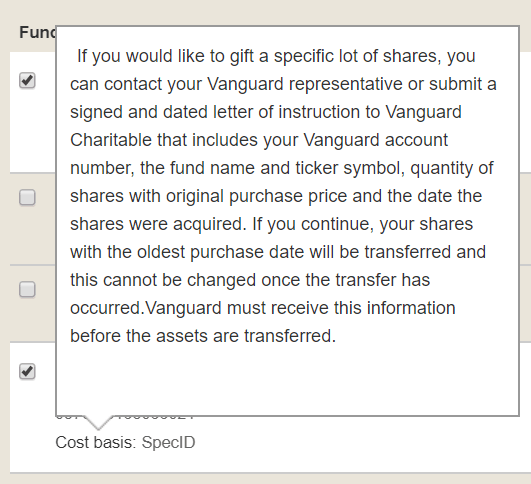 This year, the oldest lots I still held happened to be the lots with the most gains, so I was able to set up the donation in five or ten minutes online.

Once you have chosen the funds to donate, you will be presented with all the available investment options. Vanguard Charitable offers five multi-fund options and eight individual fund options. You can invest in a percentage of any or all of these.

I like to keep things simple and can obviously tolerate volatility and loss in hopes of having a higher long-term return. I keep 100% of my DAF money invested aggressively in the 100% stock Total Equity Fund. It consists of 55% S&P 500, 15% extended US market, and 30% total international market, with an expense ratio of 0.07%.

Another click or two, and you’ve got yourself a confirmation.

Note that Vanguard has a minimum of $5,000 for additional contributions to their DAF. With Schwab, it is $500.

Any time I see a blog post or forum thread on the subject, I read with great interest. A few comments come up repeatedly as reasons to delay or avoid opening or contributing to a donor advised fund, and I’d like to address them here.

Myth #1: The fees negate the benefits.

It is true that the popular DAFs have similar fees of about 0.6% per year plus the expense ratios of the funds you choose. It’s also true that if you’re in a financial position to open a DAF, you’re presumably choosing between putting money in a DAF or keeping in invested in a taxable brokerage account.

I do my best to invest in a reasonably tax-efficient manner in my taxable account, but it still sees a tax drag of nearly 0.6% per year. I’m not a fan of receiving dividends in a taxable account, and the roughly 2% dividend I do receive is subject to the 15% tax on qualified dividends, the 3.8% NIIT, and a 9.85% state income tax.

In other words, at least for the time being, the fee drag in the DAF is very similar to the tax drag that same money would see in my taxable account.

This will change after retirement when I drop into lower tax brackets, but there are other benefits that make the low fees worthwhile. Among them is the ease of making grants from the DAF and the elimination of a need to keep track and collect receipts from our year-end giving.

Myth #2: The longer you wait to donate, the better the deduction you’ll get.

There is some truth to this, but the math shows it doesn’t really make any difference. For example:

Years later, when the market has doubled, you have $200 in the DAF and $90 in your taxable account. (Ignoring the 0.6% in tax drag / fees which you would have if you give now or wait to give later).

If you wait all those years to donate until that original $100 in the taxable account has doubled, you will put $200 in the DAF and get $90 back.

So there’s really no benefit to waiting if you plan to give eventually, anyway, unless you plan to be in a higher tax bracket later in life. In that case, you should wait until you’re in the highest bracket you expect to be in to start a donor advised fund. Conversely, if you expect to be in lower tax brackets in the future, there’s no time like the present to fully fund a DAF.

Reading through some of the rationale I used to open and contribute to these DAFs, I can see how one could start to think this way. However, giving a dollar to get 45 cents back is not going to get you ahead financially.

A better way to look at any tax-advantaged giving, whether via a DAF or not, is to look at it as the charity receiving the most money for every dollar you choose to part with.

If you give $100 away without itemizing deductions or using a DAF, the charity receives exactly $100.

I’ll be honest — if there weren’t significant tax advantages to donating, I’d be less inclined to be generous. As it is, most days I would rather give my chosen charity a dollar than pay another 45 cents in taxes, and it appears a lot of other people feel the same way as me. As of 2018, there were nearly 463,000 DAF accounts holding over 110 Billion dollars.

Are we Done Donating to Donor Advised Funds?

My goal was to grow our DAFs to a quarter million dollars prior to retiring, and that goal has been met.

However, that doesn’t mean we are completely done giving. I have made a pledge to donate much of my site’s profits to charity, and I’ve now donated about $140,000 since making that pledge. Before the end of 2019, I plan to make another six-figure donation.

With a $1 Million DAF, we could comfortably give $40,000 a year, and probably more. I’m not saying I expect that to happen, but a man can dream, can’t he?

As time goes on, we’ll probably give in excess of the 4% rule, but if we do end up with money left in the accounts, we have designated our boys as successors to each control half of the remaining funds.

I know a number of other bloggers who have established donor advised funds and written about them. If I missed you, please let me know in the comments and I’ll add you to the list.

You can give generously with a lot less money or no money at all. There is a chain of blog posts on the topic. Check out what others are doing!

For more information on Donor Advised Funds, see my posts on the topic:

Have you opened or considered funding a Donor Advised Fund? Why or why not?

61 thoughts on “A Quarter Million in DAFs: A Retirement Goal Achieved”