In today’s post, I’ll review and breakdown the spending for our family of four in 2016, and will make projections for 2017. In about a year, we’ll see how close my predictions were.

A few months ago, I shared our spending totals after our first twelve months of actually tracking it. I was relieved to find that we had spent about $74,000, just shy of the $75,000 I had used as a ballpark to determine that we were financially independent.

I also was confident that we would spend significantly less in the final four months of 2016 when compared to 2015. Back then, we bought a hot tub, paid a huge orthodontist bill, made our last ever preschool payment, and purchased a Disney cruise.

We did spend some money at the end of 2016, too. My car required $1,200 in brake work. We spent $1,700 on four airline tickets for an upcoming trip to Paris and Iceland, and another $2,000 on a landscaping project. We paid our annual homeowner’s insurance and one of two property tax payments on each of our homes.

Still, we managed to close out the year having spent about $12,000 less in the last third of 2016 as compared to the year before.

I’ll detail where the money went, but first, it’s only fair to tell you where it didn’t go. One way we keep our expenses relatively modest is by cheating. How do we cheat?

We’re not exactly cheating per se, but we are able to avoid some of the big bills that other families will be paying. We also benefit from geographic arbitrage, living in a relatively low cost of living area while making an above average salary. It wouldn’t be difficult for us to spend a six-figure sum if we lived elsewhere or had the burden of a mortgage, daycare, private school tuition, etc…

How Did We Spend It?

I’ll be using screen captures from Mint.com to help with the analysis. It’s a free service, and I get nothing from them if you use it (unlike Personal Capital), but I like Mint’s service and highly recommend it. 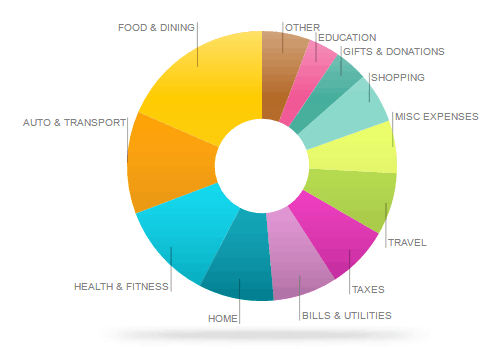 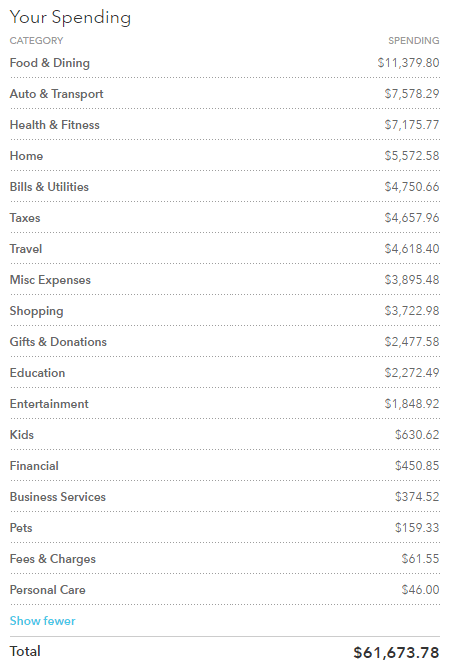 Apparently, we like to eat and drink. Cars, even old ones, are surprisingly expensive to own and operate. If gas goes back up to $4.00 or more per gallon, I could see us spending $10,000 in the automobile category. I have a minimal work commute, but our second home is over 500 miles away. The “Misc Expenses” is our second home, but does not include about $1,000 in taxes on the property.

Let’s break down some of the bigger spending categories. 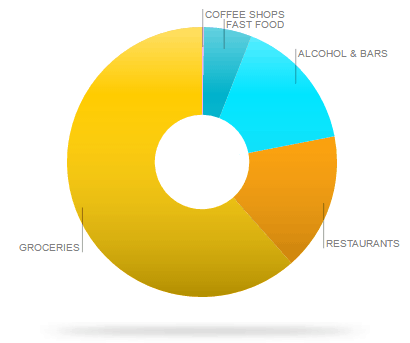 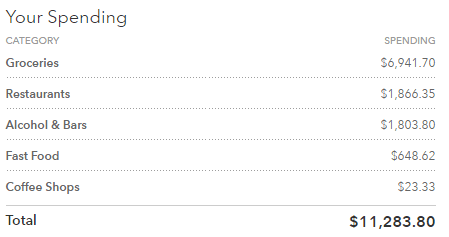 We eat most of our meals at home, and I pack my own lunch to eat when working. I’m happy with the grocery bill coming in under $600 a month. The amount of fast food is somewhat surprising, but the more we travel, the more fast food we eat.

In terms of beverages, we’re clearly not buying a latte a day, with $23 attributed to coffee shops. On the other hand, we spend an average of $5 a day as a couple on a different vice – alcohol. That includes homebrewing supplies and equipment, hosting neighborhood parties, and buying some of the best beers on the planet for personal consumption. 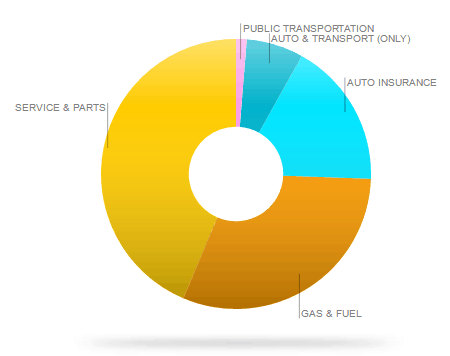 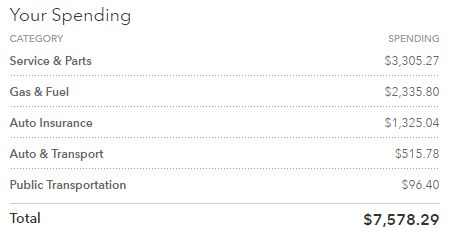 This is for a couple cars that could almost be considered “beaters” at this point. At nine and eleven years old, and more than 120,000 miles apiece, they are going to require some ongoing maintenance. Also, deer like to take out your front quarterpanel and headlight in their spare time. So, that happened.

The $516 was mostly for rental cars in Orlando and northern California. Those expenses might have been more appropriately labeled as “travel,” but they landed here. 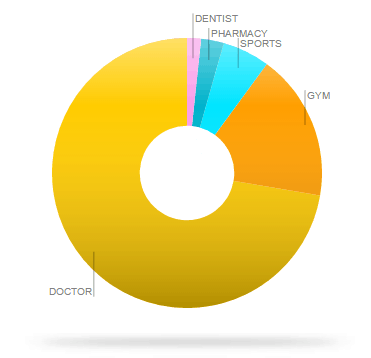 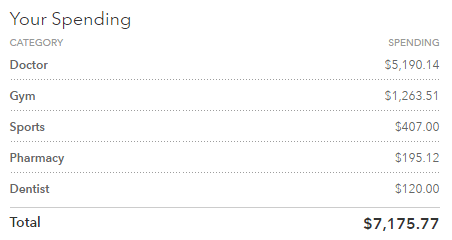 Darn those doctors! We spent more than $5,000 on them this year. Each of our boys underwent surgical procedures this year, requiring general anesthesia and intubation. Darn those anesthesiologists! With a high-deductible health plan, I’m not surprised we spent this much.

Money spent at the gym and for athletic activities is money well spent. Fitness figures into our retirement plans.

The next two categories — Home and Bills & Utilities — could probably be combined into one category totaling over $10,000. Add in the property taxes, and we’re closer to $15,000. When you consider that number, along with the opportunity cost of having a few hundred thousand dollars tied up in a slowly-appreciating asset, home ownership is quite expensive! It’s worth it for my family, but I don’t view owning a home to be a great investment.

Travel costs came in under $5,000. The Disney cruise was paid for in 2015. In 2016, we purchased airfare for a trip we’ll take this year, so that partially evens out. We scored some free flights with credit card bonus rewards, and my hospital paid for me to attend conferences in San Francisco and Maui. Thanks, hospital! 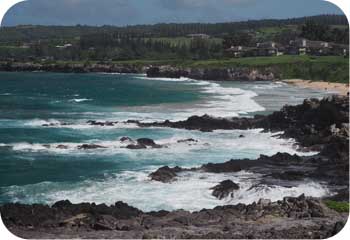 We spent some money on our boys, but bought nothing too extravagant. They each got $10,000 in a 529 Plan, but we don’t count that as spending. Piano lessons were the biggest splurge at $1,500 total, and we pay $15 a month for subscription based online family Spanish language program.

The Department of Agriculture estimates we’ll spend $12,000 to $14,000 per year per child to raise them to adulthood. A big chunk of that is for housing (extra bedrooms), so it may not be as ridiculous as it sounds. It’s all about how you do the accounting.

I didn’t include our income taxes, but as you might imagine, those dwarf the $62,000 we spent on everything else. I also anticipate them to be minimal in early retirement, so they don’t factor much into our future spending plan. If they are more than minimal, it will be from ongoing income (i.e. this website).

I did include property taxes, because those aren’t going anywhere (except up). 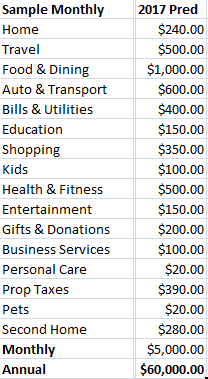 I expect 2017 to look a lot like 2016. We’ll probably spend a bit less on the home with no major projects pending, and hopefully spend a bit less on the cars as well. The odds of multiple surgical procedures is quite low, so our out-of pocket spending on healthcare ought to drop. I’ll revisit the prediction next year and let you know how well the crystal ball worked.

2018, on the other hand, could look a whole lot different than this year and last. I may wrap up my full-time job here and embark on our next adventure. We could be looking at major purchases and shifting of expenses. Downsizing from a 3,600 square foot home to a 30 foot long motorhome, for example, would have drastic short and long-term effects on our annual spending

We didn’t track expenses until just a few months before starting this blog. I had a rough idea from our monthly credit card bills, but did not know the breakdown.

Tracking expenses can help identify wasteful spending. It’s not the same as living on a budget, but monitoring spending can be useful. Now that I know what it costs to live the way we like to live, I can make informed decisions about our future.

I’ll add $1,000 a month for health insurance to say we need $2.5 Million to have financial freedom as early retirees. With eighteen months to go, I’m happy to report we’re right on track.

Do you know how much you spent last year? Are you looking to spend more, spend less, or are you happy with the status quo?