Have you been looking at your portfolio’s performance lately?

Has it met with what you were expecting? Do you understand how last year’s returns stacked up and how that might translate into future returns by location and sector moving forward?

It’s interesting to take in today’s guest post, originally published on Banker on Wheels back in December 2021, in light of the recent market volatility. Many posters on the Bogleheads forum, and other financial experts broadcasting on a variety of outlets, have collectively forecasted lower equity returns in the coming decade or two.

This analysis offers a similar view, with some suggestions on how to position yourself to emerge as a successful investor during this time. 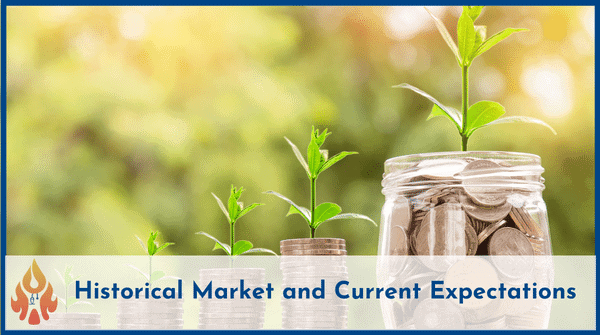 It’s the humbling time of the year to acknowledge the limits of our ability to predict markets.

For the first time in decades, inflation needs to be properly accounted for when looking at asset class returns but also our plans.

If you remained invested in stocks, your objectives may be closer than ever.

Over the past decade, world equities gained over 320% and returned 12.4% annually.

It’s probably also time to rebalance your portfolio.  Sell some of the winners, and then buy some losers.

In fact, this is what Vanguard’s model implies (more on that below). While this is great for learning with some small allocation, do not forget the rules of the game and try to remain forecast-free.

While timing any sectorial rotation is tricky, Vanguard’s model can be more helpful in another key aspect – setting the right returns expectations in achieving your financial freedom goals.

Best Performers of the Past Decade 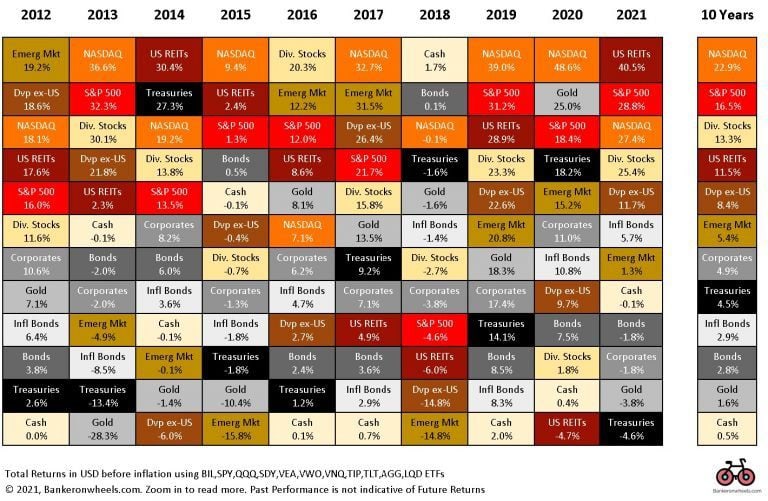 Risk and Returns When Looking at Last 20-Year Period 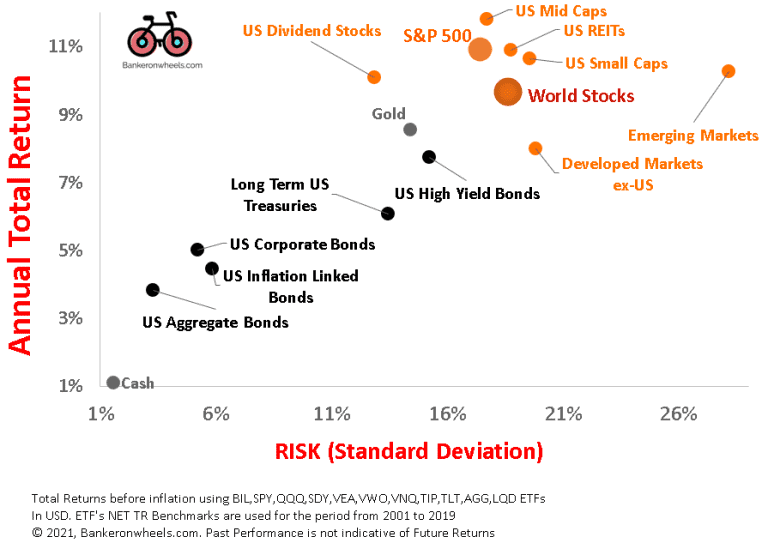 Equity Markets May Be More Rational than You Think

In 1991, John Bogle presented a model to estimate long-run stock returns in the United States in the Journal of Portfolio Management.

Bogle noted that you could (reasonably) predict stock market returns with three inputs:

Let’s focus on the last two drivers of the stock market equation in 2021.

Ask around you what drove asset prices higher in 2021. Chances are, that similarly to real estate, Bitcoin, and other assets, the answer for stocks will be that these were directly “inflated” by the Federal Reserve.

Was that really the case? Well, not quite.

P/E ratios actually shrank. The ratio of price to earnings for the S&P 500 fell from over 30 to around 25 on a trailing basis. The same trend applies to forward-looking earnings

As such, assets were priced at a lower P/E ratio despite this “money printing.” 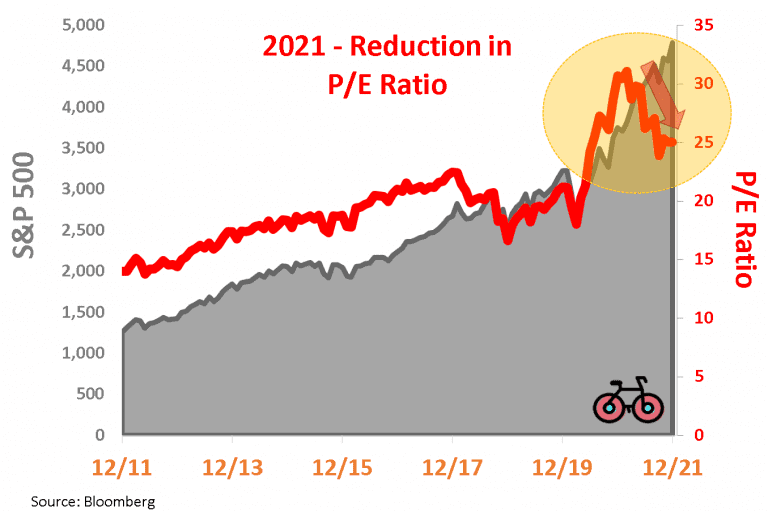 Company earnings weren’t really flat in 2021. Quite the contrary, they were off the charts.

By taking into account higher earnings and removing the negative effect of 10-15% compression of the P/E ratio covered above, one can explain most of the S&P 500 performance in 2021.

That said, government policies inflated earnings growth, which won’t be repeated in the near future.

You can understand why, unsurprisingly, the markets punished a number of growth companies that are unprofitable. 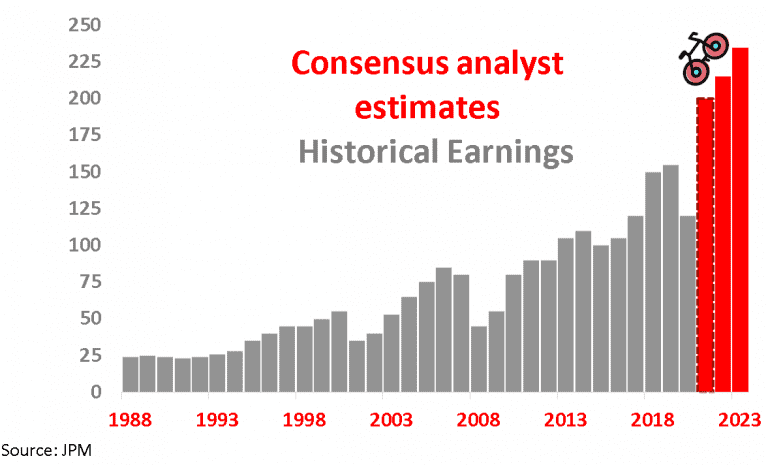 Can’t Have A High CAPE And Eat It Too

Despite the recent fall in 1-year P/E ratios, equity valuations are very high in America, as measured by the cyclically adjusted price-earnings (CAPE) ratio, which compares share prices with inflation-adjusted average corporate earnings of the past 10 years.

The current Cape ratio is 38, a level that was only higher during the peak of the dotcom bubble of 2000

In the stock market, you either have high valuations or high future returns. You cannot have both. And while the CAPE ratio has not been a useful predictor of future price levels historically, it could be an indication that future returns will be much lower.

Be cautious about comparing countries on that basis, though. Indices have very different sectorial exposure, with America driven by Big Tech. 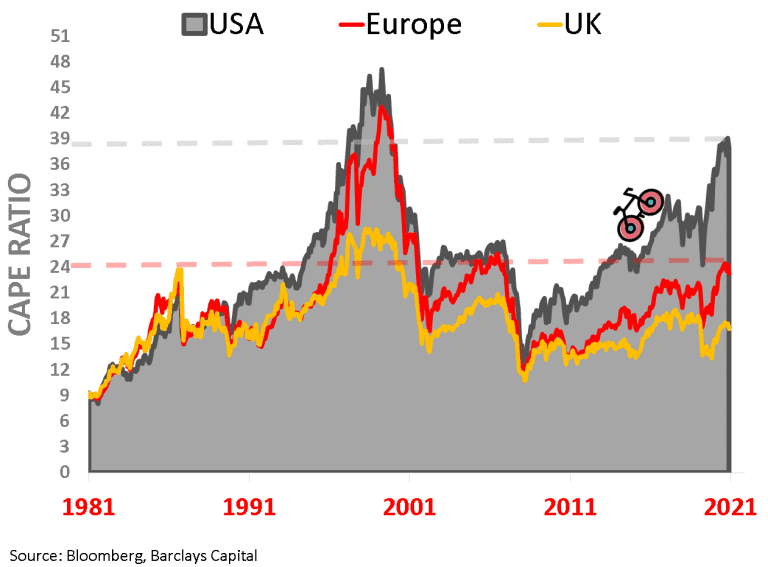 As John C. Bogle noted, since 1926, the entry yield on the 10-year Treasury explained 92% of the annualized return an investor would have earned over the subsequent decade had he or she held the bond to maturity and reinvested the coupon payments at prevailing rates.

For Europeans this means: 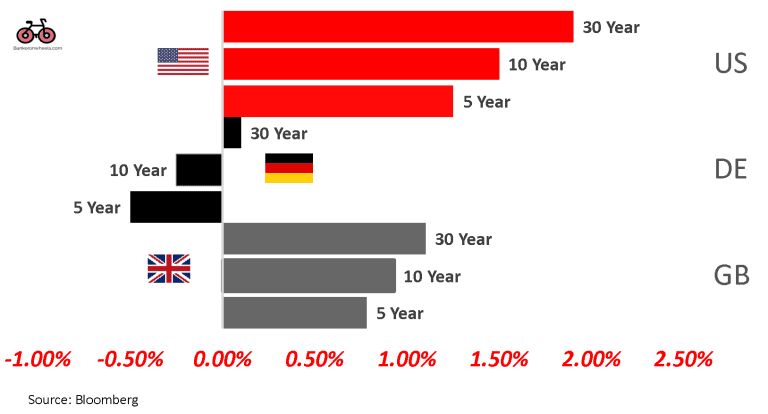 Are further price gains on bonds possible that can be harvested during a market crash by rebalancing?

These are unlikely but possible. Should there be another exogenous shock, it’s not unreasonable to expect rates to go even lower (in which case bond ETF prices may rally).

It is also a hedge against future deflationary recessions. While this may sound unreasonable in this market, this is the broader trend.

Learn more about how bond ETFs can lose value or rally using the Bond ETF Calculator.

In their previous projections, Vanguard seems to have gotten it wrong.

Overvaluations were driven by ‘Investor Psychology’ 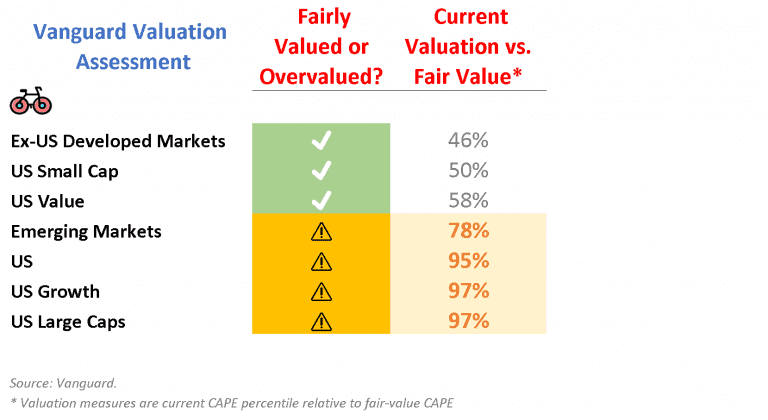 One of our diligent readers, Roberto, pointed out the over-valuation of US markets.

According to their simulations, investor behavior is to blame for US equities being largely outside of the expected ranges over the last decade. As you can see in the table above, the expected range is 25%-75%.

Vanguard predicted an average approximately 9% 10-year return for US stocks, against the current 10-year performance of 16.8%.

Emerging markets are on the cusp of that range. 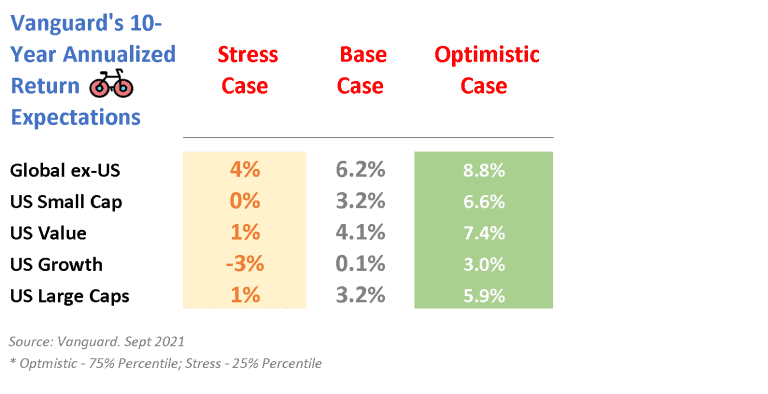 Over the next 10 years, ex-US equities are expected to outperform the US by around 3% annually, according to the same model.

The strongest assumption is the relative P/E compression, to the tune of 1.5% annually over the next 10 years. European or Japanese stocks that are more value-oriented are expected to maintain a higher dividend yield of 3%, which explains another 1.5% of the difference in return compared to the US.

A growth-to-value rotation is also implied by Vanguard with US value stocks generating a 4.1% return, while US growth stocks are expected to be flat over the next decade.

While you can’t control market returns, you may still think of small adjustments.

A more practical take-away from Vanguard’s analysis would be to keep your lazy World ETF and perhaps remove that Nasdaq bet that you may have that worked so well during the pandemic!

An ex-US cyclist portfolio adjustment could be implemented. But we may also be assisting in a P/E regime shift, with low interest rates despite higher inflation justifying paying a higher price for long-dated cash flows from Big Tech.

In a low-return environment, controlling what you can is even more important: