Dr. Jim Dahle is a charitable man, and he penned the piece that follows in praise of giving.

You may notice that his budget in the featured image below shows that their budget from a few years ago had a bigger giving wedge than spending wedge. Yes, they donated more than they spent on themselves as a family of six.

In Praise of Giving

It’s that giving time of year! We spend a little more time thinking about charity this time of year. Part of that is due to the holidays, part of it is due to the tax year coming to a close since many donations are tax-deductible, and part of it is simply due to the natural reflection on how we’ve done for the year. In today’s post, I’m going to share a few thoughts I’ve had about giving this month. 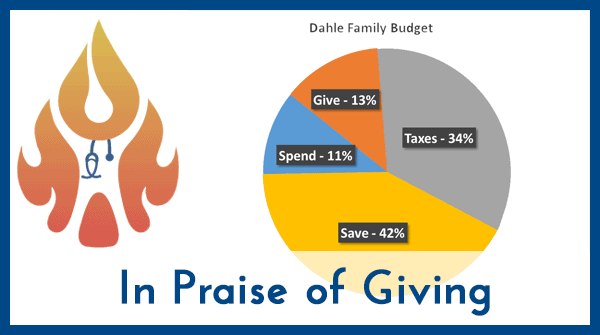 First of all, I think it is important to note that effective giving is work. Just like earning, saving, investing, paying taxes, and even spending, it takes work to do it well. For many people, it’s all about the efficiency of the charity. They want to see as high a percentage as possible of their donation going directly to helping others. There are many “charity rating” online resources that can help you in this endeavor.

For others, it’s about the effectiveness of the charity. How much good can that charity do with a few bucks? It turns out that high-yield interventions in very poor places in this world do more good than a lot of what can be done locally.

Still, others prefer to act locally, by giving to local food banks, homeless shelters, free clinics, soup kitchens, and the like. Deciding which of these matters most to you, and deciding on the individual charities you are going to give to is a lot of work.

You will also need to decide whether to give a few large gifts or many small ones. You can just do what is convenient, i.e. give to those who ask you to give, but I suspect you will enjoy the process more if you spend some time and go through the process in a more deliberate manner.

If giving is an important part of your life, chances are charity is a habit you want to pass along to your children. Get them involved in the process.

In December, we meet as a family and choose the charities we will donate to each year. Although we have met in advance as a couple and decided HOW MUCH we’re going to give, we go into this meeting open-minded and let the kids have just as much say in who gets the money as we do.

We have tried to view giving in a wider scope than just giving to charity. We are guided in this by some of our religious views. Our religion teaches that:

…ye shall obtain riches, if ye seek them; and ye shall seek them for the intent to do good—to clothe the naked, to feed the hungry, and to liberate the captive, and administer relief to the sick and afflicted.

But it also teaches us that:

…if any provide not for his own, and specially for those of his own house, he hath denied the faith and is worse than infidel.

There are a couple of lessons there. First, moderation in all things. You don’t need to give to the point where you are impoverished and can’t feed your kids.

But second, that you can give both to charity and to “your own,” however you define that. We have started 529 accounts for all 31 of our nieces and nephews—at least those who have provided us with their children’s SSNs.

Some of their parents have their own 529s and some don’t. But this year we decided to make larger donations than usual into each of these accounts. We see this as a way to take care of our own.

Another way we give that really isn’t charity is The White Coat Investor Scholarship. Now obviously we get some marketing value out of that (and you can be assured we really emphasize that to the IRS) but there is no way we’re getting as much marketing value as we’re spending on it. It’s not a great business decision. But it is a great way for us to pay it forward.

Time is money and money is time, at least to a certain extent. They’re not completely fungible, obviously. I think Warren Buffett said something to the effect of being willing to give up all his money to be young again.

It’s Not a Tax Play

If you give $100 to charity, and your marginal tax rate is 35%, at most you get $35 off your taxes. Paying $100 for $35 worth of a tax break isn’t a particularly good financial move unless you were going to give the money anyway.

Many people can’t even use the deduction since they take the standard deduction. Just recognize that you’re not going to have more money AFTER you donate to charity.

While we’re on the subject of taxes, it’s probably worthwhile to point out something that I see as obvious but which many are confused about.

Paying taxes is not charity.

The reason why is because taxes aren’t voluntary. You see, you either pay them or you go to prison with Wesley Snipes. While I’m proud of what my tax dollars do, and I pay every dollar I owe, I’m not going to leave a tip.

Now I’m no Libertarian. I’m not trying to shrink the government to the size where it can be drowned in a bathtub.

Mixing those up often leads to inefficient solutions. Personally, if you don’t want to give to charity, that’s fine. It’s your money.

The great part about charity is it is voluntary. But don’t justify it by saying you pay lots of money in taxes. Charity is about making a choice, and there is no choice when it comes to taxes.

While I’m ranting, let me just point out that leaving your money to charity when you die is a good thing, but in many ways, you’re really leaving your heirs’ money to charity. It doesn’t hurt you a bit to give it away at that point. “But I might need it,” you say. That’s exactly the point. Charity is giving away something you might need.

For similar reasons, I recommend you start a giving program long before you are financially independent, much less dead. Using a Donor Advised Fund is kind of similar, since you get the tax deduction but the charity doesn’t actually get the money. The Physician on FIRE and I ran a Pro/Con post debating this very point.

It’s Not Just for the Charity

I think when I give to charity that it does me at least as much good as the charity. It helps me to avoid being miserly. It helps me avoid a visit from the ghosts of Christmas past, present, and future. It helps me to fight off that subconscious voice saying:

You don’t have enough

I think giving a significant amount of money away sends messages to those subconscious voices, and those messages are:

If I can give this much I must be well off

I have enough and to spare.

Giving makes me less selfish and less greedy. It makes me worry about money less. It makes me feel richer. It helps me stay connected to those less fortunate than myself. It provides perspective.

Instead of worrying about whether a 3.7% SWR or a 3.5% SWR is best, I focus on those who are hungry, ill, and inadequately clothed.

Want to know if you have “enough?” Give some money away. You’ll be amazed what that does to keep your “enough” number from skyrocketing.

In addition, giving money away makes sure you’re not working more than you actually want to. Let me explain.

When you’re giving away a big chunk of money, you know that a big chunk of the work you do is not actually for you. So if you don’t really want to do it, you’ll stop and go do something you want to do. It combines with your self-interest to muzzle your workaholism.

Philanthropy and volunteerism are somewhat unique to Americans, and one of the things I love about this country. We may be greedy capitalists, but the most capitalistic among us have set some pretty impressive examples of philanthropy.

Andrew Carnegie isn’t remembered so much for his steel empire as for the >2,000 libraries he founded. He gave away over 90% of his wealth before he died. He said, “The man who dies rich dies disgraced.”

Will Bill Gates be remembered more for Microsoft or for the Gates Foundation and the work it does?

Even the relatively young Mark Zuckerberg has committed to give away 99% of his Facebook shares during his lifetime. Given these examples, it’s kind of pathetic that the US isn’t even in the top ten of countries by percentage of people who have given to charity in the last month! 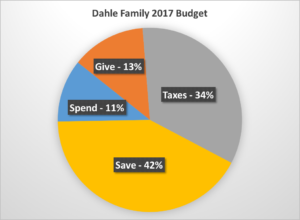 I don’t care what the cause is or who you give to. Charity. Your family. A political party. Whatever. I don’t care how much you give. But give some money away this year to a cause or person you care about.

It will do you good. Done well, it will do them good. Try to adopt a “steward” mentality. Imagine this isn’t your money. You’re just managing it for a few decades on behalf of the world. Manage it well and perhaps you’ll be given more to manage.

2017 was the first year we gave away more money than we spent. Don’t worry, we still spent plenty, saved plenty, and the IRS knows we paid plenty of taxes (in fact the figure in the chart on the right is just an estimate and I suspect it’s a little low). So far, we’ve been able to give away more than we spent every year since.

What do you think? What role does giving play in your life? Do you give to charity now? Do you plan to when you die? What else do you give to?

2 thoughts on “In Praise of Giving”