Here at Physician on FIRE, I like to help people figure out how they can set themselves up to not only retire early, but to also retire well. Five million dollars should do the trick.

According to DYQDJ, that would put you at about the 98th percentile in terms of U.S. net worth (primary home equity excluded). That’s definitely fatFIRE.

How does age 55 sound? Yes, there are people out there who have retired by 45, 35, and younger, but you do need some time to amass that big nest egg.

A 55-year old can expect to live an average of 26 (male) to 29 (female) more years, according to the Social Security Administration’s actuarial tables. But you’re above average, right? I’d say you could easily have 3 to 4 decades to enjoy that money.

Can everyone come up with $5 Million in retirement savings by age 55? No, not everyone. Can anyone? Possibly. Can you? Absolutely.

The fact that you’re here reading this is a good start. Plus — remember — you’re above average.

In fact, it’s likely that you’ll have significantly more than $5 Million after a few decades of retirement if you withdraw 4% or less of your money early on and adjust that spend upwards with inflation as time goes on. The median outcome based on historical returns would be to have $13 to $14 Million after using a 4% SWR plan for 30 years when starting with five million dollars according to Michael Kitces‘ analysis.

Remember, also, that by the time you retire, you can (and should) be done paying for things like a mortgage, student loan debt, your kids’ college costs (which can be prepaid / pre-saved) and costs related to your job like commuting and work clothing. $150,000 to $200,000 a year can afford a pretty comfortable lifestyle, especially when you account for so many big ticket items dropping off your list.

If your goals and expenditures are bigger and you’ve got the $10 Million Dream, I’ve got a post for that, too.

Related: Top 5 Expenses that Go Down in Retirement

#1 Slow and Steady Wins the Race

Let’s say you finish high school at 18 and graduate from college at 22 with a degree that will help you land a good job. In college, you met someone who followed a similar path.

The two of you understand what compound interest can do for your finances, so you start setting aside money as soon as you get your first real paycheck. Living like a student until you’ve saved enough for a ring, a down payment on a house, etc…, you and your partner prioritize paying yourselves first.

How much would you have to set aside per month to have $5 Million in retirement savings by age 55? For simplicity’s sake, let’s assume a constant and steady amount saved with steady returns, as well.

A few other assumptions: investment returns are a reasonable 6%, with low-cost index funds, investment fees average 0.1%, and overall tax drag on the portfolio is 0.25% since some of the investments will likely be held outside of tax-advantaged retirement accounts.

With two people earning and saving, the monthly savings required for them to reach $5 Million by age 55 when starting from age 22 is all of $2,200 per month per person. 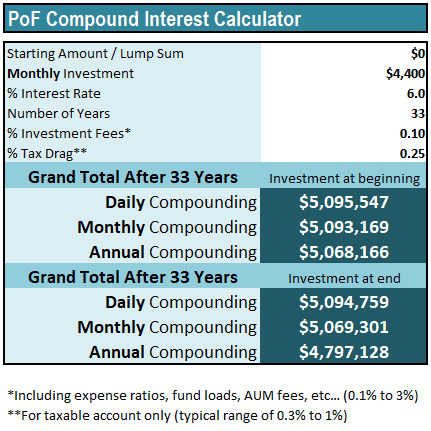 Now, it’s true that after 33 years, $5 million won’t have the same purchasing power as it did early on. You can account for that a couple of different ways.

If you assume that the couples’ annual investment amount will increase at the rate of inflation, then they’ll end up with more than $5 Million in nominal dollars, but the final sum should have the purchasing power similar to what $5 milllion would have bought them at the beginning. 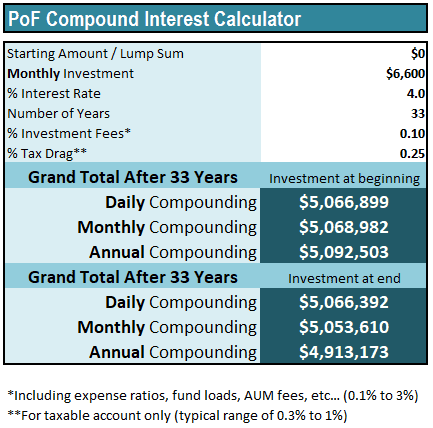 You can play with the numbers yourself or download this and a whole bunch of other financial calculators to use on your own computer and modify as you wish.

#2 Develop a Remarkable Talent or Product

While it’s true that slow and steady wins the race, it’s also true that there are many thousands of people each earning millions of dollars every year.

If you happen to be exceptionally skilled at something, particularly something athletic or artistic, you may be able to follow that passion to a big payday.

Through some combination of skill, luck, hard work, and perhaps connections, you might join the ranks of the highly paid actors, actresses, singers, performers, athletes, Youtubers, etc… Even the top 10 video gamers average 8-figures apiece in annual earnings.

How likely is it that you’re going to earn 7 or 8 figures a year doing something you love? Pretty darned slim, so be sure to have a Plan B. Nevertheless, plenty of real people end up in this category, and it seems like we all know someone who knows someone who “made it big” in their respective field.

You don’t necessarily have to have amazing skills or be connected like a Kennedy to strike it rich, either. Invent and patent the right product and you could end up having more passive income than you know what to do with.

In any of these scenarios, you don’t need to play with compound interest calculators to get to $5 Million. You just have to understand that fortune and fame can be ephemeral, and set aside a good chunk of your income while the getting is good.

#3 A Negative Net Worth at 30 (With Great Earning Potential)

This is the doctor’s path. It could also be the path of the lawyer, dentist, nurse anesthetist, etc…

It’s the path I took, and although I retired from medicine without a $5 Million net worth, I was well on my way at 43, and investment returns alone should get us well beyond that mark by 55.

For this example, we’ll assume a single income, a net worth of -$300,000 (that’s a negative $300k) but with annual earnings in the multiple six-figures.

In this case, we need to accumulate the $5 Million plus enough to pay off the $300,000 in student loan debt. Assuming you refinance to a low interest rate and pay it off within 10 years, you shouldn’t have to add more than $500,000 to account for the debt and interest payments.

Using the same assumptions for investment fees and tax drag with 6% investment returns as we did above, it looks like you’ll need to set aside $8,400 per month, or right around $100,000 a year, to retire that debt while retiring with $5 Million at age 55 with a 25-year working career. 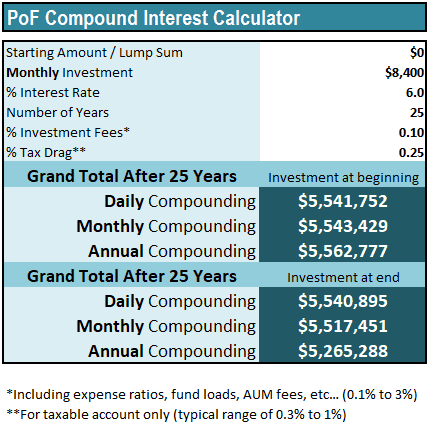 It’s not easy to save $100,000 a year, particularly on one income. In a two-income household, it could certainly be easier to do. Geographic arbitrage can be really helpful when you’ve got a lofty goal like this. The ability to live and work in an area that costs less and pays more is somewhat unique to medicine. Take advantage if you can!

Other than that, it’s all about maximizing the distance between how much you earn and how much you spend. Earn more, spend less, and if you can meet the live on half challenge, more power to you.

Related: Should You Try to Spend Less or Earn More?

Good news. You won the lottery! If the payout was at least $10 Million before taxes, you can now retire with $5 Million or more.

Bad news. Your rich uncle has passed away and will no longer be hosting you and your extended family at his beachfront compound. However, you have inherited a sum that will allow you to build a compound of your own, if that is your wish.

These are not the most common paths, and they’re not avenues to be pursued, but new multimillionaires are minted via lottery jackpots and inheritance on a daily basis.

#5 Build Up a Business and Cash In

I noticed a new home going up on a nearby lake, and it looked to be enormous. Who was building it? One of the athletes or entertainers we talked about earlier?
Nope. A guy who owned a local septic and drainfield business who recently cashed out.

In The Millionaire Next Door, we learned that doctors, in particular, tend to spend a lot and look rich, but many of the best accumulators of wealth are actually self-employed small business owners.

When you own and operate a small business, increasing your revenue as time goes on not only brings more money in for you to spend and save each year, but it also increases the value of your business.

Whether your business is in pipefitting, data entry, brewing beer, or garbage collecting, the longer you stay in business and the bigger your client list or customer base grows, the more likely you are to be in possession of a multimillion-dollar business.

When the time is right for you to move on, there may very well be an opportunity for your business and its assets to be acquired by a larger company or competitor in the space, or to be sold to an individual ready and willing to step into your shoes.

Entrepreneurship doesn’t always pan out as planned, and most successful business owners fail before they succeed, but the entrepreneurial path definitely deserves a spot on this list. It’s probably the third most common path to a cushy retirement among this list of five.

Forging Your Own Path to $5 Million

There’s no best way to become wealthy, but I’ve presented five ways it can be done, and there are certainly more. Whether you choose the slow and steady route, become a highly compensated artisan, take the doctor’s path, luck into it, build a business, or forge a path of your own, there is a way to make it happen.

Whichever path you choose, it is important to earn a good salary, save a decent chunk of it, and be patient. Rome wasn’t built in a day, and unless you follow path #4, your wealth won’t be either. But real wealth is attainable, and I wish you the best of luck as you forge a path of your own.

Download the spreadsheet calculator used in this article, along with a number of others that will help you in your quest to obtaining financial freedom!

What path, or combination of paths, are you taking to build your retirement wealth?