A young Dr. Findley, the inexplicable fifth of our four physicians, once dreamed of having $10 million. He wasn’t sure why. It may have been the insurance agent who presented to his residency class, showing them how they had all won the career lottery. After all, 40 years of a $250,000 salary is $10 million in income.

A few years later, as Dr. F was mowing his lawn and allowing his mind to wander. He realized he was on track to have $2 million by age 40, $5 million by 50, and $10 million by 60. The Rule of 72 and a crude understanding of his savings rate (calculate yours) allowed him to make these calculations without breaking stride. He might have left a strip or two of grass in his wake amidst the excitement, but he went back and covered his tracks.

It’s a big, round number. We like big numbers; we like round numbers. $10 million is probably the biggest, roundest number that someone like Dr. F could expect to achieve over the course of a typical physician’s career.

Dr. F was not alone in his dream. Michael @ Financially Alert has publicly stated a $10 million net worth as a goal. So has Dominic, the Gen Y Finance Guy. Dr. F was in good company.

You’ll have to ask Michael and Dominic what their plans are for all that money. Dr. F didn’t have much of plan, and he now knows that $10 million would allow him to spend $300,000 to $400,000 a year at a 3% to 4% withdrawal rate, or about 4 to 5 times as much as he currently spends. Dr. F doesn’t necessarily have a goal of $10 million these days, but he can’t help but wonder what it might take to get there.

When we met Dr. F, he was financially independent, with retirement assets of $2 million, and contemplating a half time position. With an $80,000 budget, and a $400,000 salary plus match and profit sharing, he was able to invest $18,000 a month. Working half time, his monthly investments were reduced to about $6,000 a month.

How long would it take Dr. F to reach $10 million if he continued to work full time? Dr. F has a spreadsheet for that, looking at the march to millions at a range of returns (presented as CAGR: compound annual growth rate) from 2% to 10%. Dr. F realizes he could have flat or negative returns, but he’s reasonably optimistic that, particularly over the long haul, nominal returns will at least keep up with inflation. 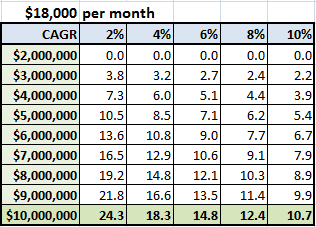 Working full time, Dr. F could be a decamillionaire in 11 [Did somebody say Eleven?] to 24 years with these returns. That is a wide range — he could reach the target in his early fifties or late sixties, depending on returns. Looking at a more modest goal of $5 million, the range is narrower, but quite variable, from 5.4 to 10.5 years.

Could Dr. F reach the goal working only half time? Let’s ask a spreadsheet. 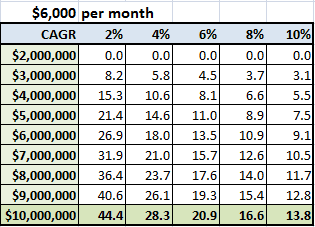 The goal remains within reach. In fact, with excellent returns of 10% a year, it would only take a few extra years compared to working full time. On the low end of the returns spectrum, he’s looking at working 44 more years. Not gonna happen. Still, with returns exceeding 6%, $10 million dollars could be had in 14 to 21 years.

Now, $10 million won’t have the same buying power in 14, 21, or 44 years, but we’re more interested in the extra digit than the inflation-adjusted value. Dr. F is never going to spend it, anyway. He’s much more likely to donate a significant portion of it.

Working A Week a Month

Exploring a third possibility, what would happen if Dr. F worked just enough to cover his expenses and neither added to, nor depleted his retirement funds indefinitely? Having read PoF’s post on working 12 weeks a year, he is interested in the ramifications of this scenario. 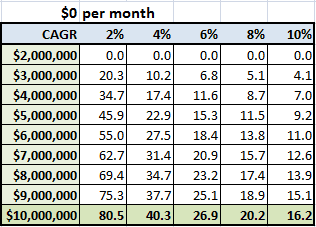 Letting that money ride, it’s out of reach in this lifetime at a 2% return, but very much a possibility at typical historical equity returns in the range of 6% to 10%. Even with 4% returns, he could see that eighth digit in his early eighties if he is able to keep his hands off the growing nest egg.

While he may not continue working as a physician all those years, he could engage in other activities to cover his living expenses. His wife could always return to work (are you reading this, dear?), he could engage in some freelance writing, or maybe he could start a successful blog of his own.

Do you have time for one last scenario? Great!

Suppose Dr. F has had just about enough and wants to retire tomorrow, at which point he’ll start drawing $6,000 per month for a $72,000 annual budget. This is a slight downgrade from the $80,000 he spent while gainfully employed, but he saves on the cost of commuting and work Crocs. He and his family are willing to be a bit more frugal to spend more time with him.

Note that these calculations assume a constant return, negating the sequence of returns risk, which isn’t entirely realistic, but are as realistic as I can get with my Excel skills. 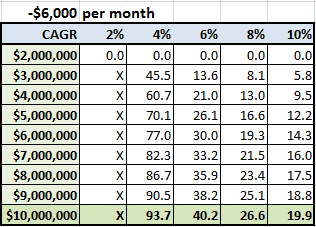 The numbers have shifted a bit, but once again, the $10 million dream remains intact. Granted, it will take longer, and the value of that target will be worth less in real terms as time goes on, but nonetheless, the dream is alive as long as he remains alive for another 20 to 40 years and earns 6% to 10% on his money.

Earning an additional 2% on his money essentially wipes out the $6,000 a month he is drawing from the portfolio, as compared to the previous scenario in which the money was left untouched. His nest egg would continue to grow with a 4% constant return, because his initial draw is $72,000 / $2,000,000 = 3.6%. If we had started with a 4% withdrawal rate, he would have to earn more with his investments to outpace the spend rate.

Calculate Your Own Dream

Plug your own numbers in to replace any of the numbers in gray, including monthly contribution, goals, and percentages to learn how long it might take you to reach your dream number. Plug in your current assets for $0 if you’re not starting from scratch.

To download this calculator in one file with all other calculators I’ve created, subscribe to receive new post notifications and a quarterly progress note via this link. You can unsubscribe at any time.

What I Learned From the $10 Million Dream

I did find it fascinating, albeit not entirely surprising, that the ability to reach such a number will depend less on income going forward, and more on investment returns. 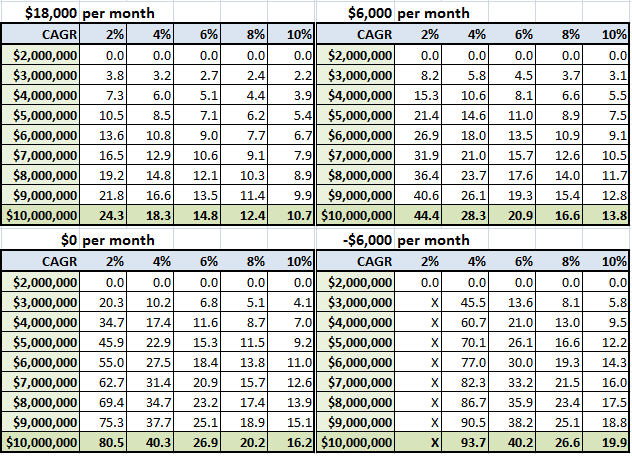 If the goal were $5 million, it could be achieved in 10.5 full time years with 2% returns, or 10.5 half time years with a little better than 6% returns. Increasing returns by just over 4% makes up for working only half time.

One more. Earning just enough to cover annual spending, Dr. F will reach $6 million in 13.8 years with 8% returns. If he works half time, investing $6,000 a month, he reaches $6 million in 13.5 years with 6% returns. Again, having established a baseline of $2 million in retirement savings, Dr. F’s future net worth is more dependent on his investment returns than his workload.

You read that right. Having achieved financial independence, by virtue of having $2 million in retirement assets and an annual spend of $80,000, this physician’s future net worth will be influenced more by the performance of his investments than the contributions from any further work.

It is, of course, true that he will end up with more money or reach a certain goal more quickly if he is working. Returns will be what they will be, whether he is working or not. Nevertheless, the whims of the markets will have a more profound effect on his future riches than his ability to earn money from this point on.

Armed with this amazing nugget of truth, Dr. F feels more empowered to make a bold decision sooner than later.

[Post-publication update: While I’m not Dr. F, I can identify with the situation he found himself in. I decided to start working part-time in the fall of 2017, and it turned out to be a great decision for my family and me.

After August of 2019, I have no plans to work in medicine again, but will leave that door open, just in case.]

Have you reached the point where your investment returns are at least as valuable as the work you do? Has this fact changed your approach to work? Why or why not?

69 thoughts on “A Fifth Physician Revisited: The $10 Million Dream”