[PoF: Today’s guest post comes to us courtesy of Dr. Cory S. Fawcett, a general surgeon who quite recently retired early from clinical medicine in his mid-fifties. Notice I didn’t simply say he retired.

The good Dr. Fawcett remains busy, having published The Doctors Guide to Eliminating Debt, The Doctors Guide to Starting Your Practice Right, with a third book in the series due out soon. He also writes at his own site, provides one-on-one financial counseling, and is a public speaker.

Let’s see what Dr. Fawcett has to say today.]

When the New Car Bug Bites

When I was a second-year resident, my car began visiting the shop too often. Maybe it had a thing for the mechanic. It was a fourteen-year-old Oldsmobile Delta 88 my parents had given me. My wife had nicknamed this very large car The Boat. As a resident working 80-110 hours a week, there was no time for the frequent visits to the shop. It was time to replace my car. [PoF: True story — I drove a ten-year old Olds Eighty Eight as an intern. I later traded up (?) for a Dodge Caravan before buying a Mustang Convertible as a resident.]

As I embarked on the search for a car, I figured my paycheck, about $25,000 a year, could handle the payment. I had fallen into the trap of thinking car payment instead of car price. What kind of car was befitting a young new doctor? After all, I would still be driving it at the end of my residency and wanted to look good as a new staff doctor.

Mercedes was the first idea to pop into my head. I’m not sure why, since I didn’t know anyone who had one and I had never been inside one. It seemed like the right fit for a young doctor’s image. With the target car chosen, it was time to proceed to the dealership for a test drive.

In 1990, the Mercedes 300E was priced around $30,000. A seven-year loan payment would only be about $400 a month. Pulling onto the car lot driving The Boat did turn a few heads. What was a guy driving a car like that doing at a Mercedes dealership? When they discovered I was a doctor, they jumped to attention. Their whale had arrived.

The test drive was awesome. The look, feel, and smell, and the confidence I experienced while driving down the road were new to me. The sound when the door closed, a good solid clunk, was very different from the clink and rattle made when shutting the door on The Boat.

What a car. Now I knew what the big deal was about owning a Mercedes, and I wanted one. The new car bug had bitten and its venom flowed through my veins. I reluctantly returned the keys and sat down with the salesperson to come up with a deal.

Reality began to set in as I pondered all the things I could do with $30,000 besides driving around in a very nice car. Was a car really worth so much money? More than one year’s salary? Was more than an entire year of every-other-night call worth a trade for one metal car? How would the $400 payment really affect our spending plan?

My wife and I agreed at the time of our wedding, four months into my internship, to live on only one of our incomes and save the other. We both earned about the same amount, although she did it with half the hours I put in. We figured if something happened to one of our incomes, it wouldn’t hurt us financially since we could live on only one income anyway. Taking on this car payment would mean encroaching on our second income for the budget to balance.

We Could Easily Afford a Ford

The salesperson was not pleased to hear me say I would think about it and get back to him. Carolyn and I talked about it over the next few days. We knew it was more than we should spend at that time in our lives.

The Mercedes never ended up in our garage. After much lamenting, a one-year-old Ford Taurus sat in the driveway.

Similar style car, but not similar quality. At one-third the price, our spending plan had a lot more breathing room. Regrets never surfaced from the decision to forgo the Mercedes. We have purchased cars since then costing more than the $30,000 sticker price we passed on that day, but we waited until we could pay cash. The easy monthly payments didn’t get their hooks into me, so I dodged a bullet.

About that same time, one of the other residents in my program came driving into the parking lot in a brand new sports car. This guy had been constantly complaining about how depressed his enormous school loan debt made him feel. He was so weighted down, he wondered if he could ever get out from under his debt.

When he drove in with a gorgeous new car, I asked him if he won the lottery or inherited some money. How could he afford such a car with all his debt? He said he was getting so depressed about his debt that he needed a pick-me-up, so he bought a new car.

I had a hard time grasping his concept. How could adding more debt and more monthly payments decrease the depression he felt from being in debt? I’m sure he felt better for about a month until his first car payment was due. Then his depression returned and was probably worse than before.

The New Car as a ‘Gateway Drug”

Many doctors have fallen into the new normal lifestyle of debt and easy monthly payments. Once you begin, you tend to never go back. It’s too easy to have it now and agree to the easy monthly payments, while disregarding the total cost and the effect it will have on your future.

Do you have Alzheimer’s Debtmentia? Do you think monthly payment instead of total cost? Many of us do and I have struggled with it myself. Don’t fall into that trap. The car you can afford is the car you can write a check for. If you need to borrow the money to buy the car, you can’t afford that car.

Often when I do a one-on-one financial makeover with doctors, I find automobile purchases to be a problem in their overall financial picture. It is very easy to overspend in this area. When you minimize expenses, you maximize your wealth.

“There is more to life than increasing its speed.” – 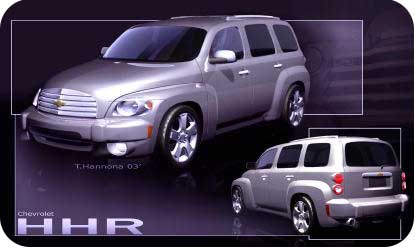 The closest I’ve come to owning a new car was when I bought a 2006 Chevy HHR in June of 2006, but the car had been a prior rental and had about 12,000 miles under its belt. Guess what I’m driving now?

You guessed it! A 2006 Chevy HHR with 133,000 miles. I’m not terribly attached to it, but it still gets the job done and manages a decent 30 miles per gallon on the highway. When it finally breaks down, I’ll replace it with a roomier vehicle that is capable of pulling a travel trailer.

You never know when that feature might come in handy.]

51 thoughts on “When the New Car Bug Bites”