Am I retired now?

In some ways, yes. In some ways, no. I haven’t “gone to work” a single time in the last almost nine months. When travel was a viable option, my family and I were away from home, exploring exciting new places for weeks and months at a time.

On the other hand, not a day goes by that I don’t spend at least a few minutes, and usually at least a few hours, on the computer doing something related to Physician on FIRE. Most of it’s enjoyable, and I’m happy to do it, but if I were to go offline for a week or two, the “work” would pile up.

I’ve talked more about this conundrum in the aptly titled Retired Not Retired.

Dr. Jim Dahle also recognized the changing and vague definition(s) of retirement. He says it’s “squishy.” I think little frogs and brown bananas are squishy and retirement is ill-defined, but perhaps retirement fits the squishy bill, as well.  This post was originally published on The White Coat Investor. 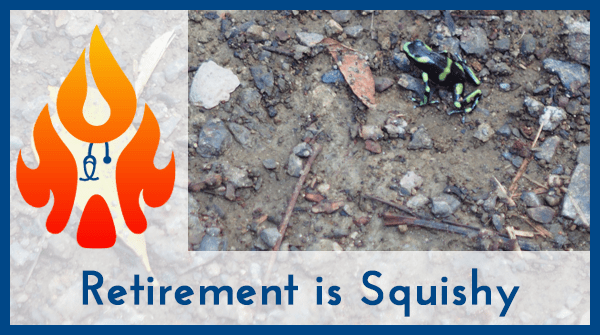 As a mid-career doctor, I’ve been doing a lot of thinking lately about retirement. 100 years ago, retirement basically didn’t exist. You worked until you couldn’t work any longer and then your family took care of you for a year or two before you died.

50 years ago, there was this idea of retirement where you worked for the company for 30 or 40 years, then one day you went from full-time to not working at all, you got the gold watch, and you started golfing every day. These days, when people hear the word retirement, I think that second image is what usually pops into their minds.

However, over the last decade or two, the concept of retirement has become much more amorphous. It means different things to different people. It is no longer a date, or a day you go from full-time work to not working at all, or even the end of work. It’s squishy, and it’s getting squishier all the time. Let me give you some examples of the ways it has become squishy.

The New Look of Retirement

The first concept to consider in a discussion of “what retirement is” is the fact that you don’t have to work full-time for 30-40 years straight before retiring. Especially when you are a high-income professional, cutting back to 3/4 time or half time is a very reasonable thing to do.

Regular readers will recall I moved from full-time clinical work to 3/4 time clinical work (16 shifts to 12 shifts a month) September 2016. In June 2017, I dropped the overnight shift (10 pm to 6 am, although I still work until 2 am a few times a month.

[Update 2020: This post was originally written in December 2016. In 2018, I cut my clinical time back further from 3/4 time to 1/2 time. WCI had grown too much to be neglected as much as I was neglecting it and I had simply run out of hours in the week. I’m still searching for that elusive balance, but if I had never cut back on hours there would be no podcast, no WCI financial boot camp, no online courses, no WCICONs, etc.]

Now, I know many of you work FAR more hours than I ever did as an emergency doc, but given the high pace of work and the rotating shifts, full-time in emergency medicine is generally considered anything more than 15 eight hour shifts or 12 twelve hour shifts a month. So 12 eights is 3/4 time.

I knew it would be nice to cut back, but I had no idea all of the benefits I would see from doing it in just the last three months. Here is a list:

Some work situations, professions, and specialties lend themselves better to part-time work than others, but most doctors who are willing to take the hit in income can work less, especially if they’re creative. This might be a new parent who wants to spend more time with pre-school children, or a mid-career doc with kids in “the fun ages” of 5-10.

It might be a parent who needs to be there when the struggling teenager comes in the door from school. Or perhaps take care of an aging parent. Maybe it is someone who wants to go back to school for another degree, explore another career, or follow an entrepreneurial pursuit.

Maybe they’re just feeling burned out and need to spend more time skiing. Who knows? But this idea that you have to work full-time for decades before you can cut back at all is totally false.

Not only can you cut back, but you can stop working altogether for a period of time. Maybe it is just a one-year sabbatical. Maybe it is quitting for five years until the kiddo gets into kindergarten. Maybe it is busting your butt in your 30s, “retiring” to travel the world in your 40s and then returning to paid work at 50. Maybe it’s a 1-3 year “mission” in a foreign country. You don’t have to work full-time and you don’t have to work every month, year, or even decade.

A doctor going part-time or taking serious time off will have to deal with the twin issues of licensure and competency. While you aren’t working, you may have to figure out a way to maintain licensure, do CME, stay credentialed at a hospital, maintain board certification, cover tail insurance, etc. That is difficult in and of itself. But when you combine “showing people you’re competent” with “actually staying competent” (and we all know those are two different things), it gets really tricky.

When I’ve been gone 10 days without working a shift I feel like I’ve lost a step. I can’t imagine what it is like after a year. Medicine is something that you practice — it is difficult, requires continuous education and learning, and is constantly changing.

I have no doubt that doing it intermittently or only part-time affects your cognitive and procedural skills. Obviously, getting burned out early doesn’t do your patients any good either, but you’ve got to strike a balance there. I think it is particularly dangerous to take significant time off or go part-time in your first five years out of training (which is often precisely the time newborns show up in physician families.)

Practically nobody “goes to the factory” at 18 and stays there for 50 years anymore. Outside of the professions, the average worker stays with the same job for just 4.6 years. That’s not terribly new (it was 3.7 in the 1980s,) but it illustrates the fact that a career is not just one thing. It might be a long string of a lot of different things.

The better you manage your finances in the first career, the more options you’ll have in your second one. But there’s no reason you have to stay in the same job or even profession for your entire life.

In fact, there is nothing that says you have to stop working at 65 or 70 anyway. Does retirement really have to mean you stop working for pay at all? I think it’s squishier than that now. Mr. Money Mustache discovered this when he ran into the Internet Retirement Police. Some people have even tried to define the term “retirement.”

I think, “Why bother?” It’s just life and what you do with it. In fact, some very early retirees are scared to admit they’re not actually working for pay because others look down on them. They prefer to say they’re “between jobs” or “a consultant” at least until they get into their 50s!

Financial Independence is Squishy Too

In conclusion, realize that while it is important to “save for retirement,” what that retirement actually looks like is highly variable and personalized and that’s a good thing.

What do you think? Why do you think retirement is such a squishy term these days? Which of these “retirement-like” changes have you done or plan to do in your life? Comment below!

8 thoughts on “Retirement is Squishy”