Today, I’d like to introduce a fifth physician, Dr. Findley. This physician shares a few qualities with our other 4 physicians.

Like Dr. A, his family budget is about $80,000 per year, and he shares her interest in part-time work. Like Dr. C, he found a job in an area and specialty with excellent pay, and is now earning about $400,000 per year.

We’ll pick up the fictional Dr. Findley’s story at the point where he becomes financially independent. Despite some early mistakes, he managed to realize his goal of having 25x annual expenses by age 40. A full-fledged multimillionaire, the financially fit Dr. Findley begins to contemplate his future.

A Fifth Physician: Dr. F & The Half Time Option

With an excellent savings rate, and life of relative frugality, the totally imaginary Dr. Findley realizes he doesn’t necessarily need to work for money, but he mostly likes his job.

Still, he wishes he had more time to spend with his family, leisurely enjoy his hobbies, exercise, and generally enjoy life without the pressure of time constraints that come with a full-time doctor job.

Ever since the completely made-up Dr. Findley realized he was financially independent (FI), he started telling people about it. He rattled off the benefits of FI  to friends, acquaintances, and complete strangers. He proselytized to the uninitiated and made friends with others who shared his FI status or aspirations. He was most definitely talking the talk.

But was he walking the walk?

One of the key benefits of financial independence is the ability to create the job you want, to live life on your own terms rather than someone else’s.

In fact, he started spending so much time discussing personal finance that he actually had less time to do all the other things he enjoyed. He actually enjoyed talking about FIRE quite a lot, more so than working a more stressful physician’s job, but his time was becoming more precious, and his kids weren’t getting any younger.

Dr. Findley has an analytical mind, and he doesn’t make rash decisions. Dr. Findley can work a spreadsheet like nobody’s business. He realized that he might be able to create a half-time position and have two to three weeks off every month, but he was irrationally afraid of the financial impact of earning “only” $200,000 a year. After reaching FI. Seriously.

The imaginary doctor decided to take a closer look at how switching to part-time work might affect the balance sheet. He felt quite confident that such a change would improve his life, but he didn’t want to make such a drastic move if it would seriously delay his Über-conservative goal of having a 2.5% withdrawal rate.

Being familiar the Physician on FIRE site, he downloaded the calculators and went to work modifiying them to best fit his current situation. Here’s what he came up with.

Working half the hours will of course slash Dr. Findlay’s salary in half. However, Dr. Findlay will pay a smaller percentage of his salary in taxes, with an income tax burden of 19%, compared to 26% when working full time.

Working half time still allows him to contribute the maximum amounts to his retirement accounts and fully fund his children’s 529 education accounts.

His ability to contribute to his taxable account is severely diminished. Working full time, he can sock away a 5-figure sum every month. As a half-timer, it’s barely a 4-figure number. He’s not terribly concerned though, since half of his current ‘stache is in his taxable account.

As you can see at the bottom of the table, the good and entirely fake Dr. Findley will reach his number of $3.2 million within ten years in any of the presented scenarios. $3.2 million will represent 40x annual expenses, or a super-safe withdrawal rate of 100/40 = 2.5%.

If Dr. Findley continues to burn the candle at both ends, he should meet his goal in 3 to 5 years by working full-time. Of course, he’ll probably be afraid to quit cold turkey, and would likely pursue a part-time option, or perhaps a locum tenens position in an exotic location at that point.

By transitioning to a half time schedule, he can expect to meet his goal in 4 to 9 years with reasonable returns. The astute Dr. Findley notices that there is some overlap between the two scenarios. In other words, his goal could be met earlier with solid returns and a half time job compared to modest returns while working a full time job.

Dr. Findley takes note and ponders how crazy it is that the whims of the markets could so profoundly affect his future nest egg. Market returns could be a bigger factor than his efforts to earn money.

Seeking a little more clarity than the few digits at the bottom of the first table could provide, Dr. Findley continued to crunch numbers. He created two more tables to evaluate the size of his nest egg if he were to continue working either part time or full time for the next ten years. 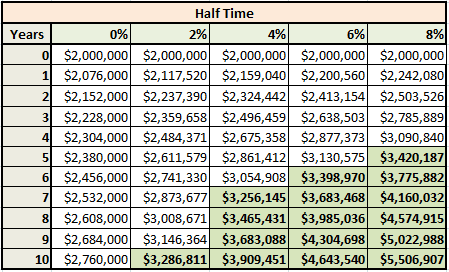 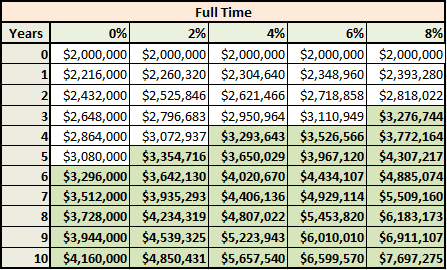 A few facts stood out to Dr. Findley:

There were other facts that occurred to the make-believe Dr. Findley. It would probably be easier to work 6 or 8 half time years than another 3 or 4 full time years. Doing so would also provide an additional 3 to 4 years of health insurance for his family, and give him more time to build up his 401(k) and 457(b), although at the expense of the already sizable taxable account.

Additionally, Dr. Findley realizes that his knowledge and networking could be parlayed into some sort of a non-clinical endeavor that could potentially generate additional revenue.

The half time option would open up more time for such an undertaking, which could end up looking more like a three-quarters time option, but with additional “work” that doesn’t come with the risk and heavy demands of being a full time physician.

Dr. Findley and his family clearly have some thinking to do. Fortunately, I’ve given them some solid data to deliberate.

[Dr. Findley’s story is a dramatization. Any resemblance to actual persons, living or dead, is purely coincidental.]

[post-publication update: I don’t know what the fictional Dr. F might have done, but the author (that’s me) decided to drop to a 0.6 FTE part-time position in the fall of 2017]

What would you do if you were in Dr. Findley’s shoes?

56 thoughts on “A Fifth Physician: Dr. F & The Half Time Option”