None of us know the future.

We have models and predictions, and we can read the news and sometimes detect the foreshadowing, and there are things we can expect and things that are probable.

But at some point, we all have to acknowledge that our crystal balls are hazy and murky.

But should those unknowns, that uncertainty keep you from pulling the plug on your career, assuming the parts of your plan that you can control are indeed in place? 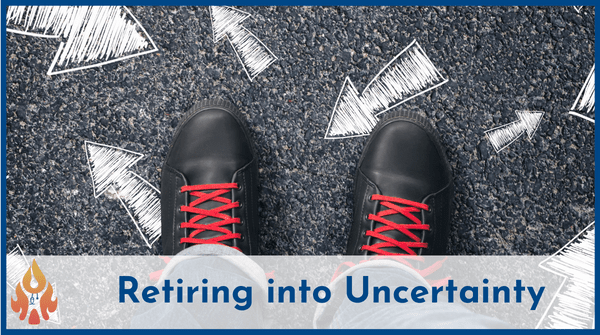 I always thought that once you worked hard enough, once you saved large enough, and once you invested long enough… you magically clear the hurdle of reaching ENOUGH and life is good.  All your troubles fade into the distance.  You have won the game.

I started out on this plan of working towards early retirement many, many years ago, before I even knew that I was doing so.

That early practice of saving for retirement from the beginning of my career helped instill the discipline of savings, which is really 90% of what you need to reach financial independence.  If you have the discipline to save, you can make a lot of mistakes along the way and have your savings to fall back on.  And that saving over time has helped us reach our goals of financial independence so much sooner.

But for a very long time, I struggled with the idea of what exactly I was saving for.  Sure, I knew in the abstract that you were supposed to save for retirement — after all, that’s what responsible adults (and especially professionals) do.  I was one of those professionals, or at least, that’s what I told myself.  And I had the law school debt to show for it.

But I just didn’t really think about it.  I just bought into the  general narrative that once you reached some magical age in your 60s, you were “allowed” by society to “retire” — to quit your job and sail off into the distance and enjoy your golden years in retirement.  I plodded along, diligently saving in our retirement accounts to fund a future “retirement,” although I didn’t have any idea when it would be or how much I would need to get there.

Math Was Not the Problem

I was decent at math in school, but I wasn’t that good.  I would’ve really struggled if I tried to be a math major in college.  So I got a B.A. instead — like lots of lawyers do — and it was way easier than majoring in math.

While I may have been fine with the computational aspects of math necessary to plan for early retirement, when it came to actually applying those basic math skills to calculating what I’d need to survive in retirement, I was at a loss.

I had never tracked my spending.  I didn’t know how much it would cost for me to live.  And there were so many variables: whether or not I’d get married, if I’d have kids, the cost of college in a couple decades, where we’d live, inflation, and so on. Those big uncertainties further complicated the basic questions of how much housing would cost and what I’d spend on transportation, food, and other necessities.

It all seemed so overwhelming.  So I did what a lot of people do in similar circumstances: I just didn’t think about it.

Complacency is Not Necessarily Bad for Early Retirement

I’m 43 years old right now.  Fortunately, each and every year I’ve been employed, I’ve maxed out my Roth IRA and contributed to my 401(k) when I was able.  I wish I could say that I maxed out my 401(k) every year I worked, but I didn’t.  When I started out as a young lawyer, the money was good, but I had law school debt to pay off and as a result, I didn’t max my 401(k) savings out.

But I didn’t understand then what I do now.

I didn’t understand that those dollars were going to be the most valuable I would ever earn.  With each year of our lives, the value of our earnings decreases with time because of compound interest.  An hour worked when we’re 20 is worth a lot more than an hour worked at 50 (no matter that the increase in the amount you’re charging for your time increases with your skill and experience).  The simple fact is that your skills can’t keep up with compound interest in the market.  Over time, whatever you save in your 20s will have a disproportionate stake in your net worth.  Whether you save in your 20s or you do not, your 70 to 80 year-old self will notice.

Nevertheless, I kept on saving and that snowball kept rolling.  Over time, it got pretty large.  And it got to the point where I really couldn’t argue with the math.  Using compound interest calculators for the next 20 years, I could see that we would have more than enough to fund a pretty lavish traditional retirement — even without adding anything more to our nest egg.

And then I turned to our taxable account.  We started piling as much money as we could into the taxable account to serve as a “bridge” between now and retirement age (age 59.5).  Over the past several years, our income had risen to the point where we were able to make substantial contributions to our taxable accounts — while still maxing our retirement accounts.  Coupled with great market returns over the past few years and a couple years of tracking our expenses, the math became undeniable.  We had enough to fund our lifestyle.  We could retire.

Over time, I became comfortable with the idea that we had saved and invested enough such that our family net worth was sufficient to cover our expenses so that neither me nor Mrs. Landshark would need to work anymore, and I pulled the plug.

As you may know, life doesn’t go according to plan.

I gave notice at the end of 2021, so in early 2022, I’d no longer be a partner in a law firm, and the work I’d do would be as a contract attorney, with no billable hours requirements and the ability to finish up a couple of cases that I’d been working on for the past few years, but with no obligation to take on additional new work.

It sounded like a good way to extract myself from the practice of law and I was looking forward to easing into retirement.

But then our community burned.

And the market dropped.

And then then market went down some more.

And then inflation numbers came in and they were worse than they’ve been in 40 years.

And then the Fed raised rates for the first time in 6 years.

So here we are.

I’m not worried.  I think we’ve saved an invested enough that we’ve given our finances enough padding that we should be able to weather any financial storm that may come along the horizon.  Maybe I’m being foolish or ignorant, but there’s always some looming catastrophe in this world that can provide us with a reason not to retire.

But if we let those events control our lives, we lose sight of our goals and we let time pass us by.  I know that in five years, I will regret not retiring way more than I would retiring.  So I’m retiring.  I can always go back to work.  I can always figure out a way to earn more money.  And my worst case scenario is most peoples’ everyday experience — going back to a 9-5.

That said, I really hope this current war doesn’t turn into a nuclear holocaust, but if it does, I doubt that I’d feel better if I was still employed.  Rather, I think I’d much prefer knowing that I spent my final days on this planet prioritizing my health and wellness, spending time with my wife and kids, and focusing on my interests and passions.  That, to me, seems like a way better thing to be doing, instead of just continuing to work a job for the safety and security of working a job.

PS – I apologize for taking so long to get another blog post out there.  After the fire, my life got really chaotic and I don’t think I’ve fully processed the trauma of the event.  I also found myself struggling with my drinking, so I’m in the process of making a life change and removing alcohol from my life.  I don’t know what the future will hold, but I know that as an alcoholic, I can’t let alcohol be a part of it anymore.  Thanks for your support.

1 thought on “Retiring into Uncertainty”