In 2014, I learned about financial independence, and I realized that I no longer had to save for retirement.

I had done a good job of doing so for nearly a decade with an anesthesiologist’s salary, and thanks to an early bear market followed by a lengthy bull market, I could afford to retire and maintain our lifestyle indefinitely.

That’s not the path I chose. I worked as an anesthesiologist for another five years and started a blog that became an online business that has largely replaced the income I had when I was outfitted with scrubs and a pager.

I continue to save for retirement, though. I’m not going to decline the government’s offer of certain tax deductions or spend every dollar I earn just because I can, but there is a certain beauty in knowing that I could. 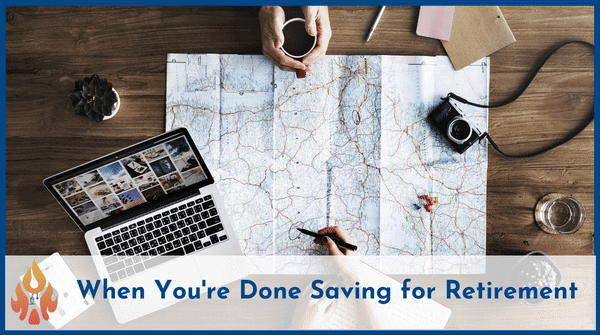 When Can You Stop Saving for Retirement?

How did I know I had saved enough?

A rule of thumb we often use in the financial independence (FI) community is that you should have a minimum of 25 years of expenses saved up before you can call yourself FI and afford to retire early (RE). If you never earn another dime, you can retire and draw 4% of your nest egg that first year in retirement and spend a similar inflation-adjusted amount each year thereafter, and you’ll have a low likelihood of running out of money.

A more conservative approach, which can be wise if you’re retiring young, have little ability to decrease expenses, or expect that your tastes may become more expensive one day, is to save 30 to 33 times your anticipated expenses for a 3.33% to 3% withdrawal rate.

These numbers are derived from papers published in the mid-to-late 1990s by William Bengen, Ph.D. and several professors from Trinity College. More recent and extensive analysis has been done by Karsten Jeske with Early Retirement Now and Wade Pfau of Retirement Researcher, two gentlemen using their doctoral degrees to help educate retirees.

To determine whether or not you’re truly FI, you must know how much you have and how much you spend, or, more precisely, how much you expect to spend once you’re no longer working. Some expenses will go up, and some will go down.

You can track both your net worth and annual spending manually with a spreadsheet or with the aid of technology with an aggregator like Personal Capital.

Now, once you’ve determined that you’ve attained FI status, what are you going to do about it?

Options. So Many Options.

This is an obvious option, and it’s a primary reason many people strive for FI. They want out of the rat race, and once they can afford to retire, they do.

What retirement looks like and how it’s defined is as nebulous as it is personal, but I think we can all agree that it means leaving the full-time career job you’ve got and not jumping immediately into another one. I like to think of “retire” as a verb — it’s something you do rather than something you are — and ideally, that action puts you in a better place with much more control over how you spend your time.

When you’re able to stop saving for retirement, you can choose to keep doing what you do, but do it less.

““Part-time work isn’t really an option in my field.” I often hear this from people who don’t realize the power that FI gives them. What better leverage is there in a negotiation than being able to walk away completely? Financial independence is the opposite of paycheck dependence, and when an employer realizes they can either have some of your time or none of it, they’ll often settle for some, even if they’d prefer it all.

I didn’t think I’d be able to work part-time in my small group of five employed anesthesiologists, but with the cooperation of the other four, we found a creative solution that worked for everyone, and I worked a 0.6 FTE schedule for most of my final two years in medicine.

Maybe you’re successful at what you do, but you don’t love what you do, and you’d rather do something different.

Do it! FI is your Get-Out-of-Jail-Free card for whatever cell, clinic, or cubicle you may be stuck in.

If you’ve always wanted to be a botanist, brewer, blogger, or butcher, there’s no time like the present.

You don’t have to transition to another job or career, either. You could go back to school to get an advanced degree, study a foreign language, or just enroll in a few classes to get season tickets at the student rate and start your own fraternity or sorority a la Old School.

I chose blogging as my first transition, and I may make another transition or two on a path that will eventually look more like a traditional retirement.

Let’s say you’ve got a $2 Million retirement nest egg and, based on spending $80,000 a year, you are financially independent. Yes, you could be done saving for retirement, or…

If you continue to work and save for retirement, based on a combination of investment returns and additional savings, you could have $2.5 Million in two to three years and closer to $3 Million in maybe five years or so.

Based on the 4% Rule (of thumb), you could upgrade your lifestyle to permit annual spending of $100,000 or $120,000 by deciding that you’re not yet done saving for retirement. Most high-income professionals who have managed to accumulate $2 Million by working, saving, and investing could reach $5 Million or more within ten more years with the investment portfolio itself doing much of the heavy lifting.

A splurge is not the same as an upgrade, although one could beget the other.

The upgrade option is more of an across-the-board lifestyle change. You’re less budget-conscious when shopping, traveling, and dining. It’s trading Aldi, the Fairfield Inn, and Denny’s for Whole Foods, J.W. Marriott, and Manny’s.

The splurge, on the other hand, is a one-time purchase that may not fit into your annual budget as prescribed by the 3% to 4% rule, but can be bought with additional money you’re making now that you no longer have to save for retirement.

Your splurge could be an object or an experience. A boat or a world cruise. A sports car or a trip to the Super Bowl.

One note of caution: either type of splurge could lead to an upgrade in your overall spending, as well. Boats need gas, as do sports cars. They may also require accessories and off-season storage. A world cruise may pique your interest in European river cruises, and no one says a Super Bowl experience has to be a once-in-a-lifetime thing.

We splurged on a tritoon (a pontoon with three floats) this year. We also bought a boat lift, trailer, and roll-in dock for it, too.

Next year, we’ll move into the bigger splurge, the new home we’re building right behind that dock and boat. These splurges come with an upgraded lifestyle and annual budget, but again, that’s the beauty of continuing to earn an income when you can be done saving for retirement. That money can be directed to new and improved things if you so desire.

Once you and your family are set for life, you’re in a great position to better the lives of others.

You certainly don’t have to be FI to be generous with your time or money, but it does make it easier to give when you know that giving will have no deleterious impact on your long-term financial goals.

Over 200 Billionaires have signed the Giving Pledge to donate at least half of their assets, and a number of them have publicly stated their intentions to give 90% or 99%.

You don’t have to be a billionaire to make giving a part of your financial plan, though. We’ve got about one half of one percent of the net worth of the least wealthy billionaire, but I set a goal of building up a donor advised fund equal to about 10% of our net worth prior to retiring from medicine and we’ve continued to grow that balance while giving from the fund(s). I suspect we’ll give far more than 10% eventually, but I felt that was a good starting point.

“If it ain’t broke, don’t fix it.” -my Dad and millions of others

If you’re happy with your life and career, and you wouldn’t change a thing, reaching financial independence may be a shoulder-shrug moment.

You can simply choose to maintain the status quo, and there are some tangible benefits to working “one more year” several times as I chose to do. Even if you don’t make any meaningful changes in your life, just knowing that you easily could can be comforting. There is a certain satisfaction in knowing that you can walk away whenever you want.

What Will You Do When You’re Done Saving for Retirement?

Financial independence is all about optionality. It gives you leverage and the upper hand in negotiations. How will you exercise that power?

What changes have you made or do you intend to make when you’ve finished saving for retirement?