We are just getting settled after nine days in Europe (look for a post about our travels on Tuesday), so travel will remain a prominent theme, but I’ve sneaked in a few money articles, as well.

I’ll be sharing our recent travel budget in a couple days. Millionaire blogger Michelle @ Making Sense of Cents shares her tips after life on the road in How to Travel on a Budget.

The Mad Fientist shared some tips of his own after two weeks gallivanting around Europe in Travel Hacking and Slow Travel.

I recently participated in an interview with Brian of Debt.com. Physician on FIRE Bikes to Work with the subheading “His neighbors don’t like “flashy” and he fits right in.” For the record, I admitted to biking only about half the year.

Remember that Proclaimers song, “I would walk 500 miles and I would walk 200 more…” Brian of Get Money, Got Money guest posted on Reach Financial Independence. What Hiking 700 Miles Taught Me About Money and Life.

Vanguard has slipped to 3rd place in terms of lowest cost index funds, and the EM physician known as Some Random Guy Online breaks down the new low cost leaders of the three fund portfolio in Low-Cost Investing: Is There a New Sheriff in Town?

Back to some frugal travel tips. Who knows more about travel than a flight attendant? Miss Mazuma shares what she’s learned in Traveling on a Dime… OK, 2!

J.D. Roth of Money Boss shared his tale of a year in a motorhome (I wanna do that!) with many fantastic stories and pictures on his personal blog called foldedspace: My 2015 Year in Review.

Money Can Buy Me Happiness. That’s the name of New Zealander Emma’s blog, and Emma shared What One Year of Travel Taught Me About Life. 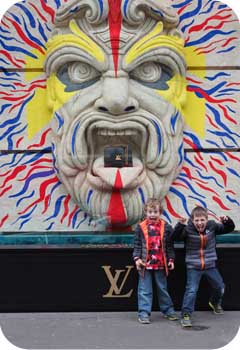 I’m feeling a bit jet-lagged, although the flight plans to and from Europe did a good job forcing us to get back on schedule right quick.

After being pleasantly surprised by the affordability of Paris and subsequently aghast at the cost of a burger and beer in Reykjavik, I wanted to take a minute to talk about the importance of knowing the relative strength of the dollar, and how that might affect your travel plans.

This is what the value of the Euro against the dollar looks like over the last 15 years.

In terms of the relative value of currency, this is the best time to visit Europe since 2003. Your dollar gets you at least 25% more Euros than it did just two years ago in 2015.

Iceland is part of Europe.

One might assume their currency, the Iceland Krona, has followed a similar path.

One would be wrong. 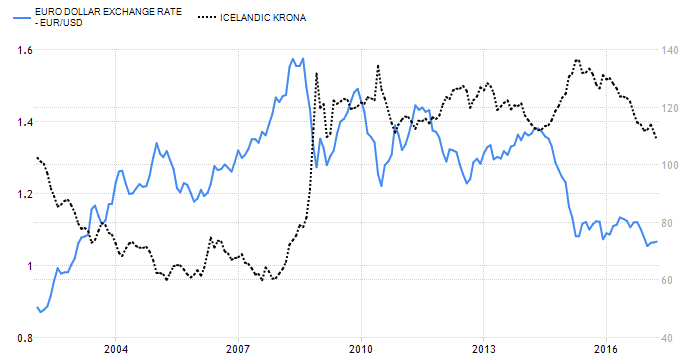 Compared to the relative strength of the Euro, Iceland was a pretty good deal from 2003 to 2008, and as recently as 2015, the two currencies paths intersected. In the last two years, the dollar when from buying 135 krona to 109 krona, a difference of about 25%.

So compared to 2015, you get 25% more for your US dollar in countries on the Euro, and 25% less for your dollar in Iceland. For this reason and also for weather-related reasons, I’m glad we spent the majority of our vacation in Paris.

We had a nice enough time, but I’ll be happier to visit Iceland again when the weather is better and the exchange rate is more favorable.