The four percent rule sure seems to get a lot of scrutiny. Is it too conservative? It is too generous?

And of course, scrutiny from all sides is a good thing. We need to stress test the factors going into decisions we make with long-lasting implications.

The best theories and rules survive this scrutiny.

But should we consider some external factors as well when applying a straight withdrawal rate rule to our retirement plans?

The FI Tax Guy thinks so, and explains more about his thinking in this post. 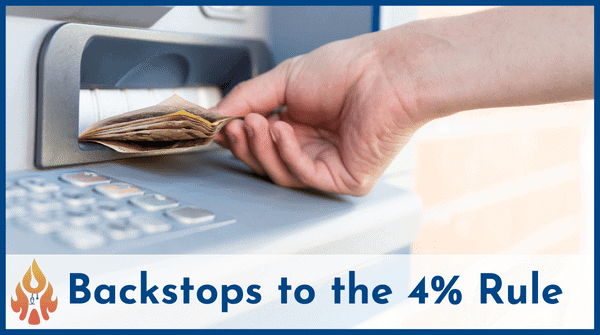 Worried about an early retirement based on the Four Percent Rule? Might the 4% Rule work because of the natural backstops most early retirees enjoy?

The 4% Rule is a rule of thumb developed by the FI community. For example, JL Collins writes extensively about the 4% Rule in Chapter 29 of his classic book The Simple Path to Wealth.

Boiled down, the rule of thumb states that an investor can retire when he or she (or a couple) has 25 times their annual expenses invested in financial assets (equities and bonds). They would then spend 4% of their wealth annually in retirement. The first year’s withdrawal forms a baseline and is increased annually for inflation.

The idea behind the 4% Rule is that the retiree would have a very strong chance of funding retirement expenses and thus would likely never run out of money in retirement. As a result, some refer to 4% as a safe withdrawal rate.

Here’s how it could look:

The 4% Rule has a nice elegance to it. Most investors aim for a greater than 4% return. In theory, with a 5% return every year, the 4% Rule would never fail a retiree. If you spend approximately 4% annually and earn approximately 5% annually, you have, in theory, created a perpetual money-making machine and guaranteed success in retirement.

The theory is great. But in practice, we know that investors are subject to ups and downs, gains and losses. What happens if there is a large dip in equity and/or bond prices during the first year or two of retirement? What if there are several down years in a row during retirement?

As a result of these risks, and stock market highs in late 2021, some are worried that the 4% Rule is too generous for many retirees. Christine Benz discussed her concerns on a recent episode of the Earn and Invest podcast.

Resources for the Four Percent Rule

Below I discuss what I believe to be the four natural backstops to the 4% Rule.

A 4 percent spending rate in retirement is not preordained from on high. Spending in retirement can be adjusted. Those adjustments can take on two flavors.

The first flavor is defensive spending reductions.  As Michael Kitces observed on an episode of The Bigger Pockets Money podcast, retirees will not blindly spend 4 percent annually without making adjustments in down stock markets.

See that the stock market is down 10 percent this month? Okay, take a domestic vacation for 6 days instead of an international vacation for 9 days. Buy a used car instead of a new car. Scale down and/or delay the kitchen remodel.

There are levers early retirees can pull that can help compensate for declines in financial assets while not too radically altering the quality of life.

The second flavor is, from a financial perspective, even better. As early retirees age, there will be natural reductions in spending. How many 80-year-olds decide to take a 12-hour flight to the tropics for the first time? There is a natural reduction in energy and interest in certain kinds of spending as one ages. It is likely that many retirees will experience very natural declines in expenses as they age.

For the early retiree under 62 years old, the 4% Rule must disregard Social Security. Why? Because Social Security does not pay until age 62, many in the financial independence community delay Social Security payments beyond age 62, perhaps all the way to age 70 (to increase the annual payment).

Here is an example of how that works.

Melinda is 55. She has accumulated $1.5M in financial assets and can live on $60,000 per year. If she retires at age 55 and lives off $60,000 a year increased annually for inflation, the only financial resources she has are her financial assets (what I refer to as her 4% assets). She cannot live off Social Security payments until age 62 and may choose to defer receiving Social Security up to age 70.

I previously wrote the following example:

An additional year of work for Chuck at a $130,000 salary netted Chuck only $557 more in annual Social Security benefits at full retirement age!

For example, a retiree might live in a 2,000-square-foot, $500,000 home with no mortgage. During their retirement, they might decide they don’t want to maintain such a large home, so they sell the 2,000-square-foot home and move into a 1,000-square-foot condominium at the cost of $350,000. The $150,000 difference in sale prices can become a financial asset to backstop 4% Rule assets and help the retiree succeed financially.

Alternatively, the early retiree could sell the $500,000 home and move into a smaller apartment with a $2,000 per month rent. While the retiree has increased their expenses, they also have created $500,000 worth of financial wealth to help pay that rent and fund their other expenses.

A third option is a reverse mortgage where the retiree stays in their primary residence but gets equity out of the home from a bank.

Real estate can serve as a natural backstop to help ensure retirees have financial security and success.

It’s wet blanket time. You may be considering a 30-, 40-, or 50-year retirement. Unfortunately, there is a good chance that you will not live that long. Sadly, not all early retirees have a long retirement.

As demonstrated in these tables, there is a real chance that an early retiree will not live for 25 or 30 years. That factors into whether or not the 4% Rule will work for an early retiree.

A not insignificant number of early retirees will have an early retirement that lasts (sadly) only 10 years, 15 years, or 20 years. That (again, sadly) backstops the 4% Rule.

I believe conventional retirees enjoy three of the four backstops. Sadly, they “enjoy” the mortality backstop to a greater degree than early retirees.

Robert is age 65 and is planning to retire on financial assets and Social Security. He will collect $36,000 a year in Social Security and will spend a total of $76,000 a year. To facilitate this, he will initially withdraw $40,000 from his $1M portfolio.

FI Tax Guy can be your financial planner! Find out more by visiting mullaneyfinancial.com

What do you think about the 4% rule? Sound off below.