I don’t write many guest posts these days, but when the site has 2.4 Million Twitter followers, I’m game. I tracked my spending in one random, recent week for Business Insider, and they wrote the lengthy, braggadocious headline: I’m a part-time doctor earning $250,000 a year and I plan to retire next year at age 43 — here’s what a week of my spending looks like.

Some would argue we spend too much; others think we spend too little. I’m like Goldilocks, and I think it’s just right. Or as Wealthy Doc would say, optimal. On his new site, the good doctor discusses Optimal Spending: Get a Bang for Your Buck.

The Financial Panther admits A Confession: I Cut Back On Saving (And I’m Kinda Broke Now). Is his family’s spending suddenly suboptimal, or could it be that they’ve invested in their future?

The Financial Panther rents out a spare room on Airbnb. He’ll appreciate the guide his neighbor in the Twin Cities put together. From “Cubert” and his Abandoned Cubicle, the 10,000 word masterpiece: How to Establish a Profitable Vacation Rental: The Definitive Guide

Why would these guys rent out their property to strangers who find them on the internet? In an attempt to transition from FD to FI, of course. In a post reminiscent of WCI’s 14 Milestones to Celebrate on the Path to Financial Independence (and Beyond!), Morgan Housel shares The Spectrum of Financial Dependence and Independence.

What does giving money away do for your bottom line? The Physician Philosopher shares his thoughts in Should I Tithe or Build Wealth? My answer is Yes, particularly in the broader sense of tithing as charitable giving to the charities of your choice.

Crispy Doc and his family are enjoying a “luxurious” trip in Greece. Why the quotation marks? It’s not a deluxe trip exactly, but the luxury comes in other forms. It’ll all make sense after you’ve read his musings On Luxury.

The Joneses take a different type of luxury vacation. They do a lot stuff that you and I might not do, as detailed by the lawyer behind Trapped in Work. Meet the (Real) Joneses.

Doc G of DiverseFI did. He really did! Growing Up Next Door to the Joneses.

My colleagues know that I’m out the door next year. Turning in the pager. Hanging up the stethoscope. Since that cat’s out of the bag, I don’t feel as compelled as I once did to keep my identity a secret. 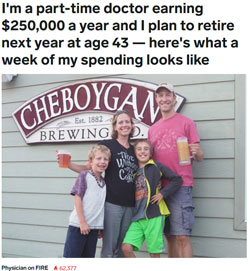 I’ve also spoken more freely recently about my eight years as a Golden Gopher at the University of Minnesota, and about our lives in northern Minnesota and northern Michigan.

The Business Insider article is the first time I’ve published a picture of our family online, and it didn’t take long for a medical school classmate of mine to reach out and say “hey” after seeing our smiling faces in his news feed.

Those who know me well probably won’t be all that surprised to hear I’m doing something out of the ordinary. It’s not unusual for me to do something unusual.

A lot of my blogging friends have had posts featured on really big sites like Yahoo! or Marketwatch. Those sites have comment sections, and I’m grateful Business Insider does not. Whenever someone speaks of their successes, the masses show up to crap on them.

It’s uncanny. Some  trolls just love to camp out on the internet and spew doubt and hate. I don’t know what to think of those attitudes. If your first instinct is to assume that someone who has succeeded at something is lying or cheating or obviously had every advantage you’ll never have, well, you’ll probably never be successful yourself.

While there were no comments on the article of mine, there were some comments on Twitter (check them out here and follow me here), and I had a little fun with them. What else can you do?

Even in the ChooseFI Facebook group, which should be friendly territory, there was some negative commentary on my article. Rather than be argumentative, I responded with a touch of Minnesota Nice.

In response to the “I can’t stand these articles…” comment, I responded with:

I didn’t write the headline, which sounds awfully boastful, but I did write the article.

The point is not to brag, but to demonstrate to other high-income professionals (admittedly, my target reader) that you don’t have to spend big bucks to live a good life.

I also wrote it to help drive traffic to my site to open the eyes of big spenders in my profession to the concept of financial independence. Many have no clue and keep spending more chasing happiness and burning out in the process by working exhausting hours to earn even more money to buy more stuff in a futile attempt to break the cycle.

I want my colleagues to know there’s another way.

I also monetize my website with ads and affiliate links, and the more I earn, the more I donate. Half of my profits go to charity, so leading people to my site and my e-mail list enhances that charitable mission.

Speaking of Facebook groups, if you’re a physician, join 6,200+ MDs & DOs discussing all topics related to FIRE in my Physicians on FIRE Facebook group.

And in the fatFIRE Facebook group, everyone is welcome. It’s the FIRE group for the less-than-frugal. Join us!

Camp FI Midwest is less than two weeks away. Although it’s been sold out for months, it looks like a spot has opened up, so if you want to hang out with a bunch of FI types for a long weekend, check to see if there’s a ticket available. You might get lucky! By that, I mean you might be able to buy a ticket. This is a PG event, and my kids will be there.

I’ll be heading down a day early to check out the Great Minnesota Get-Together, a.k.a. the State Fair a.k.a. the place where everything, and I mean everything, is deep fried and on a stick. There’s also a beer garden and a few of us will be meeting up to sample the offerings around 5 p.m. on opening day, which is Thursday, August 23rd.

I’ve heard rumors about a meetup at Brit’s Pub later that evening. I may have started that rumor. It’s a cool place with rooftop lawn bowling, fish and chips, and it’s right in downtown Minneapolis. See you there?

Have a wonderful week!