Jesse has had as many birthdays as Baskin Robbins has flavors of ice cream. That’s 31 to be precise.

From my perspective as a guy in his mid-forties, 31 is still pretty young, but the guy shows he’s picked up some solid wisdom in his 31 trips around the sun.

My favorite part of this post is not the fact that he tells us 31 lessons he’s learned, but the fact that he has for each year he was alive. Apparently, he’s got an impeccable memory. How well do you remember your newborn months? 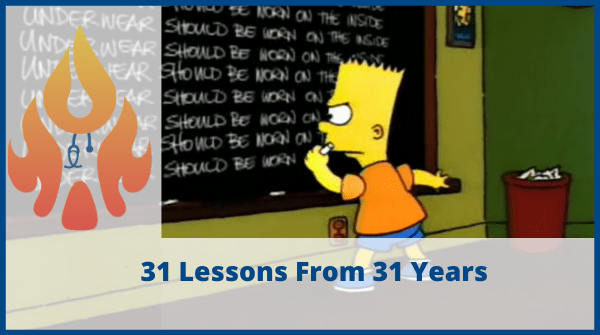 Let’s get the lame stuff out of the way. I turn 31 on Monday. Yippee!

Last year, I wrote about the amazing growth that can occur in a single decade. Here’s that article: A Lot Can Change in Ten Years.

But for this 31st birthday, I went back and considered 31 valuable lessons that coincide with each year of my life. Some are specific to personal finance and investing, while others are general. Here we go…

I, like you, was a helpless little butterball. Thankfully, human parents make huge sacrifices to help their helpless kids (thanks mom and dad!). Thank your parents 🙂

But that courtesy ends at some point. Eventually, you’ve got to learn to help yourself.

2) Be Nice to Bigger Fish

I was the youngest of three boys. If I didn’t play nice with my brothers, I might get shoved down in the snow.

The same thing happens in adulthood, but the shove and the snow look a little different. 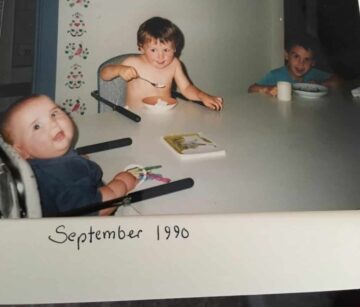 Life is better with cake. Or whatever your version of cake might be. If we can’t eat cake, then what’s this all about?

Some of my earliest memories at home involve playing games—rummy, Parcheesi, Magic: The Gathering—with my parents or brothers.

Games are more than just games.

5) Some People Want to Watch the World Burn

In kindergarten, Eric (still one of my best friends) and I built a sick tower out of foam blocks. And then Robert came over with zero hesitation and kicked the tower.

Our creation was strewn about the carpeted floor. Our 12 minutes of work turned to rubble,

1st-grade involved forays into arithmetic. It came easily to me. P.S. 6-year olds don’t “outwork” other 6-years olds to get good at multiplication…it’s just the luck of the draw.

But I also learned in first grade that I liked helping people understand their multiplication.

Embarrassed about I-don’t-remember-what, I threw a kickball (in anger!) at my gym teacher when she tried to console me. Sorry Mrs. Markowski!

Teachers, it turns out, disapprove of students hurling kickballs at them. I compounded one small negative with a much larger one.

I was a good student, so getting a C on a math test in 3rd-grade was devastating. I did not have the tools to deal with (what I deemed) a massive failure.

9) Some Things Aren’t Worth Learning

In the 1990s (and maybe still today), New York’s 4th-graders spend a month of Social Studies lessons learning about the architectural aspects of Iroquois longhouses.

Anthropology is important. Understanding other cultures is vital. But I shudder when comparing the millions of people-hours (not an exaggeration) spent on Iroquois longhouses versus the utility of that knowledge in our lives today. Thatched roofs aren’t that important.

10) The Eye of the Beholder

During one of Mr. Gill’s entertaining 5th-grade science lessons, I yawned right in front of him. To me, it was a simple, innocent yawn. I was tired!

But when I saw Mr. Gill’s reaction, I immediately knew I had done something wrong. I paused, retraced my previous five seconds, and realized,

“Oh no. Oh no. Mr. Gill interpreted my yawn as disrespect. That I was openly and rudely signaling boredom.”

I quickly apologized and assured him I meant no harm. And thankfully, he saw my sincerity.

What an amazing lesson. Intentions matter, but so does the way our intentions are interpreted. And sincere apologies matter too.

Mr. Leone’s 6th-grade social studies classroom. That’s where I was when we turned on the TV to see the Twin Towers fall on September 11, 2001. Where were you?

Some events are unforeseen, unpredictable, and yet have colossal consequences. These are black swans.

We had a new kid at school who was so cool. Within a couple days, he felt like an old friend.

And within a month, he turned out to be a real dick. Oops.

First impressions can fool you.

Our 8th-grade math teacher—Mrs. Sweet—had a reputation for being strict. Yes, reader, it is ironic that Mrs. Sweet did not have a sweet reputation.

But she was the best math teacher I ever had. Learning algebra from her was so easy. Maybe because we were all scared to death about goofing off.

Hey, it worked! Strict = structure, and many humans need structure.

In 9th-grade English, one of my classmates got into an argument with the teacher. He (the student) was sent to the principal’s office for punishment. Instead of complying, he opened up the classroom window, hopped out, and walked to the local diner.

At the time, I could never imagine doing this. But that’s because he and I lived different lives.

To him, the point of school—this lesson, this assignment, this discipline—wasn’t worth understanding. Looking back now, I get it. I understand (at least a little bit) his point of view.

I played basketball my entire childhood. I felt I was a shoo-in to be a starting guard on the junior-varsity basketball team in my freshman year.