Spend less. Live more. Are these commands compatible or does one suggestion negate the other?

Alexander Hamilton was famously taught to talk less and smile more. It worked for him. I think my ideas could work for you.

The YOLO (you only live once) crowd mistakenly equates spending to living and living to spending as if they were one and the same. I’m here to tell you they’re not the same at all; when you dial down the spending, you’ll be able to live more.

It’s true that you only live once, and you want to make the most of the one life you’ve been granted. That’s all the more reason to spend wisely and get the most for your hard-earned dollars, allowing for time freedom all the more quickly. 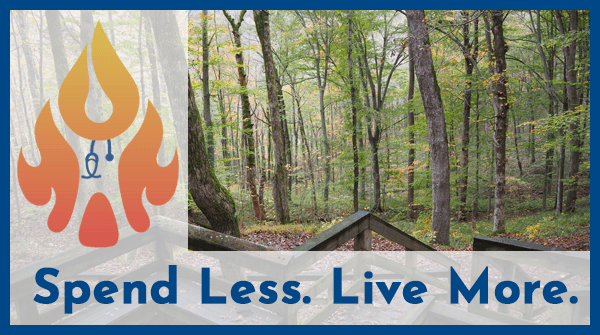 No one likes to be told to spend less. It can feel like an assault on one’s current lifestyle. If lifestyle is important to you, though, this may be the message you need to hear.

Ideally, this message of relative frugality gets to you before you’ve ramped up your standard of living to one that requires spending the vast majority of your income. It’s much easier to stay off the hedonic treadmill or keep it going at a slow speed than it is to hop off once it’s hit ludicrous speed.

My version of relative frugality for the high-income professional does not have to look like living like a student or a resident. You can trade Top Ramen, rice, and beans for arugula, steak, and potatoes or sushi or whatever you fancy.

Most physicians can afford to live on half their takehome pay and still spend quite a bit more than the average U.S. household. The majority can both save and spend six figures annually. It is tougher when you earn less, but we’ve learned that even a single primary care physician with a salary below $200,000 a year can build real wealth in short order.

Think about some of the best parts of your day. How much does it cost to enjoy a leisurely cup of coffee, play a game with your children or nieces and nephews? To take a hike through the mountains or a stroll along the beach?

I’ve had the opportunity to taste that good life that most people, including a younger me, often daydream about. The pampered life with all of the finer things.

Yes, I’ve drunk Dom Perignon from the bottle like a boss, sipped Opus One with one pinky raised, and I’ve stayed at my share of 4 and 5-star hotels and resorts.

I’m not going to pretend that these things aren’t any better than the 3-star experiences and more modestly priced inebriants. However, I’m not convinced that staying atop the 4 Seasons for $1,000 a night gives you 10 times the value of the $100 a night 3.5-star Hilton.

The wine value is far more questionable. There is fascinating research that our perceived experience with the cabernets and chardonnays is flavored far more by what we’re told it cost than the actual quality of the wine. Even better, when a white wine is dyed red, wine experts will describe the nose as taste as having all the characteristics of a true red wine.

I’m not saying we can’t have nice things. If you cut back anywhere and everywhere possible, you could find you’re not enjoying life no matter how much progress you’re making financially.

Similarly, The Physician Philosopher’s “backward budgeting looks like this: (1) define your big picture financial goals, (2) pay your future self first, (3) automate your financial goals, and then to (4) spend lavishly on the money that is left!

Dine at the French Laundry. Take that trip to Tahoe with the ski-in, ski-out townhome. Upgrade to the VIP tent at the beer fest.

Just don’t take the most expensive option at every turn in your life. Make it a treat and you can still meet your money goals.

The Loose Correlation Between Spending and Happiness

Don’t take my word for it. Like a good scientist, look at the data.

We’ll start with an examination of the 2020 World Happiness Index ChECK, an annual survey that measures the reported happiness of the people in different nations based on a variety of variables.

On the whole, there is a trend for wealthier countries to have happier people and impoverished nations to have fewer contented people. However, the richest nations and cities are not the happiest, and some places where people earn far less have much happier people than the most developed nations.

For example, people in Mexico City reported a higher “Current Life Evaluation” score than people in places like Paris, Dubai, and Barcelona in the 2020 World Happiness Report.

Here in the U.S., we don’t seem to be getting any happier despite substantial wealth gains over the past decade. The decline is most pronounced in children and adolescents, and the role of social media has been questioned as a driver of this unfortunate trend.

It’s been more than a decade since Danil Kahneman and Angus Deaton published the article High income improves evaluation of life but not emotional well-being, establishing the loose connection between income and happiness. The conclusion was that “high income buys life satisfaction but not happiness, and that low income is associated both with low life evaluation and low emotional well-being.”

The number at which happiness failed to rise with higher income was $75,000 in 2010. Inflation has pushed that closer to $100,000 in the 2020s, but you’ll still hear the $75,000 quoted quite often. If you read the study, you’ll note that life satisfaction, as measured by the study, did continue to rise with rising income, but we see diminishing returns with small incremental increases even with large steps up in income.

“We infer that beyond about $75,000/y, there is no improvement whatever in any of the three measures of emotional well-being. In contrast, the figure shows a fairly steady rise in life evaluation with log income over the entire range; the effects of income on individuals’ life evaluations show no satiation, at least to an amount well over $120,000.” – Kahneman & Deaton, 2010

One challenge in interpreting a study like this is the fact that it’s based on income and not spending or net worth. I believe, and this is somewhat based on my own experience and that of people I’ve gotten to know in the FIRE community, that net worth increases may boost happiness and life satisfaction as much or more than income or spending.

Note that spending and net worth gains are inversely correlated, especially in the accumulation phase of wealth-building. A dollar spent is a dollar not saved or invested.

If you studied physiology, you may recall Frank Starling’s curve demonstrating the relationship between preload (the patient’s volume status) and cardiac output. As preload, as measured by LVEDP increases, cardiac output increases up to a point.

There comes a point where output plateaus and then begins to decrease as the heart is overloaded and slips into heart (systolic?) failure.

Replace preload with spending and cardiac output with happiness, and I think you get a nearly identical curve. 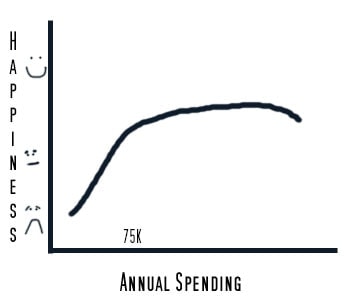 When your baseline is to not spend much at all, as you open up your wallet, you can really improve your life and life experiences in meaningful ways.

Once you’re spending most of your paycheck, assuming that’s a six-figure sum for a high-income professional, you begin to see diminishing returns.

As your level of spending, the preload equivalent, reaches a tipping point, you might not be saving for retirement at all. You could be taking on credit card debt. You may be committing financial infidelity by hiding your true financial status from loved ones.

This is the downslope on the curve where more spending leads to more stress and decreasing happiness. A drastic change is in order here. It could mean earning more or spending less. Some combination is probably best.

When you spend less, you can live more. How so?

First, when you create a wide gap between what you earn and what you spend, it’s actually much easier to say yes to one-time expenditures. If you take that spur-of-the-moment trip to the Bowl Game, and your savings rate drops from 50% to 45%, the consequences are relatively inconsequential as compared to lowering your savings rate in half from 10% to 5% when you’re living right up to your means.

More important is what happens after a decade or two of living well while spending less. For great detail, see The Tale of 4 Physicians. In summary, one can reach financial independence, that is, the ability to live your life as you choose without any need to earn money indefinitely, in about 15 years.

At that point, you might choose to cut back and work part-time. You can work in academics or spend more time volunteering. You could try out a completely different career, start a business, or retire completely.

If you’ve wanted to travel the world and never found the time, you’ve got all the time in the world. Take advantage. Live more.

I’ve been more of a maximalist than a minimalist most of my life, but after moving more times than I care to admit, I’ve begun to appreciate the benefits of minimalism.

A few years back, before our most recent move, I got rid of half of my clothing. I haven’t missed one garment.

“The things you own end up owning you. It’s only after you lose everything that you’re free to do anything.” – Chuck Palahniuk, Fight Club

I don’t like to spend my free time troubleshooting, repairing, cleaning or organizing my things. Maybe you’re different, but I prefer a life without chains.

How to Spend Less

If you agree with the premise of spending less but are unsure where to start, I can share some tips.

You can borrow some of my frugal weirdo tendencies. Track your spending with Personal Capital or Mint to establish a starting point.

Learn to budget with the wildly popular You Need a Budget (YNAB) or try Dr. James Turner’s anti-budget.

Buy fewer things. Take longer, more affordable trips. Get flight alerts from Scott’s Cheap Flights and go to Mexico for $200 or Europe for $400 round trip like we have.

If your goal is to live more, you’ll find what works best for you and your family.

You’ll find that you smile more, too. You’re welcome.